Flow diagram of referrals from community pharmacies in Gujrat, Lahore, and Sheikhupura. 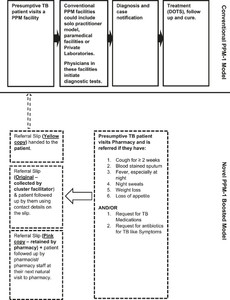 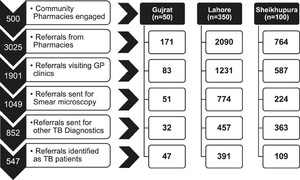 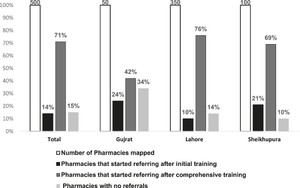 Globally, Pakistan ranks fifth in terms of missing tuberculosis (TB) patients’ burden. Missed TB cases are either undiagnosed or diagnosed but not notified to the national TB database. Public–private mix interventions are contributing significantly to the case detection, diagnosis, and treatment of TB in Pakistan. However, it is estimated that many cases of infected TB patients go undetected. It is likely that these “undiagnosed” active TB cases seek treatment from community pharmacies, among other venues. This study aimed at assessing the feasibility of community pharmacy–based TB case detection. Case detection protocol implementation in three Pakistani districts in a nonrandom selection of pharmacies was followed by a review of routinely maintained prospective records of patients referred from these private community pharmacies to general practitioner (GP) clinics. The study engaged 500 community pharmacies for referring presumptive TB patients to GP clinics. In total, 85% of the engaged pharmacies remained active in providing referrals during the study period. The community pharmacy–referral network achieved an annual referral rate of 3,025 presumptive TB patients and identified 547 active TB cases for the period January–December 2017. Every fifth referral among presumptives presenting and counseled at pharmacies was diagnosed with TB at GP clinics. This contribution was 9% of all new TB cases identified in these districts through all other private venues linked with the Greenstar Social Marketing setup. Identified barriers and facilitators to implementation and cost effectiveness of pharmacy models for TB case detection should be considered if the model were to be scaled up.