Selection of the nerve for biopsy.

Bar diagram showing the type of leprosy based on the nerve histopathology findings. 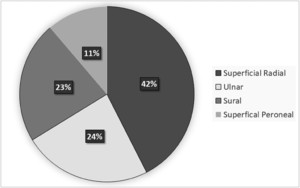 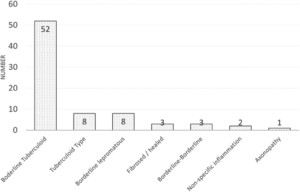 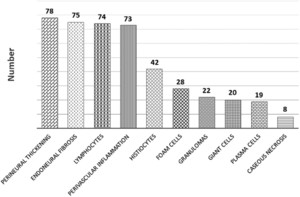 Identification of Mycobacterium leprae DNA by polymerase chain reaction (PCR) is a reliable and an affordable method to confirm leprosy. DNA from 87 nerve samples (61 from paraffin blocks and 26 fresh samples) was extracted. Mycobacterium leprae DNA was amplified by PCR from 80/87 (92%) specimens. Patients were seen over a period of 11 years (2007–2019), and leprosy was diagnosed based on clinical and characteristic histopathology findings. The clinical diagnostic possibilities were as follows: leprous neuropathy in 73/80 (91.3%), mononeuritis multiplex of unknown etiology in four (5.0%), vasculitic neuropathy in two (2.5%), and distal symmetric sensory motor neuropathy in one (1.3%). The biopsied nerves were as follows: superficial radial = 34 (42.6%), dorsal cutaneous branch of ulnar = 19 (23.8%), sural = 18 (22.5%), and superficial peroneal = 9 (11.3%), and corresponding neurological deficits were recorded in 77 (96.3%) cases. The histopathological diagnoses in total group were as follows: (borderline tuberculoid (BT) = 52, tuberculoid (TT) = 8, borderline lepromatous (BL) = 8, borderline borderline (BB) = 3, nonspecific inflammation = 3, healed/fibrosed = 4, and axonopathy = 2). Acid fast bacilli (AFB) was demonstrated in 11 (13.7%) samples. For comparison, 31 clinically and histopathologically defined non-leprous disease control nerves (inherited neuropathy = 20, vasculitis = 8, and nutritional neuropathy = 3) subjected to PCR were negative for M. leprae DNA. In most instances, there are multiple thickened peripheral nerves in suspected cases of leprosy, but neurological deficits pertaining to the thickened nerve are not as widespread. The current findings emphasize the importance of selecting the most appropriate nerve for biopsy to obtain a positive PCR result. We infer that clinical, histopathological, and PCR tests complement each other to help achieve a definitive diagnosis of leprosy particularly in pure neuritic leprosy and in leprous neuropathy with negative skin smears/biopsy.