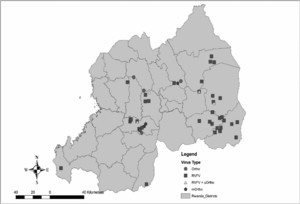 In 2018, a large outbreak of Rift Valley fever (RVF)–like illness in cattle in Rwanda and surrounding countries was reported. From this outbreak, sera samples from 157 cows and 28 goats suspected to be cases of RVF were tested to confirm or determine the etiology of the disease. Specifically, the hypothesis that orthobunyaviruses—Bunyamwera virus (BUNV), Batai virus (BATV), and Ngari virus (NRIV)—were co-circulating and contributed to RVF-like disease was tested. Using reverse transcriptase-polymerase chain reaction (RT-PCR), RVFV RNA was detected in approximately 30% of acutely ill animals, but in all cases of hemorrhagic disease. Seven cows with experienced abortion had positive amplification and visualization by gel electrophoresis of all three segments of either BUNV or BATV, and three of these were suggested to be coinfected with BUNV and BATV. On sequencing, five of these seven cows were conclusively positive for BUNV. However, in several other animals, sequencing was successful for some but not all segments of targeted viruses BUNV and BATV. In addition, there was evidence of RVFV–orthobunyavirus coinfection, through RT-PCR/gel electrophoresis and subsequent Sanger sequencing. In no cases were we able to definitely identify the specific coinfecting viral species. This is the first time evidence for orthobunyavirus circulation has been molecularly confirmed in Rwanda. Furthermore, RT-PCR results suggest that BUNV and BATV may coinfect cattle and that RVFV-infected animals may be coinfected with other orthobunyaviruses. Finally, we confirm that BUNV and, perhaps, other orthobunyaviruses were co-circulating with RVFV and contributed to the burden of disease attributed to RVFV in Rwanda.