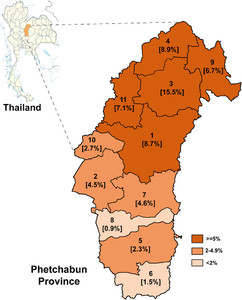 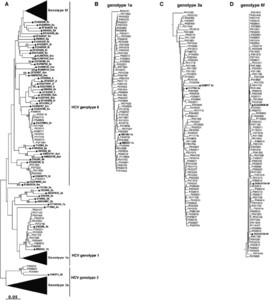 Prevalence of Hepatitis C Virus in an Endemic Area of Thailand: Burden Assessment toward HCV Elimination

Chronic hepatitis C virus (HCV) infection can lead to liver cirrhosis and hepatocellular carcinoma. To eliminate HCV infection in an endemic area, an epidemiological baseline of the current HCV infection in the population is required. We therefore aimed to evaluate the HCV burden in the Thai Province of Phetchabun, which has the highest HCV infection rate in the country. Toward this, a province-wide district-based representative sampling of 4,769 individuals ages 35–64 years previously shown to represent high-risk age-groups were tested for anti-HCV antibodies using the automated chemiluminescent microparticle assays. Active HCV infection and subsequent genotyping were determined from serologically reactive samples by amplification of the HCV core gene. We found that 6.9% (327/4,769) were anti-HCV positive, of which 75.8% (248/327) had detectable HCV RNA and 5.8% (19/327) were in the presence of hepatitis B virus coinfection. Nucleotide sequencing and phylogenetic analysis revealed that HCV genotype 6 was the most prevalent (41%, 101/248), followed by genotype 3 (31%, 78/248), and genotype 1 (28%, 69/248). Socioeconomic and demographic factors including male gender, education, and agricultural work were associated with HCV seropositivity. From these results, we defined the regional HCV genotypes and estimated the HCV burden necessary toward the implementation of pan-genotypic direct-acting antivirals, which may be appropriate and effective toward the diversity of genotypes identified in this study. Micro-elimination of HCV in Phetchabun may serve as a model for a more comprehensive coverage of HCV treatment in Thailand.