Health districts and polyclinic administrative catchment (PAC) areas in Barbados. This figure was produced in ArcMap 10.4 (ESRI) using shapefiles from the GADM database of Global Administrative Areas, v. 2.8 (gadm.org), and shapefiles provided by the Ministry of Health, Barbados.

Patterns of clustering (red) and dispersion (blue) of annual dengue case totals were found at the level of health district in Barbados in 2013 and 2016, as determined by Local Moran’s I. Spatiotemporal areas of low disease risk in monthly cases (blue circles), found via Kulldorff’s spatial scan statistic, were found in both years. This figure was produced in ArcMap 10.4 (ESRI).

Patterns of clustering (red) and dispersion (blue) of EB smoothed annual dengue rates were found at the level of health district in Barbados for all years of the study, as determined by Local Moran’s I. Spatiotemporal areas of low disease risk in monthly cases (blue circles), found via Kulldorff’s spatial scan statistic, were found in 2013 and 2016 for dengue. This figure was produced in ArcMap 10.4 (ESRI). 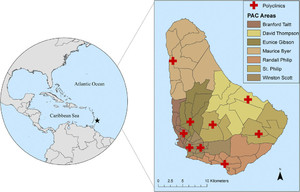 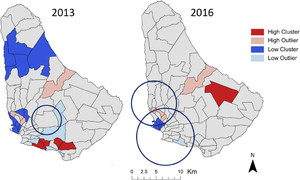 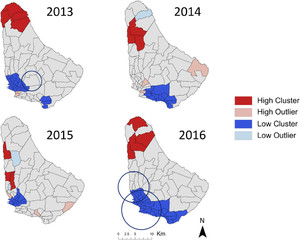 Spatiotemporal Tools for Emerging and Endemic Disease Hotspots in Small Areas: An Analysis of Dengue and Chikungunya in Barbados, 2013–2016

Dengue fever and other febrile mosquito-borne diseases place considerable health and economic burdens on small island nations in the Caribbean. Here, we used two methods of cluster detection to find potential hotspots of transmission of dengue and chikungunya in Barbados, and to assess the impact of input surveillance data and methodology on observed patterns of risk. Using Moran’s I and spatial scan statistics, we analyzed the geospatial and temporal distribution of disease cases and rates across Barbados for dengue fever in 2013–2016, and a chikungunya outbreak in 2014. During years with high numbers of dengue cases, hotspots for cases were found with Moran’s I in the south and central regions in 2013 and 2016, respectively. Using smoothed disease rates, clustering was detected in all years for dengue. Hotspots suggesting higher rates were not detected via spatial scan statistics, but coldspots suggesting lower than expected rates of disease activity were found in southwestern Barbados during high case years of dengue. No significant spatiotemporal structure was found in cases during the chikungunya outbreak. Spatial analysis of surveillance data is useful in identifying outbreak hotspots, potentially complementing existing early warning systems. We caution that these methods should be used in a manner appropriate to available data and reflecting explicit public health goals—managing for overall case numbers or targeting anomalous rates for further investigation.