Incidence of dengue per 100,000 population residing within the geographical boundary of peripheral VBDCP units in Surat city, Gujarat, India, 2012–2016. 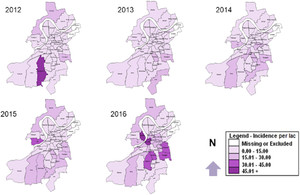 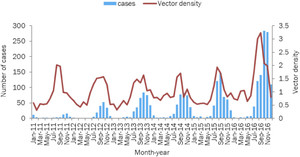 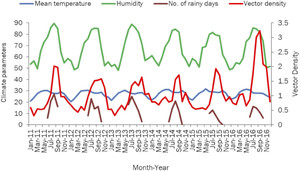 Burden of Dengue with Related Entomological and Climatic Characteristics in Surat City, Gujarat, India, 2011–2016: An Analysis of Surveillance Data

We estimated the incidence of laboratory-confirmed dengue patients for Surat city, India, using surveillance data from 2011 to 2016 and described the related entomological indices and climatic factors. There was a rise in incidence from 1.5 to 17.6 per 100,000 population, as the numbers of notified cases have increased because of better surveillance system. The case notification was 1.3 times higher for the public sector than the private sector. The larval indices were below the transmission level (House index, Breteau index < 1%). The median age of dengue patients was 20 years (IQR: 14–28), with a male to female ratio of 1.6:1. Five peripheral vector control units contributed to 1,013 (41.4%) confirmed cases with rising incidence in other units also. The number of dengue patients peaked during post-monsoon. Spearman’s correlation of vector density with humidity (rs = 0.556), rainfall (rs = 0.644), and number of cases (rs = 0.708) suggested climate favorable for vector breeding. There is a good system of public–private coordination for dengue surveillance. However, there is a need to reassess the vector indices threshold for transmission in the city.