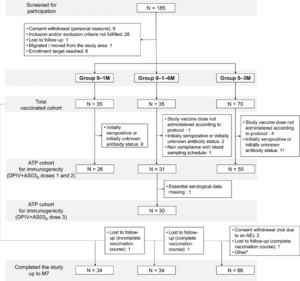 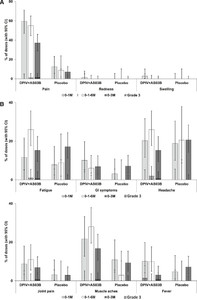 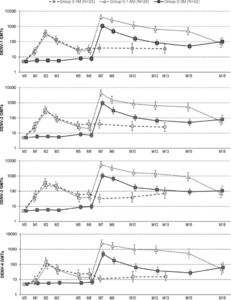 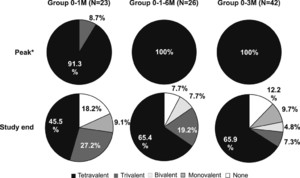 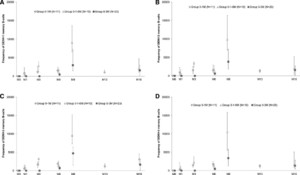 Dengue disease and its causative agents, the dengue viruses (DENV-1–4), cause high morbidity in tropical and subtropical regions. We evaluated three dosing regimens of the investigational tetravalent AS03B-adjuvanted dengue-purified inactivated vaccine (DPIV+AS03B). In this phase 1/2, observer-blind, placebo-controlled study (NCT02421367), 140 healthy adults were randomized 1:1:2 to receive DPIV+AS03B according to the following regimens: 0–1 month (M), 0–1–6 M, or 0–3 M. Participants received DPIV+AS03B or placebo at M0, M1, M3, and M6 according to their dosing schedule. Primary objectives were 1) to evaluate the safety of DPIV+AS03B for 28 days (D) after each dose; 2) to demonstrate the added value of a booster dose (0–1–6 M versus 0–1 M) based on neutralizing antibody titers to each DENV type (DENV-1–4) at 28 D after the last dose; and, if this objective was met, 3) to demonstrate the benefit of a longer interval between the first and second doses (0–1 M versus 0–3 M). Adverse events (AEs) within 7 D after vaccination tended to be more frequent after DPIV+AS03B doses than placebo; the number of grade 3 AEs was low (≤ 4.5% after DPIV+AS03B; ≤ 2.9% after placebo), with no obvious differences across groups. Within 28 D following each dose, the frequency of unsolicited AEs after DPIV+AS03B appeared higher for three-dose (0–1–6 M) than two-dose (0–1 M and 0–3 M) regimens. No serious AEs were considered related to vaccination, and no potential immune-mediated diseases were reported during the study. All three schedules were well tolerated. Both primary immunogenicity objectives were demonstrated. The 0–3 M and 0–1–6 M regimens were more immunogenic than the 0–1 M regimen.