Illustration of the result of the analysis, including overarching theme, categories, and subcategories.

Schematic illustration of the outcome of the analysis as described by three categories and their respective subcategories. Some subcategories are more connected than others, as illustrated by their position in the figure. 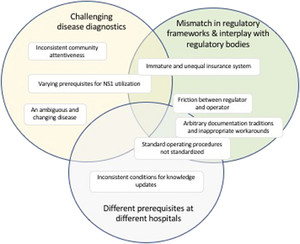 The incidence and geographical distribution of dengue fever has increased in recent decades. The actual disease burden is unknown owing to frequent underreporting and misclassification of cases. A well-functioning system for diagnosing, treating, and reporting cases is of prime importance as disease statistics is the foundation for decisions aiming to control the disease. This study aimed to explore the hospital-based disease surveillance system in Yogyakarta, a dengue-endemic region on Java, Indonesia. Semi-structured interviews were performed with 16 informants from four hospitals, including five general practitioners, three internists, four pediatricians, and four administrative staff working with administration relating to dengue diagnostics and reporting. Data were analyzed using content analysis. A theme arose from the analysis “Dengue surveillance stands and falls by the rigor of the health system.” The theme, and underlying categories and subcategories, describes a surveillance system that in the best-case scenario works well and is likely to produce reliable dengue case data. However, there is a lack of synchronization between regulations and guidelines in different hospitals and some friction between regulatory bodies and the care provider. Knowledge among the staff appears to vary, and many clinical and financial decisions are made rather arbitrarily, which ultimately might lead to unequal health service delivery. In conclusion, the dengue surveillance system under study could improve further, particularly by ensuring that all regulations and recommended procedures are standardized and that all staff are given the best opportunity to stay updated on dengue-related matters, clinical as well as regulatory, on a regular basis.