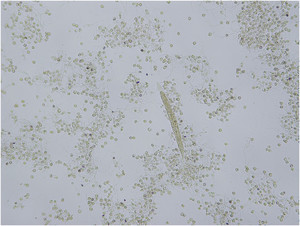 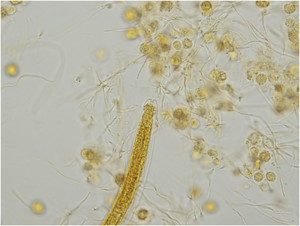 Strongyloidiasis is a disease caused by the parasite Strongyloides stercoralis in humans. We present a case of incidentally discovered Strongyloides urinary tract infection in a patient in whom there was a urologic surgery consisting of urinary diversion created by self-bowel transplantation and conduit creation. Historical review demonstrated eosinophilia before surgery and detection of the parasite. Social review demonstrated endemic exposure. Our patient’s case was differentiated from hyperinfection by the presence of rhabditiform larvae, and not filariform larvae, in the urine, suggesting localized small bowel infection was transferred to the urinary tract secondary to the creation of the ileal loop conduit. This patient’s clinical course improved with antibiotic treatment of the bacterial infectious complications of surgery and resolution of Strongyloides infection with ivermectin. To our knowledge, this is the first case of Strongyloides infection of the urinary tract secondary to ileal loop conduit creation and not as a result of hyperinfection.

A 71-year-old male with the left pelvic kidney and history of prostate cancer presented to the emergency department with fevers, abdominal pain, nausea, and diarrhea. He was not immunosuppressed. Several months before presentation, he had a subtotal cystectomy with the creation of an ileal conduit to treat urinary incontinence secondary to complications from prior prostate cancer treatment. His postoperative course was remarkable for early readmission on postoperative day 7 with an intra-abdominal fluid collection at the ventral incision site, an enterocutaneous fistula, and skin breakdown around the newly created stoma. This was managed conservatively with antibiotics, bowel rest, and total parenteral nutrition. The patient gradually improved and was discharged to subacute rehabilitation. While there, he developed the symptoms leading to this repeat presentation.

On arrival to the hospital, the patient was febrile to 101.2°F. Blood pressure was 103/64, pulse 81, respiratory rate 18, and oxygen saturation 94% on room air. Physical examination demonstrated a healthy right lower quadrant stoma, granulation tissue surrounding the ventral surgical wound and enterocutaneous fistula, and mild left lower quadrant abdominal tenderness. Abdominal computerized tomography scan re-demonstrated an enterocutaneous fistula, resolution of the previously identified fluid collection, and stranding around the left pelvic kidney consistent with acute pyelonephritis. Blood count and chemistries were sent, and blood and urine (from stoma) cultures were obtained. Laboratory tests were remarkable for a white blood cell count of 16.5 × 109/L (normal 4–10 × 109/L), with 76% neutrophils (normal 49–74%) and 7% eosinophils (normal 0–5%). The patient was treated empirically with aztreonam, given prior antimicrobial susceptibility test results and a history of penicillin allergy. While awaiting results, the microbiology laboratory called and requested an additional urine sample because an unusual element was identified on automated urinalysis and visualized by subsequent microscopy (Figure 1). Repeat urine microscopy confirmed the presence of small roundworms noted in the previous sample, identified as Strongyloides stercoralis. Fecal examination was subsequently performed and also demonstrated S. stercoralis. Review of the urine Strongyloides morphology confirmed that these were rhabditiform (not filiariform) larvae (Figure 2), for reasons detailed in the discussion. Given the presence of Strongyloides larvae in the urine, the possibility of hyperinfection was increased but was deemed unlikely because of the recent surgery and rhabditiform morphology. He was treated with ivermectin for 5 days. Urine and stool were analyzed for several days after treatment, with confirmed clearance of the parasite. The urine culture also demonstrated > 100 k colony forming units (CFU)/mL Enterobacter cloacae, > 75 k CFU/mL Klebsiella pneumoniae, and 30 k CFU/mL Acinetobacter baumannii. He was treated with ceftriaxone and then ciprofloxacin. The pyelonephritis and enterocutaneous fistula resolved, and he has since had no recurrence or untoward events.

Additional history obtained revealed that the patient lived in Puerto Rico and only traveled to Chicago for his medical care. He lived in a rural region of Puerto Rico on a small farm and often walked barefoot there. Further chart review identified that the patient had peripheral eosinophilia at the time of his initial surgery.

Strongyloides stercoralis is a roundworm responsible for strongyloidiasis in humans.1 It is not only endemic to rural tropical and subtropical regions but can also be found in some temperate areas with poor sanitation.2 In the United States, it is found in warm and moist, rural, and agricultural areas, particularly Puerto Rico, Appalachia, and the Southeastern United States.2–13 Socioeconomically disadvantaged and institutionalized populations are also at higher risk.2–13 Typically present in soil contaminated with human feces, the filariform (infective) larvae penetrate the skin via contact, migrate to the venous system, penetrate the pulmonary alveoli, and then ascend the bronchi where they are coughed up and swallowed. They may also migrate directly to the small intestine via connective tissues.14 In the small intestine, the larvae molt twice and become adult females which produce eggs by parthenogenesis that then become rhabditiform larvae. Progeny immature rhabditiform larvae (L1) are excreted in the stool where they mature into the filariform larvae (L3) in the environment. Most chronic infections tend to be asymptomatic.15–17

Autoinfection can occur when rhabditiform larvae mature into infective forms in the gastrointestinal lumen, penetrate through the colonic mucosa or perianal region, and repopulate the gastrointestinal tract.14–17 This may result in the persistence of infection in persons who have not been in an endemic area for many years. Strongyloides hyperinfection is a syndrome of accelerated autoinfection that can occur in the setting of immunosuppression.14–17 Affected individuals present with fever, cough, hemoptysis, diarrhea, urticaria, and wheezing; pulmonary infiltrates may be visualized on chest X-ray.15 Hyperinfection may be confirmed by the presence of filariform larvae in stool, bronchoalveolar lavage fluid, cerebrospinal fluid, pleural fluid, and other tissues. Meningitis with enteric organisms may occur with larval migration in autoinfection or hyperinfection.14,16,17 Strongyloides larvae are rarely seen in the urine: presence of the larvae in the urine in the absence of an ileal conduit should raise suspicion for hyperinfection.18

The larvae visualized in this patient’s urine were identified morphologically as rhabditiform larvae. The first-stage rhabditiform larvae that normally pass out in the stool measure up to 380 μm long by 20 μm wide, with a muscular esophagus (club-shaped anterior, then a restriction, and a posterior bulb).19 There is a genital primordium packet of cells, which can be seen about two-thirds of the way posterior from the anterior end. Relative to the more mature filariform larvae, the rhabditiform larvae are smaller, more round, and have a large, discernible buccal cavity as noted in Figure 2. The filariform larvae can be distinguished by their longer, finer, more threadlike structure; the presence of a large esophagus with an intestine to esophagus ratio of 1:1; and subtly notched tail. They can measure up to 600 μm long × 16 μm in width. Both forms may be visualized directly on a wet prep and microscopy of body fluid or stool. Eggs are typically deposited in the intestinal mucosa and are more difficult to isolate and visualize on fecal examination, although they may be seen in some cases.14 Relative to hookworm larvae, which can be confused for S. stercoralis, the buccal cavity is shorter; furthermore, Strongyloides has a split tail and a prominent genital primordium, facilitating discernment.

Given that rhabditiform larvae were isolated from this patient in both urine and stool in the presence of an ileal conduit, it is likely that the patient harbored localized infection in his ileum and did not have disseminated disease. The creation of the ileal conduit transplanted the intestinal infection to his urinary tract. His symptoms likely were secondary to bacterial infection and surgical complications. The Strongyloides were likely an “innocent bystander” and discovered incidentally. Less likely, it is possible that the presence of Strongyloides in the urinary tract may have caused local inflammation and even some systemic symptoms. The possibility was raised that Strongyloides infection could have contributed to poor wound healing and the enterocutaneous fistula, but we have no direct evidence to support this. On review of the patient’s laboratory history, it was discovered that the patient did have unexplained peripheral eosinophilia at the time of the original surgery, several months before detection of the Strongyloides infection. We treated the patient conservatively (as if he had disseminated disease) out of an abundance of caution to ensure clearance of the organism. Subsequent ova and parasite testing on fecal and urine samples demonstrated clearance of the organism. The eosinophilia resolved several months later. The presence of eosinophilia could have alerted clinicians to the possibility of underlying parasitic infection and led to an earlier diagnosis with pointed questioning and appropriate testing. Eosinophilia can be present intermittently with acute and chronic infections; it is rarely seen in hyperinfection/disseminated disease.16,20,21

Testing for Strongyloides should be considered in patients with unexplained peripheral eosinophilia, urticarial or serpiginous skin lesions (especially in the buttocks region, known as larva currens),15–17 unexplained pulmonary or gastrointestinal symptoms (known human T-lymphotrophic virus (HTLV-1) infection), and the appropriate exposure history. Testing should also be considered in asymptomatic individuals from areas endemic for strongyloidiasis, who will undergo immunosuppressive therapy, even if their last potential exposure was decades earlier.16,22–24 Screening fecal examinations and stool microscopy are standard of care but are insensitive in most patients.14–17 Serologic ELISA testing improves sensitivity and specificity; however, there can be 5–10% false-negative or indeterminate results and false-positive results in the setting of other helminthic infections (up to 60% in the case of filariasis).15 Asymptomatic patients should have three stool comprehensive ova and parasite examinations in conjunction with one blood sample for serology.15 Esophagogastroduodenoscopy, bronchoscopy, lumbar puncture, or other procedures to obtain samples may be required depending on the patient’s symptoms.16,17 The recommended therapy is ivermectin 200 μg/kg daily for two doses in the case of localized disease,16 although a recent trial suggests that multiple doses did not show higher efficacy than a single dose.25 Albendazole 400 mg daily for 3–7 days is an alternative, but has a lower clearance rate and should be reserved for second-line therapy.16 Preferred therapy for disseminated disease is ivermectin 200 μg/kg daily for 2 weeks until repeated stool examinations are negative.16 Corticosteroids for treatment of ailments like chronic obstructive pulmonary disease or in preparation for transplantation are contraindicated in the setting of known Strongyloides infection until antiparasitic therapy has been initiated.

Treatment efficacy is gauged through a variety of methods. Treatment can rapidly reduce eosinophilia (within 96 days); however, treatment success is not gauged by resolution of eosinophilia.26 Though antibodies may remain positive for months, treatment success is associated with a greater than 40% reduction in antibody titer (less than 0.6x the original titer value) after 6 months.27 In addition, clearance of parasite from stool suggests treatment effectiveness, although the poor sensitivity of stool analysis may falsely imply infection clearance.28 Failure to clear the parasite after two courses of therapy should prompt evaluation for HTLV-1 infection.29

In conclusion, we present a case of S. stercoralis infection which was discovered incidentally by urinalysis performed to evaluate for urinary tract infection after surgical construction of an ileal conduit. We believe this patient had the localized form of disease present in his gastrointestinal tract and that it was transferred with the ileal segment when it was repurposed for urinary diversion.