Long-lasting insecticidal net (LLIN) ownership by household size in highland and lowland sites, western Kenya, 2015. Note: It was impossible by definition for households with only one to two members to qualify as having an insufficient number of nets.

Long-lasting insecticidal net use and ratio of household size to the number of nets owned in (A) the highlands and (B) the lowlands of western Kenya.

Percent of long-lasting insecticidal net (LLIN) users vs. the percent of the household estimated to have access to an LLIN in the (A) highlands and (B) lowlands. Note: The percent with access was calculated using all declared household members as the denominator; the percent using a net was calculated among only those members whose net use on the previous night was known. 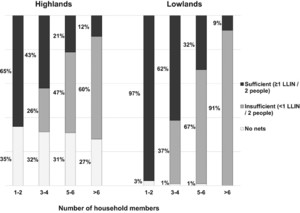 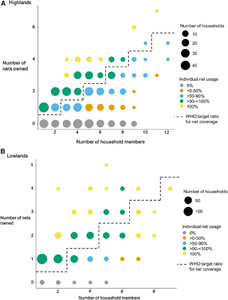 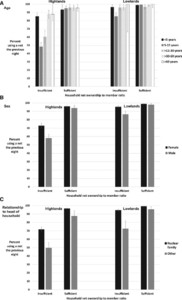 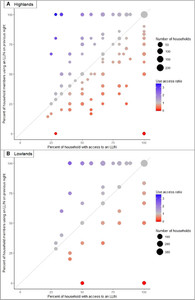 Universal “coverage” with long-lasting insecticidal nets (LLINs) is recommended for malaria control in endemic areas, but ownership does not ensure usage. We evaluated relationships between household-level ownership and individual-level usage in western Kenya in 2015. Low-prevalence highland (> 1,500 m) and highly endemic lowland (< 1,200 m) sites were surveyed from July to August 2015. Household members reported long-lasting insecticidal net ownership, use, and barriers to use. Net ownership was categorized as sufficient (≤ 2 people/net), insufficient (> 2 people/net), or none. Each LLIN was assumed to provide access to two people. We surveyed 574 lowland and 643 highland households, with 1,677 and 2,742 members, respectively. More than 98% of lowland households owned LLIN(s); 72.1% owned a sufficient number. Only 37.5% of highland households had sufficient nets. More people used LLINs than were estimated to have access in the lowlands (94.2% versus 85.3%), but proportions were similar in the highlands (54.3% versus 53.3%). Insufficient ownership was most common for larger households in both areas and strongly predicted LLIN usage. In households with insufficient nets, men, school-age children (aged 5–15 years), and nonnuclear family members were less likely to use LLINs; only relationship to the head of the household significantly predicted use in households with sufficient nets. Long-lasting insecticidal nets were widespread in western Kenya in 2015, but insufficient household ownership remained common in the epidemic highlands and in large households. Access seemed to be the primary driver of individual use. To interrupt transmission, LLIN campaigns should improve distribution to large households and promote use among men, school-age children, and nonnuclear family members.