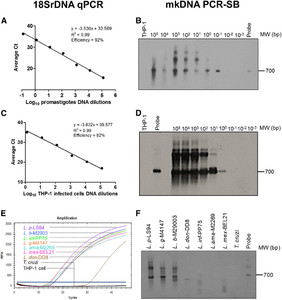 Multiple polymerase chain reaction (PCR)-based approaches have been developed for Leishmania detection in clinical and laboratory samples, and this diversity limits inter-study comparisons, meta-analyses, and generalization of findings. Towards harmonization of a molecular tool for detection of Leishmania (Viannia) for research purposes, we evaluated the concordance of 18SrDNA quantitative polymerase chain reaction (qPCR) and minicircle kinetoplastid DNA (mkDNA) PCR followed by Southern blot (PCR-SB) in in vitro infection systems and in lesion and mucosal swab samples from Colombian patients with cutaneous leishmaniasis caused by L. (Viannia). The lower limit of parasite detection of 18SrDNA qPCR and mkDNA PCR-SB was 10−1 promastigotes and one intracellular amastigote per reaction. From cutaneous lesions (n = 63), an almost perfect concordance was found between the methods (κ = 0.92, 95% CI: 0.82–1.00). Despite equal limits of detection, mkDNA PCR-SB was more efficient for parasite detection in mucosal samples than 18SrDNA qPCR or 18SrDNA digital droplet PCR. The high concordance, sensitivity, scaling potential, and feasibility of implementation of the 18SrDNA qPCR, support its selection as the L. (Viannia) in research laboratories, as a first step towards harmonization of research protocols in the region.