This screenshot from the slit lamp video shows Onchocerca volvulus microfilariae (Mf) in the anterior chamber of the eye. Some Mf overlie the pupil (in the upper left of the image). 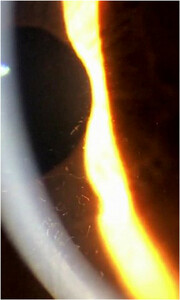 Motile Onchocerca volvulus Microfilariae in the Anterior Chamber of the Eye

A 59-year-old man from an onchocerciasis-endemic area in eastern Ghana was enrolled in a clinical trial to assess the impact of ivermectin on microfilariae (Mf) in the skin and eyes. He had palpable subcutaneous nodules consistent with onchocerciasis and a high Mf burden in skin snips (170/mg of skin). He reported mild generalized pruritus and blurry vision in both eyes. Visual acuity was 20/80 (OD) and 20/60 (OS). Both eyes had moderate cataracts and features consistent with prior anterior uveitis. Intraocular pressures were normal (12 mmHg OU). Atrophic changes in his optic nerves correlated well with visual field defects measured by frequency doubling technology and with retinal nerve fiber layer loss as assessed by optical coherence tomography. Slit lamp examination revealed high numbers of motile Mf in the anterior chambers of both eyes (100-OD and 50-OS) (Figure 1). A cell-phone video (Supplemental Video) illustrates the dramatic appearance of Mf in the anterior chamber by a slit lamp.

Onchocerca volvulus Mf were cleared from the eyes more slowly than from the skin after ivermectin treatment. The patient’s vision did not improve after treatment presumably because of irreversible effects of onchocerciasis.