Woman with transradial amputation. She lost her arm because of a snakebite for which a traditional healer was consulted. A 3D-printed prosthesis was made for her, with an extra belt to prevent slipping. She uses the prothesis for domestic activities, supporting her dominant hand, cooking, and esthetic purposes. (Photos with kind permission of the patient).

Man with shoulder disarticulation. He lost his arm because of a fall accident causing a fracture, after which a traditional healer was consulted. The arm became infected, resulting in necrosis. A 3D-printed prosthesis was made for him, with a belt to attach the prosthesis to his body. He uses the prosthesis for esthetic purposes, especially when he goes to school. (Photos with kind permission of the patient).

3D-printed non-correcting brace for a 7-year-old boy with kyphoscoliosis. (Photos with kind permission of the parents). 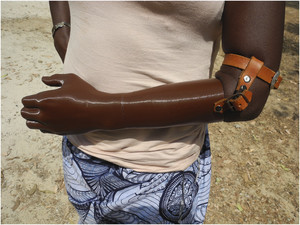 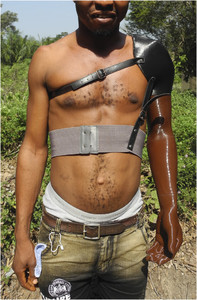 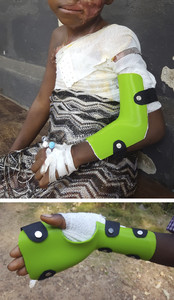 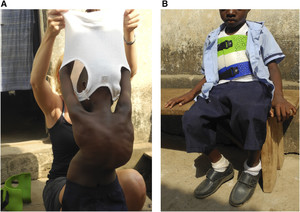 Improving Lives in Three Dimensions: The Feasibility of 3D Printing for Creating Personalized Medical Aids in a Rural Area of Sierra Leone

The aim of this feasibility study was to investigate how a 3D printer could be put to its best use in a resource-limited healthcare setting. We have examined whether a 3D printer can contribute to making prostheses, braces, or splints for patients who underwent major limb amputation because of complex wounds, for example, due to burns and subsequent scarring, accidents, conflicts, or congenital abnormalities. During a 3-month period, we investigated the benefits of customized, 3D-printed arm prostheses, splints, and braces in Sierra Leone. Using a handheld 3D scanner and a 3D printer, patient-specific medical aids were designed, manufactured, and tested. Questionnaires regarding patient satisfaction and the functionality of the prostheses were used for a short-term follow-up. Four esthetic prostheses were designed: two prostheses of the hand, one of the forearm, and one of the entire arm. Follow-ups were conducted after 3 to 4 weeks to investigate the quality of the prostheses and to complete a patient questionnaire. Even though the prostheses primarily fulfill esthetic needs, they also exhibit some degree of functionality. In addition, four splints for hands and arms were made to prevent scar contractures after skin transplantation. Finally, a brace for a young boy with kyphoscoliosis was manufactured. The boy has accepted the brace and will be followed up in the months to come. Long-term follow-up is required to prove the sustainability of the 3D-printed brace and prosthetic arms. Further research into how to sustain and refine this project is underway.