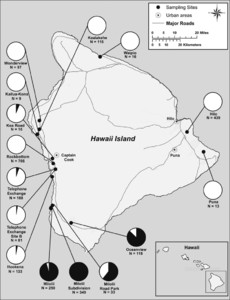 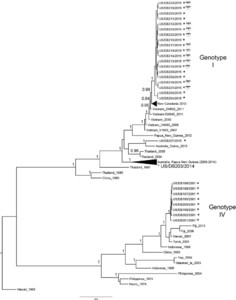 A dengue outbreak occurred on Hawaii Island between September 2015 and March 2016. Entomological investigations were undertaken between December 2015 and February 2016 to determine which Aedes mosquito species were responsible for the outbreak. A total of 3,259 mosquitoes were collected using a combination of CDC autocidal gravid ovitraps, Biogents BG-Sentinel traps, and hand-nets; immature mosquitoes were collected during environmental surveys. The composition of species was Aedes albopictus (58%), Aedes aegypti (25%), Wyeomyia mitchelli (7%), Aedes vexans (5%), Culex quinquefasciatus (4%), and Aedes japonicus (1%). Adult mosquitoes were analyzed by real-time reverse transcription polymerase chain reaction (PCR) for the presence of dengue virus (DENV) RNA. Of the 185 pools of female mosquitoes tested, 15 containing Ae. albopictus were positive for the presence of DENV type 1 RNA. No virus was detected in pools of the remaining species. Phylogenetic analysis showed the virus strain belonged to genotype I and was closely related to strains that were circulating in the Pacific between 2008 and 2014. This is the first report of detection of DENV in Ae. albopictus from Hawaii.