Knowledge of each aspect for China’s “1-3-7” surveillance and response strategy among baseline survey, after classroom-style teaching, and after tabletop exercises. 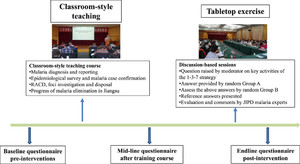 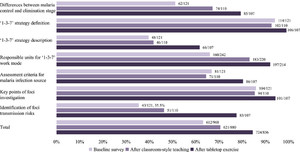 An estimated 3.7 billion people in more than 90 countries and territories are at risk of malaria globally, with an estimated 219 million malaria cases and approximately 435,000 deaths occurring in 2017.1 Historically, malaria has been one of the most important infectious diseases in China. Wide-scale efforts on malaria prevention and control since 1956 have reduced reported malaria cases from 6.97 million to 14,000 across China by 2009.2 Among 24 malaria-endemic provinces in China, only 63 counties (2.89%) had malaria incidence rates of more than 1 case per 10,000 population in 2009.3 Given this progress in malaria control, China launched its National Malaria Elimination Action Plan (NMEAP) in 2010 with the goal of elimination by 2020.4

To support the goal of the NMEAP, China’s “1-3-7” surveillance and response strategy was developed and scaled up to a total 31 provinces in China in early 2012. The “1-3-7” approach defines targets used to guide and monitor malaria case reporting, case investigation, and follow-up response, respectively: reporting of malaria cases within 1 day through China’s web-based health information system by the local healthcare provider; case confirmation and investigation within 3 days by the China county-level CDC where the case is reported, to determine where the case originated (local or imported); and the appropriate public health response within 7 days by the China county-level CDC where the patient resides and/or works to prevent further transmission.5,6 Since national rollout of China’s “1-3-7” strategy, time-bound targets for case reporting, case investigation, and foci response have been achieved in a large and diverse country such as China.7 The “1-3-7” strategy has been incorporated as a surveillance and response strategy within the Greater Mekong Subregion, including Cambodia and Thailand.8

Malaria personnel at the prefecture and county CDC are the frontline implementers of “1-3-7” activities and are involved in malaria case diagnosis and reporting, case confirmation, and epidemiological investigation, in addition to conducting specific control measures for foci disposal in the community. It is important that the CDC malaria personnel have an accurate understanding of how to implement the “1-3-7” strategy to ensure an effective response to malaria cases and quickly reduce any opportunities for secondary transmission arising from imported malaria.

Recent studies have highlighted the knowledge and performance of malaria personnel conducting “1-3-7” strategy activities.7,9 Questionnaires administered to malaria personnel on their knowledge of the standard operating procedures (SOPs) have shown that respondents did not understand the SOPs for reactive case detection (RACD).10 Furthermore, the management of imported malaria cases will remain a major challenge for achieving and sustaining malaria elimination in China.7 The aim of this study was to evaluate and compare the effects of different types of training modules (classroom-style or tabletop exercises) given to county-level CDC malaria personnel in Jiangsu Province on the knowledge of the “1-3-7” surveillance and response strategy.

Jiangsu Province is located in the southeast of China. The province covers an area of 102.6 thousand square kilometers, 1.06% of the total area of China. Situated in a transition belt from a subtropical to temperate zone, Jiangsu Province has a typical monsoon climate. Anopheles sinensis and Anopheles anthropophagus are the main mosquito vectors, and the climate and environment is suitable for the breeding of Anopheles mosquitoes.11 There are a total of 13 prefectural cities and 100 counties in Jiangsu Province.

A total of 125 participants were selected from all 13 prefecture CDCs and 100 county CDCs across Jiangsu Province. One to two government personnel in each county and prefecture CDC are responsible for the daily management of malaria control and other parasites.

All surveys and training modules were carried out in June 2016 at the Jiangsu Institute of Parasitic Diseases (JIPD), an international training center in Wuxi, Jiangsu. CDC malaria personnel took part in the malaria training module (using classroom-style teaching) and tabletop exercises (using discussion-based sessions) with pre- and post-intervention surveys (Figure 1). For the classroom-style teaching course, this module only imparted malaria knowledge to all participants, including China’s “1-3-7” surveillance and response strategy, such as malaria diagnosis and reporting, epidemiological survey and malaria case verification, RACD, foci investigation and disposal, and the progress of malaria elimination in Jiangsu.

Next, tabletop exercises were carried out using questions and answers through “1-3-7” strategy malaria disposal scenarios for all participants. During the tabletop exercises, all participants were randomly assigned to 13 different groups based on different scenarios of malaria diagnosis and reporting, sample collection, case confirmation, RACD, foci investigation, and malaria risk identification. Then, a facilitator presented questions to all participants on the “1-3-7” strategy based on particular scenarios. Randomly selected groups then answered questions and were evaluated by a different randomly selected group. For example, answers were provided by random group A, and then random group B would assess the above answers. After this process, reference answers were presented to all participants, and each group openly discussed through the guides of the facilitator. Finally, JIPD experts evaluated and commented on each group’s answers. Tabletop exercises allow participants to dispose and respond to scenarios by performing their assigned duties in a simulated setting (Figure 1). For both training modules, each key segment of malaria foci disposal in China’s “1-3-7” surveillance and response strategy was covered. After the tabletop exercises, a questionnaire assessed the knowledge of all study participants post-training.

At the beginning of each module, a baseline survey was conducted with all participants. After the classroom-style and tabletop exercise modules, questionnaires were administered to all study participants to determine their knowledge of “1-3-7” activities. Study participants completed their post-training evaluations in the JIPD training center. A database of the questionnaire responses was created in Epidata version 3.1 (the EpiData Association, Odense, Denmark). Data were independently double entered by two JIPD staff members. If discrepancies in data entry were identified, corrections were made by an independent third JIPD staff member by reviewing the questionnaire data.

The datasets included basic characteristics of all participants and were input into Excel (Microsoft Office 2007, Microsoft Corp., Redmond, WA). The study population was stratified and analyzed by the following: gender, CDC level, education, professional title, age-group, and service years. Categorical variables such as knowledge of the “1-3-7” strategy and degree of evaluation acceptability were carried out by chi-square (χ2) tests. The likelihood-ratio correction was used when the expected frequency in any cell was five or less. Knowledge (as a %) equaled the number of correct answers to relevant knowledge questions divided by the total number of answers to relevant knowledge questions multiplied by 100. A high score (greater than or equal to 75%) meant that each respondent gave six correct answers of eight multiple-choice questions in each questionnaire. P-values less than 0.05 were considered statistically significant. All statistical analyses were performed in STATA version 12 (College Station, TX).

All respondent identifiers were removed from the data before extraction from the database. Nonpersonal identifiers were used during analysis and presentation. Informed written consent was obtained from all participants before trainings. The study was approved by the Institutional Review Board of JIPD (IRB00004221), Wuxi, China.

Demographic characteristics of the study participants.

* Questionnaire data partially missed because of respondent not providing a response.

Respondent knowledge of the “1-3-7” strategy.

This study demonstrated that the overall knowledge of the “1-3-7” strategy for basic CDC malaria personnel was relatively low; however, tabletop exercises were an effective intervention for malaria personnel to improve their understanding of the strategy compared with classroom-style training. Previous studies have shown that tabletop exercises on emergency preparedness are an innovative method that can be used to assess and improve public health emergency response capabilities.12,13

The “1-3-7” strategy has played an important role since the beginning of the NMEAP in efficiently detecting, treating, and responding to individual malaria cases, and promptly eliminating the source of infection.14,15 The strategy has been well executed even in the most difficult border areas between Myanmar and China, although a need to further strengthen the “3” indicator in the 18 border counties of Yunnan Province has been noted.16 The “1-3-7” malaria surveillance and response strategy rolled out nationally in early 2012,5 yet weaknesses in the understanding of the strategy and implementation by the basic CDC malaria personnel remain. Concerns have been raised about a lack of understanding of strategic concepts and objectives in the malaria elimination stages.17 Results demonstrated here, and identified previously,7,9 highlight that most study respondents had a low understanding of the “1-3-7” strategy work activities. In this study, through a classroom-style training module, simple questions on the differences between malaria control and elimination stages, and identifying the responsible units for the “1-3-7” activities, improved knowledge of the strategy. However, this study was unable to identify differences between baseline survey and classroom-style training for other key strategy components, such as the assessment criteria for malaria case origination, foci investigation, and identification of foci transmission risks. Although basic knowledge of the strategy could be improved through the classroom-style training module, overall knowledge improvement was low. Tabletop exercises improved the knowledge of each aspect on China’s “1-3-7” surveillance and response strategy.

A continued challenge for malaria elimination in China remains imported malaria.18 In 2016 and 2107, there were 3,321 and 2,816 imported malaria cases in China,19,20 posing a threat to achieving and sustaining malaria elimination in China. Many malaria-receptive areas remain in China, especially during the warm summer months. Continued importation of malaria across its southern border with Myanmar, and from Chinese workers returning from overseas,21 is a threat to maintaining the interruption of indigenous malaria transmission in China. It is important that CDC malaria personnel can recognize and appropriately respond to imported malaria to prevent malaria from reestablishing. Tabletop exercises can be used to train local CDC malaria personnel throughout the year in high-risk areas and during potential malaria-related outbreak emergencies in China.

Study results also identified that the respondents who were 31- to 50-year-old men, worked at the county CDC level, were educated, and had 11–20 years of work service more easily acquired an improved understanding of the “1-3-7” strategy after the tabletop exercises. The respondents with these characteristics had a lower understanding than other groups after the classroom-style training module; however, the total proportion of these respondents with a high score was much greater than that in the baseline survey.

Both the classroom-style training module and tabletop exercises improved understanding of the “1-3-7” malaria surveillance and response strategy. Results increased significantly after tabletop exercises compared with the classroom-style module; 91.6% and 94.4% of basic CDC malaria personnel provided positive feedback for the content and forms on tabletop exercises, and concluded it was relevant with their work on the “1-3-7” strategy. For post-elimination, basic CDC malaria personnel will need to be equipped with the knowledge of how to implement the “1-3-7” strategy. The use of tabletop exercises at regular training intervals may play a role in maintaining the necessary skills in malaria surveillance and response in Jiangsu Province and China where potential malaria foci exist.

This study has limitations in that CDC malaria personnel of Jiangsu Province participated and may not represent the same knowledge of malaria personnel in other provinces in China. Tabletop exercises are a novel training tool for local CDC malaria personnel, yet it is possible that the questions may have been misunderstood. Although the tabletop exercises demonstrated greater knowledge gain after completion, and therefore potentially a better learning strategy, study authors did not randomize the groups to either classroom-style training module or the tabletop exercises. Therefore, it is impossible from this study to know the true effect of one training style alone.