Reported source of information among seasonal and migrant workers with any exposure to health education messages on kala azar disease and sand fly bites in the lowland agricultural farms of the Amhara region.

Responses of seasonal or migrant workers in lowland agricultural farms in Abdurafi and Metema areas of northwest Ethiopia to questions on their knowledge of possible sand fly bite prevention measures, 2017.

Percentages of 403 seasonal/migrant agricultural workers in Abdurafi–Metema farms (northwest Ethiopia) who responded that they are willing to pay for different sand fly protective measures (June–October 2017). 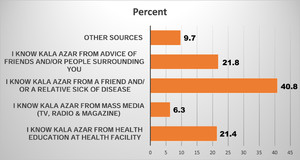 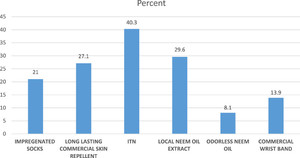 Kala azar occurs among seasonal and migrant agricultural workers in northwest Ethiopia and accounts for almost 60% of the disease burden in the country. We conducted a quantitative study on the level of knowledge and practice of this vulnerable group in relation to kala azar transmission and acceptability of its vector control tools. A total of 403 workers were randomly selected from eight farms using a purposive sampling technique. Knowledge and practice scores were calculated based on 12 and 9 core questions, respectively. Binary logistic regression was used to identify factors associated with knowledge and practice. A large gap in knowledge of the disease and the vector was evident with 61.8%, 24.6%, and 13.6% of the workers having poor, moderate, and good levels of knowledge scores, respectively. Similarly, 95% of the seasonal workers reported poor level of use of protective measures against the bite of the sand fly vector. Good level of knowledge about kala azar and its sand fly vector was statistically associated with formal education (adjusted odds ratio [AOR] = 2.11; 95% CI = 1.17, 3.80; P < 0.05) and previous exposure to health education (AOR = 4.72; 95% CI = 1.99, 11.16; P < 0.001). Despite poor current knowledge and practice, a large proportion of the study participants showed interest in using vector control tools if made available, with 78% of the seasonal and migrant workers expressing some willingness to pay for different measures that can protect against sand fly bites. Therefore, we strongly recommend that comprehensive health education and vector control programs should be provided to these workers.