Total number of inpatients recorded with Salmonella enterica serovar Typhi blood stream infection per month for all years and total number of patients per month, excluding the outbreak year of 2002.

Total number of inpatients recorded with Salmonella enterica serovar Typhi bloodstream infection per 100,000 people per province from 2000 to 2018.

Percentage of Salmonella enterica serovar Typhi (S. Typhi) isolates that are ciprofloxacin and nalidixic acid intermediate or resistant per year. 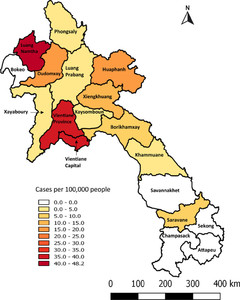 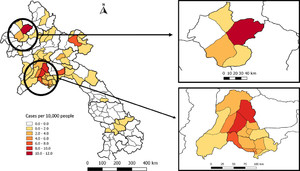 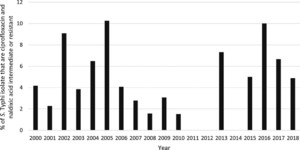 Typhoid in Laos: An 18-Year Perspective

Although typhoid is endemic to Southeast Asia, very little is known about the disease in Laos. Typhoid vaccination is not included in the national immunization program. Although sanitation has improved, one million people still do not have access to basic clean water sources. We describe the epidemiology and antimicrobial susceptibility patterns of Salmonella enterica serovar Typhi (S. Typhi) infection in Laos based on isolates accrued over 18 years at Mahosot Hospital, Vientiane. All blood cultures collected from patients presenting with fever submitted to the Microbiology Laboratory at Mahosot Hospital (February 2000–December 2018) were included. This included patients from Vientiane and four provincial hospitals and one typhoid outbreak investigation. A total of 913 (1.5%) of 60,384 blood cultures were positive for S. Typhi. The majority of isolates with data available (712/898, 79.3%) were susceptible to all antibiotics tested, with 59 (6.5%) multidrug-resistant (MDR) isolates, mostly from one outbreak. Of 854 isolates, 12 (1.4%) were fluoroquinolone resistant. Patient admissions peaked between March and June at the end of the dry season. Although there are key limitations, these data give the first detailed epidemiological evidence of typhoid in Laos. However, estimates will be greatly influenced by access to blood culture services and health-seeking behavior. Although typhoid multidrug resistance and fluoroquinolone resistance are not currently major issues in Laos, continued surveillance and improved antibiotic stewardship are necessary to forestall worsening of the situation. Cost-effectiveness analysis is needed to inform decisions regarding typhoid vaccine introduction.