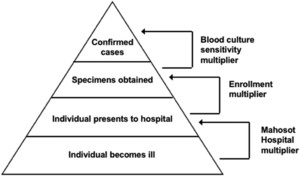 Typhoid conjugate vaccines represent a new tool for typhoid control. However, incidence data are needed to inform decisions about introduction. We sought to estimate typhoid and paratyphoid fever incidence in Vientiane, the capital and largest city of the Lao People’s Democratic Republic (Lao PDR). We did a representative cluster survey of health-seeking behavior for fever in Vientiane from January 15, 2019 through January 26, 2019. Multipliers derived from the survey were applied to data from Salmonella Typhi and Salmonella Paratyphi A bloodstream infection surveillance from Mahosot Hospital, Vientiane, for the period of January 1, 2015 through December 31, 2017, to estimate enteric fever incidence. A total of 336 households representing 1,740 persons were enrolled in the healthcare utilization survey, and multipliers were derived based on responses to questions about healthcare seeking in the event of febrile illness. Of 7,997 Vientiane residents receiving blood cultures over the 2-year surveillance period at Mahosot Hospital, we identified 16 (0.2%) with Salmonella Typhi and six (< 0.1%) with Salmonella Paratyphi A bloodstream infection. After applying multipliers, we estimated that the annual incidence of typhoid was 4.7 per 100,000 persons and paratyphoid was 0.5 per 100,000 persons. During the study period, the incidence of typhoid and paratyphoid fever was low in Vientiane. Ongoing surveillance is warranted to identify increases in future years. Similar studies elsewhere in the Lao PDR would be useful to understand the wider enteric fever situation in the country.