Presence of ocular and nasal discharge at five time points for children whose faces were washed with water or water and soap, among those with ocular (Graph A) or nasal (Graph B) discharge present on faces before washing. 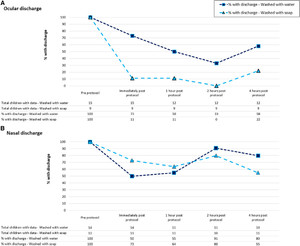 Eye-to-eye transmission of Chlamydia trachomatis, the causative agent of trachoma, may be plausibly interrupted if faces are kept free of ocular and nasal discharge. Between April and June 2018, 83 children aged 1–9 years with active trachoma were recruited from 62 households and allocated to a face cleaning protocol: face washing with water, face washing with water and soap, or face wiping. Faces were examined for the presence of ocular and nasal discharge, and swabs were taken from faces and hands to test for C. trachomatis at baseline, immediately post protocol, and after 1, 2, and 4 hours (washing protocols). Washing with soap was more effective at removing ocular discharge than either washing with water (89% and 27% of discharge removed, respectively, P = 0.003) or wiping with a hand (42%, P = 0.013). The reduction in prevalence of ocular discharge was sustained for at least four hours. The prevalence of C. trachomatis on face swabs was reduced by all washing protocols. The importance of soap should not be overlooked during facial cleanliness promotion.