Multiple symmetrically distributed hypopigmented, hypoasthetic patches over the trunk, upper extremities, and nape of the neck. 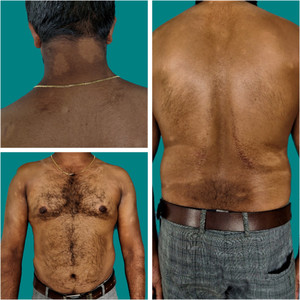 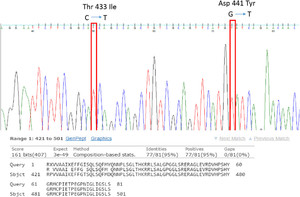 The ongoing transmission of leprosy in India is worrisome, and emerging drug resistance may be one of the factors responsible for the continued transmission of leprosy in India. Emerging cases of multidrug-resistant Mycobacterium leprae pose a great threat to eradication of leprosy and must be addressed with utmost priority. We report a case of multidrug-resistant M. leprae in a case of relapse where slit skin smear (SSS) was negative and histopathology was inconclusive. Drug resistance studies in leprosy are undertaken only in smear-positive relapse cases, and detection of this type of multidrug resistance in a case with negative SSS and innocuous histopathology is rather unusual and highlights the importance of undertaking drug resistance tests even in smear-negative cases of leprosy relapse. Resistance to ofloxacin (OFL) is also a cause for concern as OFL is one of the reserve drugs recommended for treatment of rifampicin-resistant strains.