Rapid positive test for canine visceral leishmaniasis DPP (Bio-Manguinhos). The presence of two red lines is observed in the test (T) and the control (C). 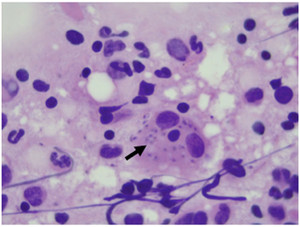 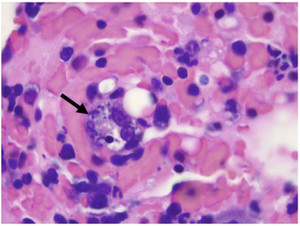 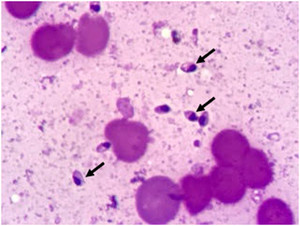 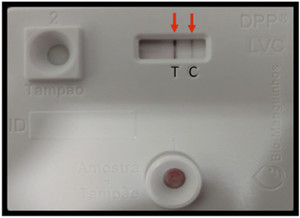 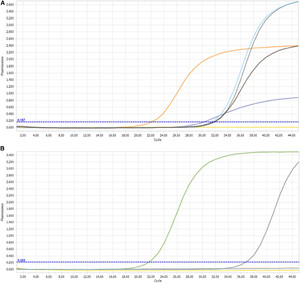 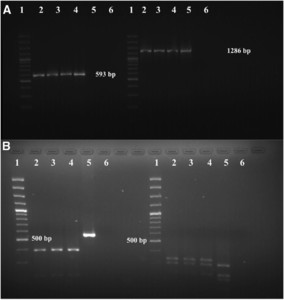 First Report of an Urban Case of Canine Visceral Leishmaniasis in the Municipality of Cali, Colombia

American visceral leishmaniasis (VL) is a vector-borne disease caused by Leishmania infantum (syn. chagasi) and transmitted by Lutzomyia longipalpis and Lutzomyia evansi phlebotomine sand flies. Dogs not only are the main host reservoirs of the parasite but also suffer the disease; therefore, canine VL (CVL) has assumed an important role in public health. In Colombia, human and CVL are restricted to two transmission foci: one in the north region (Caribbean coast) and other in the central south region (middle Magdalena River Valley). We present a CVL case involving a 2-year-old male dog with a history of lack of appetite, general weakness, and progressive loss of weight. A diagnosis of CVL was obtained using the direct parasitological examination in spleen and bone marrow samples stained with Giemsa and RT-qPCR. The infecting Leishmania species was identified as L. infantum by PCR–restriction fragment length polymorphism amplifying the Hsp70 gene from bone marrow and spleen samples and confirming by sequencing. The patient responded favorably to treatment with intramuscular meglumine antimoniate at a dose of 100 mg/kg daily for 8 weeks and oral allopurinol at a dose of 10 mg/kg every 12 hours until new indication. This is the first report of urban CVL in the city of Cali, Colombia, highlighting the need for surveillance and control programs in the municipalities of the department of Valle del Cauca, a region where VL has not been informed before. The findings also indicate the need to reinforce the surveillance programs in other rural and urban regions of the country where favorable eco-epidemiological conditions exist.

Visceral leishmaniasis (VL) is an infectious disease that is widely distributed in tropical and subtropical countries, with 500,000 to 700,000 new cases occurring each year worldwide.1 In Latin America, the Mediterranean basin, and western Africa, the causative agent is Leishmania infantum (syn Leishmania chagasi). In America, the main vectors are Lutzomyia longipalpis and Lutzomyia evansi sand flies.1 Dogs are the main reservoir hosts; therefore, these mammals play an important role as a source of infection for the vectors and are, thus, responsible for the maintenance of the urban and rural transmission cycles of VL affecting dogs as well as humans.2–5

In Colombia, there are two major foci of VL transmission: the Caribbean coast (departments of Córdoba, Sucre, and Bolívar), where the highest number of events is registered, and the middle Magdalena River Valley (Departments of Santander, Cundinamarca, Tolima and Huila).6 In both foci, Lu. longipalpis and Lu. evansi are present and are responsible for disease transmission.7–11 In these foci, VL occurs mainly in rural and urban areas where dogs with poor health conditions are abundant.12 Although both human and canine VL (CVL) coincide in space and time in these foci, the incidence of CVL remains completely unknown.

Canine VL is characterized by fever, weight loss, hepatosplenomegaly, polyadenopathies, and pancytopenia along with ocular and dermatological alterations, chronic nephritis, colitis, and epistaxis.13 Death can occur in the absence of treatment.13

This work describes the first case of CVL in the city of Cali (Colombia), located in the Valle del Cauca department, southwestern Colombia, at an altitude of 1,018 meters above sea level (3°27′24.678″N 76°31′20.776″W), where no VL has been described before. The canine patient was a pet without other preexisting diseases and without a history of visiting endemic areas for leishmaniasis. The dog had traveled to rural areas in Buenaventura and Palmira municipalities, near Cali, 2 months previously. However, neither Cali, nor Palmira and Buenaventura, have informed cases of VL or the presence of Lu. longipalpis or Lu. evansi vectors.

A 2-year-old male, 11 kg weight, French bulldog was hospitalized in a private veterinary center in the city of Cali, Colombia, on July 16, 2018, with a 2-month history of lack of appetite, general weakness, and progressive loss of weight. Physical examination revealed that the corporal condition score was 3/5, a temperature of 38.2°C, and physiological constants (heart rate, respiratory rate, or pulse) were in the normal ranges. Blood laboratory assessments showed normocytic normochromic anemia, thrombocytopenia, and lymphopenia. A slightly increased creatinine and significantly increase alanine aminotransferase (ALT) levels were also observed. There was no serological evidence of infection by Dirofilaria immitis, Ehrlichia canis, Borrelia burgdorferi, and Anaplasma phagocytophilum/platis in a commercial kit SNAP 4DX Test (Idexx Laboratories, Madrid, Spain). Nevertheless, the patient was treated with doxycycline (10 mg/kg/day) and a single intramuscular injection of imidocarb dipropionate (5 mg/kg) that is the treatment indicated for hemoparasites, such as Ehrlichia and Babesia infection. Vitamin supplement over 4 weeks was also administered.

Blood laboratory assessments were performed every week over 4 weeks. Progressive anemia and leukopenia with renal failure and an inflammatory process in liver were observed (Table 1). A progressive decrease in red and white blood cells was noticed, indicating anemia and immunosuppression. Creatinine and ALT values were above the normal range. Progressive weight loss continued until the end of treatment with doxycycline (week 4).

Laboratory data during treatment with doxycycline

As the patient showed no response to doxycycline treatment and because of progressive deterioration, the dog returned to the clinic a month later. On suspicion of neoplasia, a bone marrow aspirate was performed. The myelogram showed abundant intracellular amastigotes of Leishmania sp. with myeloid hyperplasia and erythroid hypoplasia, megakaryocytic hypoplasia, and plasma cell hyperplasia (Figure 1). The diagnosis of CVL was confirmed after observation of intracellular amastigotes in Giemsa-stained bone marrow and spleen smears (Figure 2). A reference immunochromatographic rapid test based on the rK39 antigen (DPP®, Bio-Manguinhos, Rio de Janeiro, Brazil) also yielded positive findings (Figure 3). After diagnosis of CVL, the dog remained confined without contact with people or other pets.

The detection and quantification of Leishmania spp. in blood samples was performed by qPCR using QuantiTect SYBR Green PCR kits (Quaigen, Hilden, Germany).14 A 120-bp fragment of the DNA polymerase I gene from Leishmania was amplified. Absolute quantification was performed using a standard logarithmic scale from 1 to 1 million parasites. The parasitic load in blood was 11 parasites/μL (Figure 4).

Leishmania infantum was identified using two Hsp70-based PCR protocols (PCR-N and PCR-F) (Figure 5A) and their corresponding restriction fragment length polymorphisms in DNA obtained from promastigotes isolated from the bone marrow and spleen samples cultured in NNN medium15 (Figure 5B). Moreover, the HSP70N and HSP70F PCR products were sequenced (Macrogen), and the results showed a 100% identity with the sequence of the Hsp70 gene of L. infantum JPCM5 (Figure 6).

Once the diagnosis of VL was established, the patient was treated with intramuscular meglumine antimoniate (Glucantime®) at a dose of 100 mg/kg daily for 8 weeks and oral allopurinol at a dose of 10 mg/kg every 12 hours until new indication. Support therapy with intravenous renal balance and oral ursodeoxycholic acid (10 mg/kg/day) for 8 weeks was also administered.

The dog showed clinical improvement after the first week of treatment and normal serum levels of creatinine and ALT 4 and 8 weeks after starting the treatment. The patient also showed an increase in the blood cell count, which reached the normal values (except platelets) and a progressive weight gain (Tables 1 and 2).

At PTD60 (week 8), qPCR of DNA in peripheral blood sample yielded negative findings (Figure 4B). No samples from the spleen or bone marrow were obtained because of the invasiveness of the procedure and the refusal of the owners. Abdomen ultrasonography showed hepatomegaly and splenomegaly without obvious alterations in other organs.

Because the notification of a case of CVL in a nonendemic area, we inquired about the places where the animal was the months before the diagnosis. The owner referred to two places in the rural area of Valle del Cauca. The first, a horse breeding farm located in Rozo, municipality of Palmira (3°37′29″N, 76°24′32″W), and the second, the Hostel Pacifico in Juanchaco, municipality of Buenaventura (3°56′01″N, 77°20′53″W). In these two places, an entomological survey was conducted using CDC-type light traps, for two consecutive nights from 6:00 pm to 6:00 am the next day. In addition, 14 canines were sampled to diagnose LV using the rK39 test. A few specimens of Lutzomyia gomezi, an incriminated vector of CL were captured in Palmira, whereas Psychodopygus panamensis, Nyssomyia trapidoi, and Bichromomyia olmeca bicolor, which are potential vectors in the transmission of LC in Colombia. None of the dogs were positive in the rK39 test.

The occurrence of LV in an area depends on the presence of the parasite, the vector, and susceptible hosts. Estimation of the actual prevalence of canine LV in Latin America is difficult because it is usually a subclinical infection, and there are limitations to the diagnosis as a result of coinfections with species that cause the cutaneous form and, therefore, generate cross-reactions in the serological tests, among others.16

In the present work, CVL was diagnosed in a dog that has never lived in an endemic area. The dog had only traveled to two nearby semirural areas where human or CVL has not been informed. The presence of Lu. longipalpis or Lu. evansi has also not been documented in the Valle del Cauca.

It is known that VL is spreading in South America because of the massive migration of human and canine populations, the transition of vectors from rural areas to urban areas, the dissemination and adaptation of natural reservoirs, deforestation, climate change, and poor public health policies for the surveillance and control of this disease.16

Because, none of these factors happen in Cali, this report should be considered as an index case that deserve a complete eco-epidemiological study, including searching of both canine and human VL but also asymptomatic infections and identifying of presence of vector species in urban areas, both in Cali and other municipalities of Valle del Cauca, Colombia. Moreover, because a new focus of LV is identified, it would necessitate a contingency plan to eradicate the disease, given its lethality in the absence of timely treatment and considering that there are no particularly effective treatments for the reservoirs. Although dog may show clinical improvement, they may continue to be infectious for the vectors, which is why the WHO recommends that the animal be euthanatized or moved to areas where there are no vectors.

From the clinical point of view for veterinarians, CVL constitute a diagnostic challenge, and therefore, training and continuing education activities are required to keep in mind this disease, mainly in not endemic places where the disease may be confused with other more common pathologies such as leukemia or hemoparasite infections (Babesia, Ehrlichia, and E. canis).

Although these diseases can be diagnosed by laboratory tests routinely used in veterinary medicine, diagnosis of VL needs more specific tests such as the DPP rapid test or PCR test. In addition, is also necessary that veterinarians are trained in bone marrow and popliteal lymph nodes aspirations to increase the possibility to detect the presence of Leishmania parasite. In this work, the usefulness of these diagnostic methods was validated, which allowed the establishment of an adequate treatment regimen.

This is the first report of urban CVL in the city of Cali, Colombia, highlighting the need to initiate active search of human and CVL and assessing the presence of sand fly vector in the municipalities of the department of Valle del Cauca, a region where both human and CVL have not been documented before. The findings reinforce the establishment of surveillance and control programs in other rural and urban regions of Colombia where favorable eco-epidemiological conditions exist.