Flow diagram for the case/control recruitment. 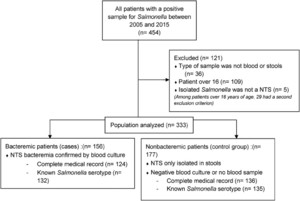 Nontyphoidal Salmonella infections can result in bacteremia. This study was undertaken to determine the predictive factors for bacteremia in children aged less than 16 years. Medical data were collected for every child with positive nontyphoidal Salmonella cultures in blood or stools at the University hospital of Martinique, French West Indies, between January 2005 and December 2015. Among 454 patients, 333 were included; 156 cases had confirmed bacteremia, and 177 were included as control group with nontyphoidal Salmonella only isolated in stools. Age at diagnosis, delay before consulting, prematurity, immunosuppression, or hyperthermic seizures were not significantly associated with bacteremia. C-reactive protein was higher in cases of bacteremia (P = 0.01); however, after adjusting to the threshold of 30 mg/L, there was no longer any difference. There were also significant relations for electrolytes such as hyponatremia (odds ratio (OR) = 2.08 [95% CI = 1.31–3.95]; P < 0.01), high urea level (OR = 0.53 [95% CI = 0.32–0.88], P < 0.01). The infecting serotype was the most discriminant risk factor (P < 10−4). Among 28 serotypes isolated between 2005 and 2015, Salmonella panama was the most common serotype: 122 strains (78.2%) were isolated from bacteremic patients versus 60 (33.9%) from nonbacteremic patients (P < 10−4). Salmonella panama was the most important risk factor for bacteremia (OR = 7.37 [95% CI = 3.18–17.1], P < 10−4) even after multivariate analysis (OR = 13.09 [95% CI = 5.42–31.59], P < 10−4). After adjusting for bacteremia, S. panama was associated with a significantly higher body temperature than other Salmonella: 39°C (standard deviation [SD] = 0.92) versus 38.2°C [SD = 1.1], linear regression P < 10−3. Children with Salmonella serotype panama infection were at higher risk of bacteremia than children infected with other Salmonella serotypes.

In 2010, minor Salmonella also known as Salmonella nontyphi (NTS) were considered responsible for about 3.4 million infections worldwide and 681,000 deaths1; the majority (57%) occurred in Africa.2 In western countries, most of the time these infections are mild.3 The most frequent presentation is acute diarrhea, often associated with high fever. Most of the time, patients do not need specific treatment to get cured. However, in 6% of the cases, NTS infections are disseminated with severe clinical presentations4,5 (bacteremia, meningitis, or bone infections).6,7 In otherwise healthy individuals, systematic antibiotic therapy is not yet recommended against mild-to-moderate forms, but should be administered if the infection spreads beyond the intestine.8 There is currently no consensus on the indications for antibiotic treatment.

The aim of this study was to define the clinical and biological characteristics of children presenting at the University Hospital of Martinique, French West Indies, with NTS bacteremia, and to compare them with those of children with nonbacteremic NTS gastroenteritis.

Children evaluated in the University Hospital, Fort-de-France from January 1, 2005 through December 31, 2015, with documented NTS infection (positive blood culture or positive stool culture) were identified from logs maintained by the microbiology laboratory. All medical records were reviewed. The initial visit was defined as the day when the first positive blood culture was taken. Clinical data obtained from the initial visit (or the day the sample was drawn if the patient was already hospitalized) included the patient’s age and sex, presence of any immunodeficiency or chronic illness, vital signs, presence of blood in the stools, laboratory results, antibiotic therapy, and length of hospital stay.

We used aero-anaerobic blood culture bottles and grew cultures with BACTEC 9050 incubator for a maximum of 7 days. Bacteria were identified by a combination of morphological and biochemical tests. Salmonella strains were identified using a biochemical identification panel from Microscan (Beckman Coulter) which is the standard laboratory method used at the hospital laboratory. Every bacterial strain isolated in the laboratory of microbiology were stocked and sent to the National Reference Center for Escherichia coli, Shigella, and Salmonella (Pasteur Institute, Paris) to identify the corresponding serotype.

For the C-reactive protein (CRP), a value of 30 mg/L was chosen according to the medical literature.10 It has been shown as the threshold value with the best positive predictive value for bacteremia in children in a context of acute gastroenteritis.

Other biological data categories used laboratory standards based on the patients’ age.

Statistical analyses were conducted with the Statistical Stata (STATA© Version 12 for Windows). The two groups were compared starting with a bivariate analysis, followed by a multivariate analysis. Chi-squared and student tests were used to compare qualitative and quantitative variables between groups. Medians and interquartile ranges (25th to 75th percentile) were used to describe non-Gaussian data. Odds ratio (OR) was calculated with 95% confidence intervals. For qualitative variables, Dummy variables were created. The reference group corresponded to the Dummy variable not included in the logistic model. For multivariate analysis, the model included significant variables in the bivariate analysis. Statistical significance was based on an alpha risk equal to 5%.

The anonymized monocentric data issued from medical records was analyzed which is authorized according to the regulatory authorities (Commission Nationale Informatique et Liberte’s number 1906276v0, November 23, 2016).

Among the 454 patients with a positive sample for NTS between 2005 and 2015, 109 were older than 16 years of age at the time of diagnosis; 36 patients had another type of sample than blood or stool samples (such as cerebrospinal fluid or urine sample), and five serotypes appeared to be Salmonella typhi after identification. Among patients older than 16 years of age, 29 had a second exclusion criterion.

The two populations were comparable in terms of gender and age (Table 1), and there was no difference regarding history of prematurity.

Characteristics of the population with a positive culture for nontyphi Salmonella

There was no significant difference regarding associated comorbidities, including immunosuppression (P = 0.944).

For the clinical variables, only body temperature on admission was significantly associated with bacteremia: 39.1°C (standard deviation [SD] = 0.85) for bacteremic patients versus 38.2 [SD = 1.06] for control patients (P < 0.001). There was no significant difference for consultation delay, heart rate on admission or for the presence of bloody-mucoid stools. However, for 73 patients (32 in bacteremic patients and 41 in nonbacteremic patients, clinical examinations were not included in the medical record and we only had access to constants taken at the emergency unit). The results were not different when the subgroup of individuals lacking clinical exams was included within the analysis.

Table 2 shows the comparisons regarding biological variables. The biological values on admission showed that natremia under the normal value were associated with risk of bacteremia: OR = 2.08 [1.31–3.95] (P = 0.005). In patients without bacteremia, serum urea was significantly higher than in patients with bacteremia. There was a difference for CRP level, potassium level, and hematocrit between groups in absolute value, but this association was no longer found after adjustment on age at diagnosis according to laboratory references.

Biological data for bacteremic and nonbacteremic patients between 2005 and 2015

Best value for true bacteremia in children in a context of acute gastroenteritis according to Shaoul et al.10

Normal values adjusted on age on diagnosis according to laboratory references.

Among all the patients (bacteremic and nonbacteremic), those with S. panama had a higher temperature than other Salmonella: 39°C [SD = 0.92] for S. panama-infected patients versus 38.2°C [SD = 1.10] for patients with other serotypes, (P < 10−4). This remained significant despite adjusting for the confounding effect of bacteremia (linear regression P < 10−3). There was no other significant difference for other variables.

As shown in other studies, it is difficult to use clinical data as a predictive factor for blood dissemination in the case of NTS infections.11–15 Indeed, even if the fever at the time of admission seems to be a reliable risk factor, it was not specific of bacteremiea. For biological variables, notably the dehydration-related variables, such as sodium, potassium, and hematocrit, it has been shown elsewhere7 that patients susceptible to have a bacteremic evolution often show less important dehydration signs than patients with infections circumscribed within the intestinal sphere. Patients without bacteremia had significantly higher urea level than patients with bacteremia. We have not found similar results in the medical literature, and we could not explain this with the collected data.

Although other studies12,16–18 show that NTS bacteremia occurs more often in younger patients, especially before the age of 36 months, there was no significant difference in our population. Similarly, the length between the first symptoms and the positive sample was not a discriminant factor. These differences with other studies on clinical presentation could be explained by the important age range of our patients (from birth to 16-year old) and the physiological variations associated with the population. Another explanation could be the relatively easy access to health care in the area of Fort-de-France, which could explain short delays before medical consultation.

Among the possible biases was the retrospective nature of this study with missing data and incomplete patient charts. The patients were selected in a public university hospital when a biological sample seemed to be needed. This situation may have led to an overestimation of the severity of cases, which could explain the important proportion of patients with bacteremia in our study. Indeed, only 40% of the referenced strain of Salmonella at the National Reference Center of E. coli, Shigella and Salmonella are sent by public hospital laboratories.19

The study of serotypes in contrast serves to emphasize the high pathogenicity of the panama serovar. Although many studies worldwide involve the virshow serotype, typhimurium or recently heidelberg,11,12,18,20 S. panama remains poorly studied in the medical literature. Salmonella panama was strongly associated with bacteremia in Martinique even after multivariate analysis. The same conclusion was reported in Taiwan in 200221 and 200722 but only on a small number of patients. Our study confirmed this trend. Such a high frequency of S. panama in Martinique is very unusual as this serotype ranks tenth in order of frequency in 2014 in France.19 Among the serotypes associated with higher risk for bacteremia, most are not yet included in the french panel for systematic veterinary and environmental screening. This result suggests that this panel is not optimized yet for tropical areas. There are reports of S. panama being responsible for severe infections,6,23,24 but the pathophysiology of clinical virulence remains under investigation. Salmonella panama belongs to the group D Salmonella species with S. typhi, but also S. enteritidis or Salmonella Dublin. Regardless of the bacteremic status, S. panama was associated with higher body temperature but without tachycardia as seen with S. typhi infections. Salmonella panama is presumably more virulent than other NTS.

In our study, three children were admitted in intensive care for septic shock. We cannot interpret this result as a reflection of serotype virulence in the absence of data on antibiotic therapy in these three children. Currently, there is no consensus about the systematic antibiotic therapy in salmonellosis, including with positive blood cultures. The exhaustive list of treatments and their durations were not clearly listed in patients’ medical records, so we were not able to analyze the antibiotic data among the period studied. However, because of the risk of developing resistance, it seems interesting to study the modalities of antibiotic treatment of salmonellosis In Martinique. When collecting data from the study, the antibiotic treatment modalities were often incomplete, and a new data collection is being studied to explore them.

Salmonella panama is currently not part of the Salmonella considered as having a high infectivity risk for humans in the French legislation25; our study suggested that it would be advantageous to integrate S. panama in Martinique in a specific panel for veterinary and environmental screening. Early identification of the infecting serotype in the stools as S. panama could also be an indication for an early empirical antibiotic therapy before spreading in the bloodstream.

Our initial hypothesis was that specific risk factors are responsible for bacteremic salmonellosis in Martinique and thus that guidelines may need to be adapted. The results of this retrospective analysis confirm this hypothesis. Indeed, S. panama, currently a poorly studied serotype, appears to be specific to the Caribbean region and appears as a major risk factor for bacteremia in children.