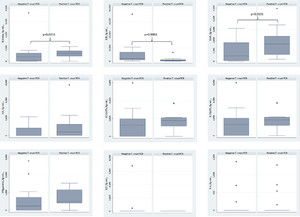 It is known that the immunoregulatory networks in human Chagas disease play a key role in parasitemia control during the acute phase. However, little is known regarding the control of parasitemia during the chronic phase. The aim of the study was to describe the serum cytokine profile of Trypanosoma cruzi chronically infected patients and to evaluate its relationship with the presence or absence of parasitemia in peripheral blood. This is a prospective observational study where adult Chagas disease patients were included. Patients previously treated for Chagas disease, pregnant women, and immunosuppressed patients were excluded. Demographic and clinical information was collected, and T. cruzi real-time polymerase chain reaction (RT-PCR) and serum cytokine profile were determined in peripheral blood. Forty-five patients were included. Trypanosoma cruzi RT-PCR in peripheral blood resulted positive in 19 (42.2%) patients. No differences in the serum cytokine profile were found depending on cardiac or digestive involvement. However, patients with positive T. cruzi RT-PCR had a higher median concentration of IL-10 and IL-1beta and a lower median concentration of IL-8 than those with negative T. cruzi PCR. These results reinforce the key role that this anti-inflammatory cytokine (IL-10) plays in parasitemia control.

Chagas disease, the parasitic disease caused by the hemoflagellated protozoan Trypanosoma cruzi, affects 6–7 million people worldwide.1 During the last decades, the disease has spread from endemic areas in Latin America to other non-endemic regions such as the United States, Europe, Australia, and Japan.2,3 Although the main route of transmission is through blood-sucking triatomine insects (vectorial route), other routes of transmission include congenital, oral, transfusions, and organ transplantation.4

After the acute phase of the infection, which is asymptomatic in most of the cases and lasts in 4–8 weeks, a subsequent asymptomatic indeterminate form takes place during years. After 10–30 years, up to 30–40% of patients will develop the symptomatic chronic phase, with cardiac and/or digestive involvement.4 During the acute phase or in reactivations due to immunosuppression, patients have high parasitemia and diagnosis relies either on direct parasitological methods, such as the microhematocrit and the Strout method, or on molecular biology techniques such as the polymerase chain reaction (PCR). In the indeterminate/chronic phase, the parasitemia is low and intermittent, and the diagnosis is based on serological tests; however, PCR-based high-sensitive techniques can detect the parasite in peripheral blood and are presently used to monitor early detection of treatment failure.5

The different clinical evolution of Chagas disease patients depends on multiple factors, including both related to the parasite and the host. It is known that the immunoregulatory networks in human Chagas disease play a key role in the visceral involvement.6 Some studies have observed that in patients with Chagas disease myocardiopathy, there is a predominant Th1 immune response, with high levels of inflammatory cytokines, such as interferon (IFN)-gamma and tumor necrosis factor (TNF)-alpha.7 However, in patients in the indeterminate phase of Chagas disease, a predominant production of anti-inflammatory cytokines (IL-10) is observed.8 In the acute phase, the Th1 immune response is crucial to control the parasitemia.9 However, scarce information regarding the control of the parasitemia during the indeterminate or chronic phase of the disease is available.

The aim of the present study was to describe the serum cytokine profile of T. cruzi chronically infected patients and to evaluate its relationship with the presence or absence of parasitemia through detection of T. cruzi DNA by PCR in peripheral blood.

This is a retrospective analysis from a prospective observational study that was performed from March to July 2013 at Vall d’Hebron University Hospital (Barcelona, Spain). The initial study was designed to characterize the cutaneous toxicity of benznidazole in patients with Chagas disease and to define the immunological mechanisms involved.10 Adult patients (older than 18 years) with diagnosis of Chagas disease were included; those patients previously treated for Chagas disease, pregnant women, and immunosuppressed patients were excluded. For the present study, participants were only included in the analysis when all the relevant information was available: demographic information (gender, age, and country of origin), clinical data (cardiac or gastrointestinal involvement), and T. cruzi real-time polymerase chain reaction (RT-PCR), and serum cytokine profile was determined in peripheral blood before starting specific treatment.

The diagnosis of Chagas disease was performed through two positive different serological tests according to the WHO recommendations: an ELISA with recombinant antigen (Bioelisa Chagas; Biokit, Lliçà d’Amunt, Spain) and an ELISA with crude antigen (Ortho T. cruzi ELISA; Johnson & Johnson, High Wycombe, United Kingdom).11 Visceral involvement was evaluated through physical examination, 12-lead electrocardiography, chest radiography, and barium enema. For cardiac involvement, patients were stratified following the Kuschnir classification.12 A RT-PCR to detect T. cruzi DNA in peripheral blood pretreated with guanidine ethylenediaminetetraacetic acid (EDTA) was performed in duplicate before starting treatment in all patients according to the method described by Piron et al.13

Categorical data were presented as absolute numbers and proportions, and continuous variables were expressed as medians and ranges. The χ2 test was used to compare the distribution of categorical variables, and the Mann–Whitney U-test for continuous variables. Results were considered statistically significant if the two-tailed P-value was < 0.05. SPSS software for Windows (version 19.0; SPSS Inc, Chicago, IL) was used for statistical analyses.

The strengthening the reporting of observational studies in epidemiology (STROBE) statement guidelines were used to improve the quality of the study. The study protocol was approved by the Ethical Review Board of the Vall d’Hebron University Hospital (Barcelona, Spain), and written informed consent was obtained from all patients. Procedures were performed in accordance with the ethical standards laid down in the Declaration of Helsinki as revised in 2013.

Data are reported as number (%) of patients or median (range).

Data are reported as median value and range.

Data are reported as median value and range.

We studied the serum cytokine profile of 45 patients chronically infected by T. cruzi and residing in a non-endemic country. Interestingly, patients with detectable parasitemia measured through T. cruzi RT-PCR in peripheral blood had a higher concentration of the anti-inflammatory cytokine IL-10 than those with negative T. cruzi RT-PCR.

Anti-inflammatory cytokines play a key role in controlling inflammatory cytokine production; IL-10 (produced by immune cells such as dendritic and regulatory T cells) is an anti-inflammatory cytokine with pleiotropic effects in immunoregulation and inflammation. Whereas the pro-inflammatory Th1 immune response is necessary in the acute phase of Chagas disease to control the parasitemia, in the indeterminate phase, there is an increase in the IL-10 levels that controls the inflammation.9 It has been observed that this anti-inflammatory control should be well balanced to avoid that production of IL-10 does not immunosuppress the cellular response necessary to control the parasitemia but has to be sufficient to control the establishment of inflammation during the chronic phase.8 This necessary and complicated cytokine balance in the chronic phase of the disease could explain the fact that, in our cohort of Chagas disease patients, those with detectable parasitemia had higher IL-10 serum concentrations. However, it is important to note that there are reports that indicate that both in the acute and chronic phases of Chagas disease, the parasitemia induces a serum increase of IL-10 as part of its immune-evasion mechanisms, making it difficult to know if this cytokine profile is the cause or the consequence of parasitemia levels.14,15

There are some situations with a skewed immune response to Th2 (where IL-10 levels are also increased) in which is observed an increase in the probability to detect parasitemia in Chagas disease patients. During the pregnancy, there is a physiological bias to Th2 immune response to increase the fetal survival.16 Some studies have observed that pregnant women with Chagas disease have higher levels of parasitemia, hence being more probable to having a positive T. cruzi RT-PCR.17 Two studies performed by our group demonstrated that Chagas disease patients coinfected with Strongyloides stercoralis (which produces a Th2 immune response and higher IL-10 production) had a higher proportion of patients with positive T. cruzi RT-PCR in peripheral blood than those without coinfection.18,19 These data support the hypothesis of the key role that plays IL-10 in parasitemia control in chronic Chagas disease patients.

Contradictory results have been observed in our study regarding cytokines involved in the innate immune response: serum IL-1beta concentrations were higher in patients with positive T. cruzi RT-PCR, whereas serum IL-8 concentrations were higher in patients with negative T. cruzi RT-PCR. IL-1beta and IL-8 are pro-inflammatory cytokines involved in the innate immune response, produced by different cells (including monocytes, neutrophils, fibroblasts, and endothelial cells), and act as chemotactic factors for neutrophils and lymphocytes. Although the study of the acute phase represents a challenge (it is asymptomatic most of the times), it seems that the innate immune response mediate the control of parasite replication in the early stages of infection.20 The role of the innate immune response in the Chagas disease chronic phase is not well established; however, studies performed in African trypanosomiasis show that the control of parasitemia is related to high serum levels of IL-10 and low levels of IL-8, similarl to those results found in our study.21

This study has some limitations that should be mentioned. The low number of included patients makes it difficult to generalize the results, especially regarding the evaluation of the cytokine profile depending on visceral involvement, because most of the patients in the symptomatic chronic phase of the disease had a very incipient affectation. Moreover, most of the patients were women of Bolivian origin, which makes it difficult to extrapolate the results to a more general population. The determination of T. cruzi RT-PCR in peripheral blood was performed once (it is a cross-sectional study), and it could limit the result interpretation. However, this study gives relevant information about the serum cytokine profile and its relationship with the probability to detect the parasite in peripheral blood and performed in Chagas disease patients outside endemic areas, hence without risk of reinfections in the last years (that could modify the cytokine profile).

Summarizing, in our cohort of chronically infected Chagas disease patients, those patients with detectable parasitemia measured through T. cruzi RT-PCR in peripheral blood had a higher concentration of the anti-inflammatory cytokine IL-10 than those with negative T. cruzi RT-PCR. These results reinforce the key role that plays this anti-inflammatory cytokine in parasitemia control. Further studies are needed to confirm and deepen this immunoregulatory control.