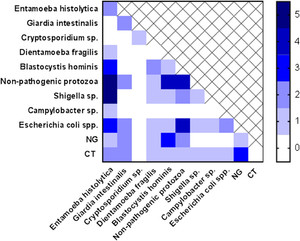 Sexual Transmission of Intestinal Parasites and Other Enteric Pathogens among Men Who Have Sex with Men Presenting Gastrointestinal Symptoms in an STI Unit in Barcelona, Spain: A Cross-Sectional Study

Sexually transmitted infections (STIs) are a major problem worldwide. In addition, the spectrum of STIs is now expanding, including parasitic, bacterial, and viral infections. The study retrospectively describes the presence of enteric pathogens among 73 patients with gastrointestinal symptoms of enteritis and proctocolitis attending to an STI unit in Barcelona, Spain, between 2015 and 2016. Only patients investigated for intestinal parasitic infections were included in the study. Different diagnostic procedures were established for the detection of parasites, bacterial enteropathogens, and other STI agents. Entamoeba histolytica was the most prevalent pathogen in our cohort (20.5%), especially among individuals with proctocolitis. Contrarily, Giardia intestinalis was detected in 11.0% of patients, only associated with enteritis cases. Polymicrobial infections were common in our study (45.2%). Of note, 55.6% of shigellosis cases were coinfected with E. histolytica. The investigation highlights the importance of including parasites as differential gastrointestinal diagnosis, disregarding travel history, particularly among risk populations.

Since sexual transmission of enteric pathogens was first reported in 1967,1 different publications have described parasitic, bacterial, and viral outbreaks worldwide associated with sexual acquisition, predominantly among men who have sex with men (MSM).2–5 Thus, several intestinal protozoan infections, previously reported as tropical related, are now recognized also as sexually transmitted infections (STIs). Oral–anal sex, fingering, or fomites are the most common sexual routes of transmission.6,7 In addition, the current diversity of sexual practices, including sex in group often with anonymous partners, the use of drugs during sexual activities, and the rapid geographical mobility of individuals along countries, makes partner notification and spread control especially complicated.6 Although molecular assays have been implemented for the detection of major STIs,8 the diagnosis of parasitic infections remains being based mostly on direct microscopy. Nevertheless, several antigen detection tests for Entamoeba histolytica (EH), Giardia intestinalis (GI), and Cryptosporidium sp. have been recently developed and may play a key role in rapid diagnosis and guided treatment. The main objective of the study was to describe the presence of intestinal parasites and other enteric pathogens among patients with gastrointestinal symptoms attending to a referral STI unit in Barcelona, Spain.

The research was conducted retrospectively among individuals with gastrointestinal symptoms of enteritis or proctocolitis attending to the STI Unit Vall d’Hebron-Drassanes in Barcelona, Spain, between January 2015 and December 2016. Enteritis was considered when large-volume watery diarrhea, abdominal cramps, nausea, malaise, or weight loss was present.9,10 On the other hand, proctocolitis was defined as the presence of milder symptoms of enteritis with additional abdominal tenderness, anorectal bleeding and mucopurulent discharge, or tenesmus.9,10 Only patients investigated for intestinal parasitic infections were systematically included in the study.

Different diagnostic procedures were established according to the medical criteria. Wet mounts for direct microscopic observation of fresh stools and Crypto/Giardia Duo-Strip antigen detection assays (Coris Bioconcepts, Gembloux, Belgium) were used to identify parasites from fecal samples in cases of acute diarrhea. Also, the ELISA Entamoeba CELISA Path (Cellabs, Sydney, Australia) was used for the detection of EH in diarrheal feces or for confirmation of EH-compatible forms at microscopic observation. On the other hand, concentrated stained smears of stool specimens for microscopic examination were performed in all gastrointestinal syndromes for the detection of both pathogenic and commensal protozoa.

Sociodemographic and clinical characteristics of the patients were collected through a comprehensive review of the medical record. The Chi-squared tests, or the Fisher exact test when appropriate, were used to compare categorical variables. Mann–Whitney U-tests were performed between continuous variables. Odds ratios (ORs) and their corresponding 95% CIs were calculated when appropriate. Differences with P < 0.05 were considered statistically significant. Ethical approval for the study was obtained from the Vall d’Hebron University Hospital Ethics Committee (approval number 405/2018).

A total of 73 patients were attended for gastrointestinal symptoms during the study period. The clinical and epidemiological characteristics of the study population are summarized in Table 1. All study individuals were MSM (based on the gender of sex partners), of whom 68.5% (95% CI, 56.6–78.9%) were HIV positive.

Clinical and epidemiological characteristics of the 73 patients studied, stratified by the presence or absence of parasites

* Travel to tropical or subtropical regions.

The presence of parasites and other enteric pathogens found in our cohort is described in Table 2. Entamoeba histolytica resulted the most prevalent pathogen (20.5% [95% CI, 12.0–31.6%]), especially among individuals with proctocolitis. On the contrary, GI was detected in 11.0% of patients (95% CI, 4.9–20.5%) and it was only associated with enteritis cases. The prevalence of shigellosis among the study population was 13.0% (95% CI, 6.1–23.3%), more prevalent among proctocolitis cases. Furthermore, the prevalence of the STIs NG and CT was also higher among proctocolitis cases (33.3% [95% CI, 11.8–61.6%]) than the one among enteritis syndromes (17.0% [95% CI, 7.6–30.8%]). It is noteworthy that all CT infections detected among patients with proctocolitis were caused by LGV genotypes.

Prevalence of protozoa, enteropathogenic bacteria, and other STI agents in our cohort, stratified by clinical syndrome

‡ Shigella flexneri was the most common specie in our cohort accounting for seven cases, whereas only two were caused by Shigella sonnei.

§ Nine E. coli syndromes were caused by enteropathogenic (EPEC) strains, three by enterotoxigenic (ETEC), and one by enteroinvasive (EIEC).

In our cohort, all symptomatic individuals recruited were MSM, of whom 68.5% were HIV positive. Men who have sex with men remain, indeed, at a higher risk for STIs in comparison to other populations.11 In addition, previous investigations have suggested that sexual risk behaviors may have increased among HIV-positive patients, likely because of the introduction of highly active antiretroviral therapy (HAART) and the absence of HIV transmission once undetectable, expanding the prevalence of STIs, including intestinal parasites, in this subpopulation.9,12 This fact may account for the notable prevalence of HIV-infected MSM in our cohort. Of note, information regarding CD4 count, viral load, or HAART is missing among HIV-infected participants.

Despite protozoan infections are frequently asymptomatic and self-limited, they can also cause intestinal symptoms. We found EH to be the most prevalent pathogen, especially among individuals with proctocolitis. Although the prevalence of EH among general population in non-endemic areas is low,13 amebiasis has become a major concern in MSM. Because protozoans are transmitted by the fecal–oral route, direct or indirect oral–anal sex is considered the main reason for the increased rates of EH carriage in this population.9 History of syphilis, a marker of risky sexual behavior, and recent travel to tropical/subtropical regions were associated with amebiasis in our cohort, although not reaching significance. These risk factors have been similarly correlated with the presence of protozoan infections in previous reports.9 Giardia intestinalis, also notably prevalent in our study population (11.0%), was only present in cases of enteritis. In fact, the affinity of this protozoan to cause inflammation of the small intestine rather than proctitis symptoms is well established.9,10,14 Because EH and GI need a very low infective dose (10–100 cysts), they are both more likely to be sexually transmitted. Dientamoeba fragilis and Blastocystis hominis are only occasionally implicated in diarrhea in humans.15,16 These parasites and other commensal protozoan were frequent in our cohort (26.0%), mostly as concomitant findings. Despite the unclear clinical impact of these microorganisms, their presence indicates fecal contamination and, as a consequence, strongly supports a vigorous search for pathogens in additional samples.17,18 The low prevalence of cryptosporidiosis in our study (1.4%), strongly associated with MSM suffering from AIDS, is consistent with a generally well-controlled HIV population in developed countries because of the use of HAART.19

In sexually related gastrointestinal syndromes, polymicrobial infections are common, particularly in proctocolitis cases.20 Thus, almost half of the individuals studied (45.2%) harbored polymicrobial infections. It is remarkable that in 55.6% of shigellosis cases, EH was also detected. Because both organisms share human niche (colon) and probable syndrome (proctocolitis), these pathogens should be screened in case of gastrointestinal syndromes. Neisseria gonorrhoeae and CT infections likely contributed little to symptoms and they may mostly represent an asymptomatic carriage found during STI screening in our study population. Nevertheless, it is important to consider both rectal infections in individuals reporting receptive condomless anal intercourse as part of the routine STI screening, particularly in the presence of gastrointestinal symptoms.10

Some limitations to our report must be addressed. First of all, because of the retrospective design of the study, sociodemographic and clinical registrations might be missing. In addition, because the record of these data relies on the clinician, information may be susceptible to misreporting. It is also important to point that sexual transmission of the intestinal pathogens is presumed because patients were attended to the STI unit referring sexual risk behaviors; nevertheless, other routes of spread cannot be discarded. Finally, only individuals investigated for intestinal parasites were incorporated to the research. Thus, certain risk groups such as MSM or HIV-positive individuals may be overrepresented, whereas some other patients with gastrointestinal symptoms may have been excluded, biasing the incidence of protozoan infections in our study population.

In conclusion, the study manages to explore the presence of intestinal parasites and other enteric pathogens among MSM with presumptive sexually acquired gastrointestinal infections attending to an STI unit in Barcelona, Spain. Among individuals reporting sexual risk activities, the differential diagnosis of gastrointestinal disease should include parasites disregarding travel history, especially in MSM. In addition, the use of rapid techniques, such as stool antigen detection assays or wet mounts, may be helpful in STI units for a rapid diagnosis and management of parasitic gastrointestinal infections. Although sexual transmission of intestinal parasites is well known in specialized STI units, general practitioners may not be fully aware of this route of spread with the consequent underdiagnosis of these infections. Additional screening of further STIs should be offered to individuals reporting sexual risk conducts. Furthermore, a proper sexual education, especially hygienic measures, in these risk populations may control reinfection and sexual spread of intestinal protozoan infections.