A line graph of the cases in the longitudinal cohort study showing results of Schistosoma haematobium egg counts in urine (per 10 mL) and semen (per mL), and Ct values for real-time polymerase chain reaction on semen at baseline, 1-, 3-, and 6-month follow-up studies. 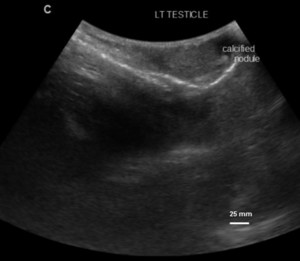 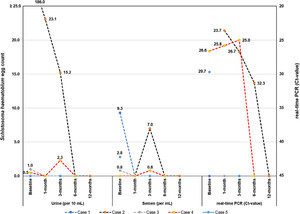 Urogenital schistosomiasis causes morbidity within the genitalia but is underreported and infrequently examined in men. To draw attention to male genital schistosomiasis (MGS), a longitudinal cohort study was conducted among fishermen along the southwestern shoreline of Lake Malawi. A case series of five participants is presented inclusive of questionnaire interviews, parasitological examinations, ultrasonography, and provision of a standard dose (40 mg/kg) of praziquantel (PZQ) treatment at baseline, 1-, 3-, 6-, and 12-month follow-up time points. Eggs of Schistosoma haematobium were observed in urine or semen across all time points; parasitological diagnostics were bolstered by real-time PCR for Schistosoma DNA in semen and by portable ultrasonography to document putative MGS-associated morbidity. We highlight the importance of developing standard diagnostic tests for MGS and increasing the accessibility of PZQ treatment to men, especially those in at-risk endemic areas.

Study participants underwent transabdominal and scrotal ultrasonography examinations for genital pathologies before receiving praziquantel (PZQ) at standard dose (40 mg/kg). They were invited for follow-up studies at 1-, 3-, 6-, and 12-month time points. Research ethical clearance was granted by the Liverpool School of Tropical Medicine (LSTM) Research Ethics Committee in the United Kingdom and the National Health Sciences Research Committee in Malawi (NHSRC).

Overall characteristics of the participant cohort at baseline include the following: prevalence of Schistosoma haematobium egg patency in urine was 17.1% (n = 210, mean = 14.8 eggs per 10 mL) and in semen was 10.4% (n = 114, mean = 5.9 eggs per mL), whereas on real-time PCR, it increased to 26.6%. The prevalence of intestinal schistosomiasis was 3.8%, as estimated using POC-CCA tests.

LN, a 20-year-old man, weighing 66 kg, lives on Lake Malawi shores since birth and has been fishing for the past 10 years. He reported body weakness and increasing urinary frequency for a month and also noted delayed or no ejaculation during coitus, together with reduced semen volume. He reported terminal hematuria between age 9 and 14 years, which was treated. In the past year, he received PZQ as part of the annual mass drug administration (MDA) campaign in the district.

On examination, his urine sample was of normal color with no turbidity, and the reagent strip was negative for leukocytes and blood but with trace of protein. The POC-CCA test on urine was negative, and no S. haematobium egg was observed after filtration. In his 1.5-mL semen specimen, 14 eggs and 60 leukocytes were detected by direct clear-bag microscopy and 10 eggs after centrifugation. However, real-time PCR was subsequently negative. Ultrasonography was normal. He was given PZQ, and follow-up at 1, 3, and 12 months revealed no abnormalities or symptoms previously reported.

AJ, a 44-year-old man, 57.9 kg body weight, has been fishing in the lake for 32 years, where he bathes and washes daily. He was stable on antiretroviral therapy for HIV infection for over 6 months. For a month, he experienced headache, dysuria, hematuria, blood in stool, hemospermia, and genital pain, sometimes on ejaculation. Together with his wife, he suspected sexually transmitted infection (STI) and had accessed treatment. He also suspected schistosomiasis but did not access treatment.

He was unable to submit a semen specimen for examination, although his urine was of normal color and reagent strip was positive for leukocytes (1+), protein (1+), and blood (microhematuria 3+), with a positive POC-CCA test. After filtration, 744 and 488 S. haematobium eggs were detected in 40 mL and 50 mL urine samples, respectively, submitted on 2 alternate days. Genital ultrasonography was normal (Figure 1A), and he was given PZQ on each of the 2 days. At 1-month follow-up, his symptoms had improved and submitted 1 mL semen which had no eggs, and real-time PCR was positive (Ct value = 23.7). However, his 35-mL urine sample showed 81 S. haematobium eggs and a negative POC-CCA test. Ultrasonography revealed a 12.7-mm left hydrocele (Figure 1B). Praziquantel was given again.

At the 3-month follow-up, he complained of having had genital sores in the preceding month, although a venereal disease research laboratory serological test was negative for syphilis antibodies. His 160-mL urine sample contained 243 S. haematobium eggs, trace for protein and was negative for POC-CCA test. In his 1-mL semen specimen, seven and four eggs were observed on bag and centrifugation methods, respectively, and was positive by real-time PCR (Ct value = 26.7). The left hydrocele was still present on genital ultrasonography (17.7 mm), and PZQ was provided again (Figure 1C). At the 6-month follow-up, the only notable finding was a positive semen real-time PCR (Ct value = 32.3) (Figure 1D), while at 12 months, no abnormal results were observed, and real-time PCR was negative.

SK, a 49-year-old man, 51.5 kg body weight, has lived along the lake since birth and has been fishing for the past 10 years. He had episodes of headache, dysuria, urine color changes, and blood in stool for over a month. He received PZQ in the past year during the annual MDA campaign.

His urine was of normal color with microhematuria (2+) and proteinuria (1+) but no leukocytes, and showed a negative POC-CCA test, and five S. haematobium eggs were observed after filtration. In his 4-mL semen specimen, two eggs and 12 leukocytes were observed using the bag method and three eggs after centrifugation. On ultrasonography, a calcified nodule in the left testis was noted (Figure 2).

Praziquantel was offered at this baseline presentation and at 1- and 3-month follow-up. No S. haematobium eggs were observed in urine or semen, and real-time PCR was negative, although ultrasonography showed mild bilateral hydroceles. After PZQ, he was lost to follow-up at 6- and 12-month time points.

ARK, a 27-year-old man, 59 kg body weight, has been fishing daily in the lake for 5 years, where he bathes and washes his clothes regularly. He did not report any symptoms or receive PZQ during annual MDA campaigns.

His 110-mL urine sample was of normal color, and negative for leukocytes, protein, and POC-CCA, although the reagent strip test showed microhematuria (1+), and 12 S. haematobium eggs were observed. No eggs or leukocytes were observed on microscopy in his 2-mL semen specimen, although real-time PCR was positive (Ct value = 26.6). Ultrasonography was normal, and PZQ was given. At 1-month follow-up, where PZQ was given again, his semen remained positive by real-time PCR (Ct value = 25.8), although no eggs were seen in the urine and ultrasonography was normal. At 3-month follow-up, 18 eggs were observed in an 80-mL urine sample and two eggs in a 2.5-mL semen specimen (centrifugation only), with positive real-time PCR (Ct value = 25.0) and abnormal bladder shape and mild wall thickness (5–10 mm) revealed on ultrasonography. Urine, semen, and ultrasonography results were normal at 6 months, with negative real-time PCR.

TF, a 47-year-old man, 60.3 kg body weight, lives near the lake and has been fishing for 5 years, where he bathes and washes his clothes daily. He experienced dysuria, urine frequency, and urine color change for a month, and episodes of malaria, dysentery, worm infestation, and STI for that duration.

His urine was of normal color, and the reagent strip test detected proteinuria (2+) and microhematuria (3+); however, POC-CCA was negative, with no S. haematobium eggs detected. His 4-mL semen specimen revealed 11 eggs on microscopy after centrifugation and was positive by real-time PCR (Ct value = 29.7). Ultrasonography was normal, and PZQ was provided. At the 3-month follow-up, no Schistosoma eggs were detected in urine or semen, with his semen now negative by real-time PCR. However, ultrasonography revealed a mildly enlarged bladder wall and asymmetrical, enlarged seminal vesicles (≥ 15 mm). Praziquantel was given again, and he was lost to follow-up at 6- and 12-month time points.

Schistosomiasis, a waterborne parasitic disease associated with poverty, is prevalent in many tropical and subtropical countries, especially those in sub-Saharan Africa (SSA). The disease afflicts over 200 million people worldwide, and in SSA, S. haematobium and Schistosoma mansoni occur, causing urogenital and intestinal schistosomiasis, respectively.5–7 Male genital schistosomiasis is a gender-specific manifestation of urogenital schistosomiasis, being first reported in 19118 and associated with the presence of schistosome eggs and pathologies in genital fluids and organs. Features described include genital or ejaculatory pain, hemospermia, infertility, abnormal enlarged organs,9,10 as well as, granulomatous infiltration, fibrosis, and calcifications on postmortem, histopathological, and radiological examinations.11–13 Despite these descriptions and significant schistosomiasis burden in SSA, MGS often remains undiagnosed and underreported within endemic regions like the shoreline of Lake Malawi.14 It is also of note that some of these men also have intestinal schistosomiasis as evidenced by the POC-CCA test, which is consistent with local emergence of autochthonous transmission of S. mansoni in this part of the lake.15

To our knowledge, this case series from our longitudinal cohort study provides a unique description of MGS among local fishermen in an endemic setting of Lake Malawi shoreline in SSA. Our cases presented symptoms of MGS described in the literature, which can be mistaken for STI as in the example described in “Case 2,” and, thus, incorrectly received routine syndromic STI management,16 highlighting the mistaken diagnosis and mismanagement of MGS treatable with PZQ.17,18

The changing clinical presentations and parasitological results of our cases highlight the challenges associated with MGS diagnosis and management, requiring the development of better, low-cost, accessible, sensitive, and specific diagnostic tests. Although real-time PCR demonstrates greater ability to incriminate most cases, it remains relatively expensive and not always available in endemic areas. The downward trend in egg count and clinical improvement of our cases after standard PZQ treatment at 1 month and later show parasitological clearance of eggs in semen and putative cure of the infection (Figure 3). Repeated or increased PZQ doses could be further beneficial in individual patient management when cases of high egg intensity infection are seen, for example, in “Case 2,” in addition to other prevention measures for schistosomiasis.

Furthermore, organ-specific pathologies in seminal vesicles, testes, and prostrate alongside the urinary bladder, resulting from MGS, can be observed on ultrasonography. Encouragingly, these cases (Cases 2, 3, and 5) show a degree of some observed resolution after PZQ treatment. Comprehensive clinical assessment is essential to exclude other important diseases such as STI, tuberculosis, and malignancy which present similar symptomatology and pathologies as MGS.

Genital inflammation triggered by Schistosoma eggs has been shown to increase cytokine levels, such as interleukin-6 and tumor necrosis factor-α. These cytokines can facilitate HIV replication, which can increase seminal viral shedding, alluding to a plausible additional risk of HIV transmission from males infected with HIV and urogenital schistosomiasis.19–21 Examples such as Case 2 describing the coinfection of these two diseases could in future provide opportunities for further virological and immunological analyses to illustrate the impact of routine preventive PZQ treatment on the potential risk of HIV transmission among dually infected fishermen and other high-risk populations in endemic areas. Furthermore, additional diagnostic investigations to exclude other diseases such as STIs, which could be present in this case, would be informative.

In conclusion, this case series better describes the occurrence of MGS among local fishermen from an area endemic for schistosomiasis along the shoreline of Lake Malawi where about just more than a fifth of all sampled men have active urogenital schistosomiasis. In Malawi, MGS has been underreported and remains overlooked by many medical professionals, highlighting the challenges relating to awareness of MGS in both health professionals and men at risk alongside their health-seeking behaviors, point-of-contact diagnostic limitations, and clinical management strategies. It is very clear that targeted future research on MGS and its coexistence with other common diseases, such as HIV, is needed in endemic areas.