(A) Tenosynovitis of the ring finger. (B) Magnetic resonance imaging of the finger. (C) Appearance of the finger after 3 months of antibiotic treatment. 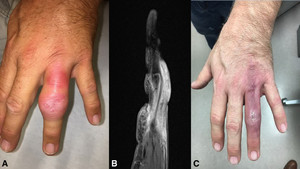 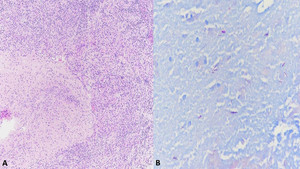 A 51-year-old man, resident of Long Island, New York, and an avid seaman (spends all the weekends on keeping his boat in a good sailing condition), presented to the emergency department with a nonhealing swelling of the left fourth finger. He had sustained an injury due to a wood splinter on the same finger while working on his boat about 15 months before admission. After removing the splinter, a painless chronic mild swelling persisted for months. A month before admission, he received in the 4th finger a local steroid injection for possible gout, which resulted in worsening of the swelling to the point that his wedding ring had to be cut off to alleviate the pressure.

A well-demarcated swelling and redness was noted at the left 4th proximal interphalangeal (PIP) joint and dorsum of the finger (Figure 1A). A magnetic resonance imaging showed increased T2-weighted signal and enhancement involving only the soft tissues and small amount of fluid on the 4th PIP joint and extensor tendons (tenosynovitis), but no enhancement of the bone (Figure 1B). His white blood cell count was 9,710 ells/cm3 and C-reactive protein was 1.1 mg/L. There was no history of immunosuppression; he refused an HIV test. An incision and drainage (I&D) was performed, but no gross purulence was found, except for an extensive granulation tissue down to the tendon sheath. The histology depicted necrotic debris and granulation tissue with many acid-fast staining organisms, and Mycobacterium marinum was isolated in AFB culture incubated at 32°C at day 10 from I&D (Figure 2A and B). The final diagnosis was tenosynovitis due to M. marinum.

This is a fast-growing nontuberculous mycobacterium that is often acquired via traumatic injuries leading to infection by direct inoculation from fish fins, fish bites, or water from fish tanks.1 Clinical manifestations include papules, nodules, erythematous plaques, ulcerations, and sporotrichoid-like lesions mostly in the upper limbs. Cases of solitary nontender nodules on the hands of people working on boats have been reported.2,3

A failure to elicit the history of potential exposure and microbiologic features of this organism is responsible for the often-delayed diagnosis. The incubation period of M. marinum can be from weeks to months after the inoculation.3 Invasive form of the infection involves deep structures such as tendon, synovium, and bone; these infections are often identified following corticosteroid therapy. Our patient did receive a corticosteroid injection locally followed by clinical worsening, which may have contributed by both suppressing the immune system and inoculating the organism. Corticosteroids may decrease the cytokine profile of macrophages, leading to a reduced host defense against mycobacterial infections and granuloma formation,4 and they may inhibit the necrotic cell death of infected Mycobacterium cells, which may perpetuate the survival of the bacteria in the cells.5

In a recent meta-analysis, local or systemic suppression of the immune system by corticosteroids was a common culprit for invasive M. marinum infections.6 A delayed diagnosis was also observed (∼17 months from symptom onset).6

Histopathologic findings can range from nonspecific inflammatory infiltrate to poorly formed, well-formed, necrotizing, and non-necrotizing granulomas. Acid-fast staining organisms are most frequently localized in necrotic and suppurative cores of the granulomas.7

There is no established therapy of choice for M. marinum infections. Most cases of invasive infections require surgical debridement, and combination antibiotic treatment is needed, with duration of therapy ranging from 3 to 6 months depending on the degree of cutaneous involvement.8 Clarithromycin with rifampin or ethambutol is the usual choice. Other antibiotics such as tetracyclines and trimethoprim–sulfamethoxazole can also be used.8,9 Our patient was treated with clarithromycin and rifampin for 12 months. No antibiotic susceptibility was performed by the laboratory of reference. Figure 1B depicts the finger after 3 months of antibiotics, and decision was made to extend therapy because of deep structure infection and reported failures with short regimens.9 At the end of the treatment, there was no more erythema or swelling, or pain with movement, and the incision was well healed.