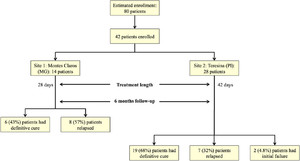 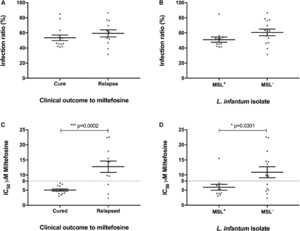 In India, visceral leishmaniasis (VL) caused by Leishmania donovani has been successfully treated with miltefosine with a cure rate of > 90%. To assess the efficacy and safety of oral miltefosine against Brazilian VL, which is caused by Leishmania infantum, a phase II, open-label, dose-escalation study of oral miltefosine was conducted in children (aged 2–12 years) and adolescent-adults (aged 13–60 years). Definitive cure was assessed at a 6-month follow-up visit. The cure rate was only 42% (6 of 14 patients) with a recommended treatment of 28 days and 68% (19 of 28 patients) with an extended treatment of 42 days. The in vitro miltefosine susceptibility profile of intracellular amastigote stages of the pretreatment isolates, from cured and relapsed patients, showed a positive correlation with the clinical outcome. The IC50 mean (SEM) of eventual cures was 5.1 (0.4) µM, whereas that of eventual failures was 12.8 (1.9) µM (P = 0.0002). An IC50 above 8.0 µM predicts failure with 82% sensitivity and 100% specificity. The finding of L. infantum amastigotes resistant to miltefosine in isolates from patients who eventually failed treatment strongly suggests natural resistance to this drug, as miltefosine had never been used in Brazil before this trial was carried out.