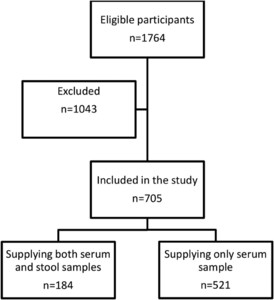 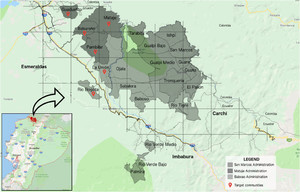 The Awa indigenous people of Ecuador have long been excluded from health programs and activities implemented by the public health system, as they live very isolated in the rainforest.1 Since 2004, Centro de Epidemiología Comunitaria y Medicina Tropical (CECOMET, center for community epidemiology and tropical medicine, an institution of the apostolic vicariate of Esmeraldas, active in the Borbon District since 1996) has collaborated with the primary health-care services in San Lorenzo health district, with a special focus on community epidemiology.2 On request from the Federation of the Awa communities of Ecuador (Federacion de Centros Awa del Ecuador [FCAE]), in 2005/2006, public health teams visited the remote communities for the first time and started the training of the community health workers (CHWs). Currently, in each community, there are one or two CHWs who monitor risk groups and record births and deaths. In five communities, there is a primary care center, and each community refers to a health center with a team composed by a doctor, a nurse, an obstetrician, and a dentist. The communities are visited by this team four to five times a year. Albendazole is distributed to preschool and school-age children at least twice a year. Also, adults are often treated with albendazole during the site visits, although not in the context of specific interventions.

The identification of some triatomines, collected by the community, positive for Trypanosoma cruzi, triggered a discussion process at the community level with the aid of the leaders of the FCAE about this “unknown and dangerous disease” for the population, a process that led, after 1 year of discussion, to the collective and shared decision to define the magnitude of the problem through a serological survey (the preliminary results were published previously3). The discussion process progressively included also other conditions (such as anemia, diarrhea, and itching), possibly associated with other parasitic infections. The aim of this survey was to investigate the prevalence of parasitic infections in the communities.

The study protocol was approved by the Ethics Committee of the Central University of Ecuador on the November 22, 2013. Preliminarily to the survey, an intensification of educational activities focusing on the targeted parasites was conducted. All individuals who gave informed, written consent (parents’ or guardians’ consent, in case of children) were included in the study. For each participant, CECOMET staff collected the blood samples during the site visits in each community. The samples were centrifuged in loco, and then transported to the laboratory of Biomedicine of the Central University of Ecuador, where they were tested with two different ELISA assays (Chagas test and BiosChile) for Chagas disease and with an ELISA assay for Strongyloides (Strongyloides ELISA, Bordier Affinity Products SA). All tests were performed according to the manufacturer’s instructions. Given that the cutoff value for positive results differs between runs in the Strongyloides kit, for the study purpose, the results of this test were reported as normalized optical density (nOD), calculated as the OD to the cutoff ratio. Based on a previous diagnostic study, nOD ≥ 1 was considered positive.

Moreover, each individual was asked to supply one fecal sample. Centro de Epidemiología Comunitaria y Medicina Tropical staff collected the feces in formol-ether 10%, for microscopy examination according to a modified Ritchie’s technique, which was performed at the laboratory of Biomedicine of the Central University of Ecuador.

Each participant received a written copy of the results of his/her laboratory tests, and all subjects found positive at a given pathogen were treated according to the best practice. The results of the survey were commented by CECOMET staff with the CHW of each community, with the leaders of the FCAE, and with the staff of the health district. Statistical analysis was performed using Epi Info ed 7 (CDC, Atlanta, GA). The results were reported as frequencies and proportions.

The screening activities were conducted in most communities between 2014 and 2015. Two communities, La Union and Río Bogotá, were screened also in 2017. At the time of the screening, the population of the six communities comprised 1764 people (858 women and 906 men), of whom 925 were younger than 18 years. Family units were 319. Individuals giving their consent to the study were 705, representing 40% of the whole Awa population living in the targeted communities (Figure 1). Children (< 18 years of age) were 334 (47% of participants). Family units screened were 217, representing 68% of the existing units. Females were 393 (55.7%), males 312. Of the 184 people providing a stool sample, 108 (58.7%) were females and 86 (46.7%) were children. Twenty-nine individuals (15.8%) had a negative result. The most prevalent protozoa found were Entamoeba histolytica/dispar (86/184 positive samples, 46.7%), Entamoeba coli (70/184, 38%), and Giardia intestinalis (20/184 samples, 10.9%). The Entamoeba histolytica/dispar samples were further analyzed by real-time PCR in the context of another study, and they all resulted E. dispar.4 Stool examination showed a high prevalence of soil-transmitted helminths (STH): 62.5% (115 of 184). In particular, A. lumbricoides was the STH with the highest prevalence (101 individuals infected, 54.9% of people tested with stool microscopy), followed by T. trichiura (68 individuals, 36.9%). No hookworm eggs were found. Table 1 reports the distribution of positive results for STH (Figure 2).

Prevalence of soil-transmitted helminths by age group and gender

In addition, Strongyloides stercoralis larvae were found in eight individuals (4.3%). Individuals testing positive to Strongyloides ELISA were 160 (22.7%), of whom three had larvae in stool (Table 1).

The preliminary results of the screening for T. cruzi have been reported previously.3

The first observation relates to the striking participation of the Awa population, who massively participated in the first parasitic infection survey they were ever offered: 40% of the total Awa population (and 68% of the family units). These results support the benefit of the community epidemiology approach, which entails a deep involvement of the community in the decisional process. Indeed, this approach permitted to achieve impressive results in programs aimed at the control and even elimination of relevant parasitic infections in Ecuador and other settings.5–7

Although all participants accepted the blood sampling, a lower proportion (26%) supplied a stool sample. Probably, in most cases, this was due to cultural barriers, but it should also be considered that individuals living far from the main village presumably had difficulties in heading out on the long journey once again, a few days after the bleeding, to provide the stool sample. However, it must be considered that this was the very first time that this indigenous community supplied fecal samples; previous attempts to obtain stools for parasitological examinations, even from children with diarrhea, were unsuccessful. Therefore, in this context, the number of individuals supplying a stool sample can be considered exceptionally high.

Protozoa were mostly nonpathogenic, although a relevant proportion (about 11% of people tested) presented G. intestinalis infection, which can explain part of the cases of diarrhea and abdominal symptoms reported. The inadequate disposal of both human and animal feces in the villages and in a nearby stream was identified as sources of the infection. These issues were raised with the community; however, adequate solutions cannot be easily implemented in that remote setting.

Soil-transmitted helminths were the parasites most frequently observed, in particular A. lumbricoides eggs were found in more than half people tested. Reinfection (due to the scarce use of latrines) presumably hampers a relevant reduction of the prevalence, despite the frequent rounds of albendazole. As for the surprising absence of hookworm, similar data were found in a previous survey carried out in in schoolchildren living in different provinces of Ecuador (in particular in coastal areas).8

It must also be considered that the examination of a single stool sample can possibly cause an underestimation of the prevalence of helminth infections. This is particularly true for S. stercoralis, which is hardly detected by direct microscopy observation.9 Considering this limitation, 4% of individuals with larvae in feces (and 7% of children) are by no mean a negligible finding. Obviously, serology (i.e., the most sensitive technique for S. stercoralis) found a higher proportion of positive individuals (about 23%), although some false-positive results are possible. However, a previous diagnostic study demonstrated that cross-reactions are limited.10

The STH can be responsible for significant morbidity, particularly in children, who were the most affected.11 Moreover, strongyloidiasis can be life-threatening in immunocompromised people.12 Besides albendazole (that has minimal efficacy against S. stercoralis13), other control measures would be needed. For instance, availability of ivermectin would have an impact on the prevalence of strongyloidiasis and, probably, of T. trichiura infection (the combination of albendazole and ivermectin resulting in higher efficacy against this helminth).14 Community health worker and FCAE promoted the use of latrines and sought funds to provide them to requesting households.