(A and B) Sagittal fat-suppressed T2-weighted and (C and D) corresponding sagittal contrast-enhanced fat-suppressed MR images of the spine show diffuse hyperintensity and post-contrast enhancement of multiple cervical, thoracic, and lumbosacral vertebrae (arrows in A–D). A uniform enhancement of an epidural collection indicative of a phlegmon (arrowhead in B and D) as well as a prevertebral tissue thickening extending from C2 to C7 (square brackets in A and C) and a prevertebral abscess from C4 to C5 (star in A and C) is also evident. 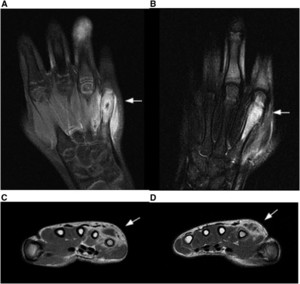 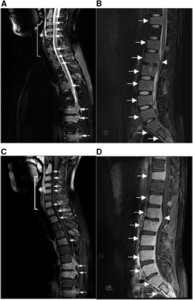 We report a case of a 13-year-old immunocompetent male with multifocal tubercular osteomyelitis involving several spinal segments, small bones of the hands, and the scalp, who started with progressively back pain and enlarging painful swelling on the palms of hands, fatigue, and irregular fever. All the hand lesions were firm, mildly tender, and covered by ulcerated skin with serous discharge from the site. Magnetic resonance showed lesions of the right fifth metacarpal, of the right intermediate phalanx of the fourth finger, of the left second metacarpal, and of most vertebral bodies of the cervical, dorsal, lumbar, and sacral spine. The nucleic acid amplification test and the final culture from the drainage of the hands’ lesion were positive for Mycobacterium tuberculosis. The patient received a standard antitubercular treatment for 12 months with clinical improvement.

A 13-year-old male, born in Italy from Filipino parents, presented to our hospital for a 4-month history of progressively worsening back pain and enlarging painful swelling on the palms of both hands associated with fatigue and irregular fever since 2 weeks. He denied cough, hemoptysis, and weight loss. His previous medical history was unremarkable. Exploring risk factors, he reported a history of travel to the Philippines 2 years earlier; his family history was negative for tuberculosis (TB).

At the hospital admission, he was eupneic, tachycardic (105 bpm), and afebrile. Chest, cardiovascular, abdomen, and neurological examinations were unremarkable. During physical examination, kyphosis and swelling extending along the second metacarpal of the left hand, and the fifth metacarpal and the fourth intermediate phalanx of the right hand, were noticed. All the hand lesions were firm, mildly tender, and covered by ulcerated skin with serous discharge from the site (Figure 1).

Laboratory studies revealed a hemoglobin of 11.8 g/dL and a white blood cell count of 9,000/mm3, with neutrophils of 7,300/mm3 and a platelet count of 632,000/mm3. His C-reactive protein (CRP) was 42.7 mg/L. He was found to be HIV negative. QuantiFERON-Tb Gold resulted positive (2.24 Interferon γ UI/mL following stimulation with the Mycobacterium tuberculosis–specific antigens).

Magnetic resonance (MR) imaging of both hands revealed lesions of the right fifth metacarpal, of the right intermediate phalanx of the fourth finger, and of the left second metacarpal. All lesions were exophytic and heterogeneous, associated with soft tissue swelling and displaced extensor tendons (Figure 2).

Spine MR examination showed abnormal signal, characterized by low intensity on T1-w, high intensity on T2-w fat-suppressed images, and abnormal post-contrast enhancement, in most vertebral bodies of the cervical, dorsal, lumbar, and sacral spine. Moreover, MR imaging also showed a prevertebral tissue thickening extending from C2 to C7 with anterior esophageal dislocation; involvement of costovertebral joints from D8 to D11 with epidural extension; erosion of L2–L3 endplates, with minimal involvement of the disk; and intraspinal and paraspinal extension of the disease process with involvement of the left iliacus muscle (Figure 3).

In light of these findings, a neoplasm was suspected and the patient underwent a surgical biopsy of the right intermediate phalanx. The histological examination showed granulomatous inflammation with epithelioid cells, multinucleated giant cells, and necrosis. Therefore, acid-fast bacilli smear microscopy was performed on drainage of hands’ lesion, which resulted negative, whereas nucleic acid amplification test and final culture report were positive for M. tuberculosis.1 To the same extent, culture of induced sputum was positive for M. tuberculosis. Phenotypic drug susceptibility testing showed susceptibility of the isolated strain to all the first-line antitubercular drugs.

A standard quadruple antitubercular treatment, including rifampicin, isoniazid, ethambutol, and pyrazinamide, was started and continued for 2 months, followed by rifampicin and isoniazid for the next 10 months. He also wore a thoracolumbar rigid orthosis for 12 months.

After 12 months since antitubercular therapy stop, the back pain was completely resolved, the hands’ lesions healed, and CRP normalized.

Tubercular osteomyelitis is an uncommon form of extrapulmonary TB, accounting for approximately 10% of extrapulmonary TB and 1–2% of all cases of TB.2 Although bone involvement in course of TB has been most commonly described in areas of high TB endemicity, tubercular osteomyelitis should be considered as differential diagnosis also in patients coming from low prevalence countries. Indeed, data from the European Union/European Economic Area showed an increase in the proportion of patients with extrapulmonary TB from 16.4% in 2002 to 22.4% in 2011.3,4 Immunocompromised patients (especially HIV infected, on immunosuppressive therapy, and on hemodialysis) are at higher risk of developing extrapulmonary TB.

Among the different localizations of tubercular osteomyelitis, spinal TB (Pott’s disease) is the most common form, accounting for 43% of cases, and one of the most dangerous forms in terms of long-term sequelae.3 Thoracolumbar region is the most common affected site and, generally, adjacent vertebrae with the intervertebral disk are involved in the infective process.5

Multifocal tubercular osteomyelitis is an extremely rare disease, especially in non-immunocompromised patients from non-endemic area, which may lead to misdiagnosis and cause delay in starting appropriate treatment, with poor prognosis for the patient.6

As to the spinal TB, typically, through the early wave of dissemination occurring during the first weeks of the infection, two or more contiguous vertebrae are involved because one intervertebral artery supplies two adjacent vertebrae.7 Generally, the lesion begins from the anterior vertebral body adjacent to the end plate, involving the disc and resulting in disc destruction; posterior element involvement is unusual.8 Despite the involvement of multilevel noncontiguous spinal TB is not uncommon,5 extensive diffusion throughout the spine is very rare and may mimic malignant disease.6 Indeed, the main differential diagnoses of tubercular spondylodiscitis include not only pyogenic and fungal infections and other granulomatous conditions such as sarcoidosis but also metastases and lymphoma.8 Our case represented a diagnostic challenge because our young patient presented the involvement of most cervical, dorsal, lumbar, and sacral vertebrae, and costovertebral joint with sparing or minimal involvement of the intervertebral disc, which is an extremely rare condition. Although bone destruction by mycobacteria is generally more severe in children than adults, these lesions heal faster in the first than the second and can be corrected spontaneously during the growth9: indeed, in our patient, the extensive involvement of the spine resulted just in a minimal degree of kyphosis.

Tubercular dactylitis is another uncommon form of extrapulmonary TB involving small bones of the hand or the foot, with the first more affected than the second one. The most common involved sites are the proximal phalanx of the index and the middle finger as well as the metacarpals of the middle and the ring finger.10 Among children affected by TB, its incidence is estimated to be 0.65–6.9%, and about 85% of patients are younger than 6 years.8 In this population, the hematopoietic marrow in the short tubular bones represents a fertile ground for the mycobacterial seeding.7 The classical clinical onset is a subacute painless finger swelling of a few months’ duration which can be overlooked by the parents and lead to diagnostic delay.11 Although MR imaging can demonstrate earlier bone marrow and soft tissue involvement, hand radiography is the first-line imaging modality and can show soft tissue swelling, presence of diffuse osteopenia, lytic lesions of the bone, and ballooning out of the remaining bone (the appearance termed “spina ventosa” or “wind-filled sail”).10 The differential diagnoses of tuberculous dactylitis include congenital syphilitic dactylitis (especially in children younger than 2 years), pyogenic or fungal infection, sarcoid dactylitis, trauma, sickle cell disease, enchondroma, hemangioma, giant cell tumor, sarcoma, chondromyxoid fibroma, fibrous dysplasia, neuroblastoma, leukemia, and hyperparathyroidism.12 In our case, hand bones infection was crucial to make final diagnosis because of the accessibility of the site for a biopsy.

In conclusion, multifocal tuberculous osteomyelitis is a rare disease that can be associated with severe complications and requires a multidisciplinary approach involving an infectious diseases specialist, microbiologist, orthopedic surgeon, vertebral surgeon, and radiologist. Clinical and radiological features are not specific enough to distinguish from malignancies and may often lead to diagnostic mistakes. Histological and microbiological examinations are essential to confirm a diagnostic suspicion. Therefore, even in immunocompetent patients from low prevalence countries, TB should be ever considered to make an early diagnosis and improve the prognosis of the patients.