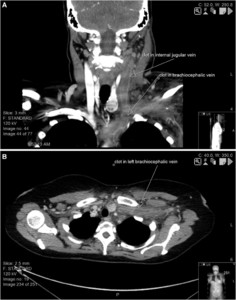 We report two unusual cases of clinical strongyloidiasis that present as extensive thrombosis: a case of hyperinfection with concurrent eosinophilia and a case of disseminated infection as a complication of immunosuppression. We discuss risk factors for the development of Strongyloides stercoralis infection and thromboembolism, and the recommended management.

Strongyloides stercoralis is a nematode found mainly in tropical and subtropical areas and is thought to infect 30–100 million people worldwide.1 Strongyloides stercoralis is a distinctive helminthic parasite because of its ability to autoinfect its host with the potential to proliferate, causing significant worm burden while remaining in the host indefinitely. It will often remain dormant and asymptomatic until a decrement in cellular immunity occurs, such as due to immunosuppressive therapy or disease, and thereafter may cause disseminated infection.2 Strongyloidiasis incites the proinflammatory cascade and may cause high peripheral eosinophilia. We report two cases of patients with strongyloidiasis who presented with aggressive thrombotic events, a complication that has rarely been described previously. These cases highlight the importance of having a high index of suspicion for infection, particularly in an at-risk population from endemic regions and in those undergoing immunosuppressive therapy.

A 44-year-old woman was admitted to the general medical service with a 1-week history of abdominal pain, non-bloody diarrhea, and subsequent fever, anorexia, and left-sided neck and arm pain. Her past medical history was noncontributory, and she was on no medications. She was born in rural Cuba and moved to Canada ten years before admission. She had visited Cuba three weeks preceding the onset of her illness. On examination, the patient was afebrile and normotensive. Physical examination was remarkable for fullness and pain in the left neck and upper arm.

She was treated with a 2-week course of albendazole and ivermectin, and anticoagulated with rivaroxaban. Her pain and swelling improved with this therapy. The hematology service did not feel a thrombophilia workup was warranted. She was discharged with hematology and infectious disease follow-up, where she continued to improve.

A previously healthy 49-year-old woman, who was born in the Philippines, presented to the hematology service with a several month history of fatigue and exercise intolerance. She denied any constitutional symptoms, and her review of systems was negative.

Investigations demonstrated severe normocytic anemia with a hemoglobin count of 68 g/L (RR 120–155). The remainder of her blood count parameters, including white blood cells and platelets, was within normal limits. She underwent a bone marrow biopsy which revealed pathology consistent with pure red cell aplasia (PRCA). Imaging showed a mediastinal mass suggestive of a thymoma consistent with PRCA.

She underwent surgical resection of the mass that was confirmed pathologically as a thymoma. She remained transfusion dependant for 6 weeks postoperatively at which time the hematology service elected to initiate immunosuppressive therapy for PRCA with prednisone 1 mg/kg.

She was admitted to the general medicine service three weeks into her prednisone course with fever, nausea, vomiting, and abdominal pain. CT imaging of the abdomen demonstrated ileocolitis, following which she was empirically initiated on antibiotics for a presumed infectious etiology. Repeat CT imaging demonstrated extensive thrombosis of the abdominal aorta. Her coagulation studies, including INR and PTT, were in the normal range. Despite initiation of therapeutic anticoagulation with enoxaparin, she continued to deteriorate clinically, requiring intensive care unit admission. CT imaging showed progression of the thrombus to involve the portal vein and the right renal vein. Later into the admission, further propagation of the thrombus occurred with involvement of the right basal segmental pulmonary artery.

The two reported cases illustrate the role of systemic infection and inflammation in thrombogenesis. Although the cases differed in their development of clinical strongyloidiasis—the former as a hyperinfection with concurrent eosinophilia and the latter as a case of disseminated infection as a complication of immunosuppression—we believe that the shared degree of systemic inflammation caused by S. stercoralis infection likely contributed to extensive thrombosis.

Both cases exhibit common epidemiological risk factors for S. stercoralis infection. Transmission mainly occurs in tropical, subtropical, and temperate areas, including Africa, Asia, and Central and South America. Prevalence rates are higher in rural, low-resource, or agricultural areas where fecal contamination of soil occurs.3 The patients we reported were both from high-risk countries (Cuba and the Philippines).

Strongyloides stercoralisis a nematode (roundworm) with the unique potential to autoinfect human hosts. The rhabditiform larvae in the upper small bowel can bypass the normal lifecycle and become infective filariform larvae that penetrate the large intestine or skin, causing a hyper- or disseminated infection.2 Autoinfection explains how infections can persist for years after individuals have migrated from endemic areas, as in our cases where both had lived in Canada for several years. Clinical risk factors for strongyloides hyperinfection include HTLV-1 infection, chronic alcohol use, malignancy, and immunocompromised state.3 After impairment of cellular immunity, hyperinfection involves acceleration of pulmonary and gastrointestinal proliferation; dissemination occurs when the larvae distantly migrate after overwhelming the pulmonary or gastrointestinal systems. Immunosuppressive therapy, principally corticosteroids or immunomodulation in transplant patients, is the key risk factor for this process.2

Many of these risk factors are common to those of thrombosis. Coagulation can be simplified in a cell surface–based model that is initiated with exposed endothelial tissue factor and activated platelets, followed by amplification of coagulation factor activation after which propagation of thrombin and fibrin generation leads to clot formation.4 Inflammation involves eicosanoid and cytokine release by infected or damaged cells to propagate white blood cell and chemokine response. On a molecular level, inflammatory proteins have been implicated in the production of thrombosis. C-reactive peptide modulates platelet function and enhances amplification of coagulation factors. Interleukin-6 stimulates the expression of the prothrombotic tissue factor, fibrinogen, and von Willebrand factor.4,5 In a clinical context, acute infectious illness confers a two-fold increased risk of developing venous thrombosis.5

Corticosteroid use may have been an additional risk factor for thrombosis. Glucocorticoids not only lower some procoagulant factors, including fibrinogen and the von Willebrand factor, but they may also impair fibrinolysis.6 A nationwide population-based case–control study in Denmark demonstrated a 3-fold increase in venous thromboembolism risk after 90 days of systemic glucocorticoid therapy.7 Although this outcome has been noted in other epidemiological studies,8 results may be confounded by chronic severe inflammatory disorders for which the glucocorticoids are prescribed.6

Although the literature is limited, patients with peripheral blood eosinophilia may be predisposed to thrombotic events. In hypereosinophilia syndrome, about 25% of patients develop thrombotic events with a 5–10% associated mortality.9 In patients with very high eosinophilia associated with parasitoses specifically, about 70% had arterial thromboses and 30% had venous thromboses.10 Vascular occlusion, particularly in nematode infections, may occur locally because of tissue parasitism in small vessels. Certain parasitic infections incite eosinophil upregulation of prothrombotic surface molecules and degranulation and secretion of inflammatory factors that may predispose to thrombosis distant from the site of parasitized tissue.11

On literature review, the described mechanisms may have contributed to the other reported cases of strongyloides-associated thromboses: biliary strongyloidiasis causing local parasitism and portal vein thrombosis,12 and left ventricular thrombus related to endomyocardial fibrosis due to high eosinophilia and S. stercoralis hyperinfection.13

Management of S. stercoralis hyperinfection or moderate risk infection (i.e., more severe than simple intestinal strongyloidiasis) involves dual therapy with ivermectin 200 mcg/kg/day oral (or subcutaneous) for 1–2 days and albendazole 400 mg orally twice daily for 7 days in mild hyperinfection, or until clinical improvement in severe disseminated infection where empiric broad-spectrum antibiotics may be indicated to cover for polymicrobial sepsis.1 Therapeutic anticoagulation for the provoked thrombotic events would entail 3 months of anticoagulation from the time of parasite eradication.13

Both of these cases demonstrated hypercoagulability associated with the inflammatory cascade and strongyloidiasis; this phenomenon has rarely been described in the literature. Although both clinical scenarios varied in their presentations and mechanism of their thrombotic episode, there is a common thread of infection, inflammation, and thrombosis related to this invasive parasite.