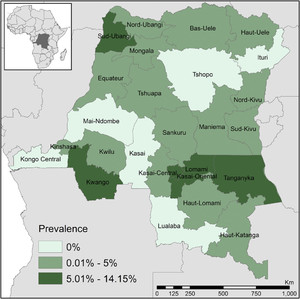 Seroepidemiology of Hepatitis B in the Democratic Republic of the Congo

Hepatitis B virus (HBV) is endemic throughout Africa, but its prevalence in the Democratic Republic of the Congo (DRC) is incompletely understood. We used dried blood spot (DBS) samples from the 2013 to 2014 Demographic and Health Survey in the DRC to measure the prevalence of HBV using the Abbott ARCHITECT HBV surface antigen (HBsAg) qualitative assay. We then attempted to sequence and genotype HBsAg-positive samples. The weighted national prevalence of HBV was 3.3% (95% CI: 1.8–4.7%), with a prevalence of 2.2% (95% CI: 0.3–4.1%) among children. Hepatitis B virus cases occurred countrywide and across age strata. Genotype E predominated (60%), and we found a unique cluster of genotype A isolates (30%). In conclusion, DBS-based HBsAg testing from a nationally representative survey found that HBV is common and widely distributed among Congolese adults and children. The distribution of cases across ages suggests ongoing transmission and underscores the need for additional interventions to prevent HBV infection.

Hepatitis B virus (HBV) is highly endemic in sub-Saharan Africa,1 but the prevalence of this infection has not been fully characterized in countries such as the Democratic Republic of the Congo (DRC). A recent study among patients with acute febrile jaundice suspected to have yellow fever in the DRC found an HBV seroprevalence of 24.6% among patients with acute febrile jaundice.2 Among blood donors in the neighboring Republic of Congo, HBV surface antigen (HBsAg) carriage rates approached 11%.3 Hepatitis B virus phylogenetic studies conducted in the DRC have noted a predominance of genotypes A and E.4 These findings are consistent with the “East–West divide” that has been described throughout sub-Saharan Africa, with genotype A being predominant in eastern regions and genotype E being predominant in western regions.4–6

Dried blood spot (DBS) sampling is an efficient and reliable means for the diagnosis of hepatitis viruses in low-resource settings.7–11 The benefits of DBS over venous blood sampling are manifold, including the ease of obtaining finger-prick specimens, the lack of a cold chain requirement, simplification of transport and storage, and the ease of integration into existing specimen transport networks.8,10,12 Dried blood spot samples are often collected in the DRC and other sub-Saharan African countries as part of national health surveys to inform research on infectious diseases such as HIV and malaria, but testing for hepatitis viruses is not routinely performed. These DBS samples represent an opportunity for estimating HBV prevalence on a national scale, rather than in selected patient populations or within a single city or region of a country.

In this study, we used existing DBS samples collected during the 2013–2014 Demographic and Health Survey (DHS) to determine the prevalence of HBV among adults and children living in the DRC. We further characterized the epidemiology of HBV in the DRC by genotyping HBsAg-positive samples.

This is a secondary analysis conducted on samples obtained during the 2013–2014 DHS in the DRC. Briefly, 27,483 adults (ages 15–59 years) and 9,369 children (ages 0–5 years) in 18,171 households were surveyed from 540 survey clusters as part of a nationally representative survey. Survey clusters are chosen via a multistage survey design that first stratifies by province in the DRC and then further selects from rural and urban areas within provinces to generate a sample that is nationally, regionally, and residentially (rural/urban) representative. Both individuals and households are weighted by the DHS to account for differences in the probability of selection and interview and for inclusion in biomarker collection. Specific survey methodology is elaborated further in the 2013–2014 DRC DHS’s final report.13 Here, we selected 980 samples at random, oversampling children 2:1 relative to the age distribution structure in the DRC.14

Dried blood spots were collected according to the DHS protocol as previously described.8 In brief, whole blood obtained via finger prick was spotted onto Whatmann filter paper and allowed to dry at room temperature. Filter papers were then stored with dessicant and transported back to the National AIDS Control Program Laboratory in Kinshasa, where they were stored at −80°C. Filter papers for children and individual 6-mm punches for adults were transported to the University of North Carolina (UNC), where they were stored at −80°C until further sample processing. Dried blood spot samples were tested using the ARCHITECT HBsAg qualitative assay (Abbott Laboratories, Abbott Park, IL) as described in the Supplemental Material.

Statistical analyses were carried out using SAS 9.4 software (SAS Institute, Cary, NC).15 We calculated the national and provincial prevalence of HBV using sample weights determined by the DHS to account for complex survey design.16 Ninety-five percent CIs were calculated for all prevalence estimates. We mapped HBV prevalence by province using ArcGIS version 10.4 (ESRI, Redlands, CA)17 and analyzed provincial prevalence estimates for global and local spatial clustering with the Moran I and Getis-Ord Gi* statistics. We used logistic regression modeling to test hypotheses and to calculate Wald P-values. Hypothesized covariates included age, gender, wealth, rural/urban residence, prior vaccination history, HIV status, jaundice, and anemia. Wealth was assessed using the DHS wealth index, which is a composite measure of a household’s standard of living calculated based on ownership of specific assets, the type of housing construction, and the type of available water and sanitation services (if any). Scores were determined using a standardized DHS algorithm13 and correspond to quintiles ranging from one (poorest) to five (richest). This study was approved by Institutional Review Boards at Kinshasa School of Public Health and the University of North Carolina.

Spatial analyses confirmed that HBV is widely distributed throughout the DRC (Figure 1). Neither a Moran’s I nor a Getis-Ord Gi* testing for spatial autocorrelation indicated significant clustering or hot spots. Baseline characteristics of HBV-positive and HBV-negative adults and children are shown in Table 1.

* All summary statistics are weighted to account for the complex survey design. Sample sizes (n) are unweighted. Percentages represent weighted proportions of subjects with the specified characteristics.

† Defined as Hgb ≤ 7 g/dL. Data only available for adult women and children. We included anemia in the risk factor analysis because of its potential association with an increased likelihood of having received a blood transfusion, which carries a risk for HBV infection.

Of the 39 HBsAg-positive samples, we could only successfully amplify and sequence DNA using leftover eluant from 10 DBS samples (two of 30 adults and eight of nine children). Phylogenetic analysis revealed a predominance of genotype E (60%) and A isolates (40%), including a cluster of genotype A isolates that were distinct from other subgenotypes (Supplemental Figure 3A). Genotype A and E isolates were observed in multiple regions, without obvious clustering by geography (Supplemental Figure 3B).

OR = odds ratio. Adjusted OR inclusive of vaccination status and wealth status as well as age of the child.

This study using DBS from a nationally representative survey demonstrated an overall prevalence of HBV of 3.3%. Although not reaching statistical significance, the trend toward higher prevalence among adults than children suggests that both vertical (mother-to-child) and horizontal (within households or communities) transmissions are occurring in the DRC. Dried blood spot sampling is a promising technique for the enhanced identification and management of HBV in remote and/or low-resource areas. Using the Abbott ARCHITECT HBsAg qualitative assay on DBS from the DRC, our study builds on the growing body of the literature that reveals the effectiveness of DBS for serological diagnoses.10,11 With a simple sampling methodology, it is now feasible to screen individuals efficiently as part of large, population-based surveys to define the epidemiological patterns of hepatitides.8,12

Our findings also provide insight into the distribution of HBV genotypes in Central Africa. Similar to other analyses conducted in sub-Saharan Africa,3–6,18 our phylogenetic analysis isolated genotypes A and E among HBsAg-positive samples. We also identified three unique genotype A sequences from the western provinces, although the lack of full-length genome sequences prevents us from determining whether they represent a novel subgenotype.19 In contrast to the previously described East–West divide of genotype A in eastern Africa and genotype E in western regions,4,6 we did not observe obvious geographical clustering of genotypes in the DRC (Supplemental Figure 3). These conclusions are limited by our small sample size of sequenced variants. Additional studies are needed to definitively characterize this phenomenon.

The strengths of this study include the use of existing DBS samples from a nationally representative survey to determine the burden of HBV in the DRC. Despite a large overall sample size, the precision of provincial HBV prevalence estimates and assessment of HBV genotype distribution were limited by small sample sizes at the province level. In addition, the number of HBsAg-positive isolates limited our statistical power to identify risk factors for and spatial clustering of HBV infection. We did not have enough sample volume to evaluate HBsAg+ samples for HBV “e” antigen or antibody, but will include these in future studies. Finally, with no HIV–HBV coinfected individuals in this cohort, we were not able to evaluate risk factors for infection in this population. However, the prevalence of HIV among Congolese adults is low (0.8%), and HIV–HBV coinfected individuals are expected to represent a minority of HBV infections.20

Hepatitis B virus and other forms of viral hepatitis are beginning to receive deserved attention in the African region. To achieve the WHO’s goal of 90% reduction in chronic HBV cases by 2030,1 we must build on available resources to improve diagnostic capabilities in low-resource settings, treatment of chronic HBV, and prevention in the form of improved HBV vaccination strategies. Future research is necessary to elucidate transmission patterns of HBV in the DRC so that appropriate public health interventions can be implemented. Only with a comprehensive approach can the hepatitis B epidemic be adequately addressed in sub-Saharan Africa.