(A) CT angiogram obtained on admission. The volume-rendered image shows an aneurysm of 10-mm size with its feeding artery arising from a branch of the right hepatic artery (arrow). (B) The axial CT image in the venous phase shows multiple hepatic abscesses, including the largest abscess in the right lobe showing a pseudoaneurysm peripherally within the cavity (arrow). The hyperdense areas surrounding the aneurysm represent fresh blood clots. (C) The coronal CT image shows an ill-defined breach in the abscess cavity superiorly (arrow), with small subphrenic fluid collection (double arrow) suggesting a contained rupture.

CT angiogram obtained 1 week after the procedure. The volume-rendered image shows complete disappearance of the aneurysm and its feeding artery. 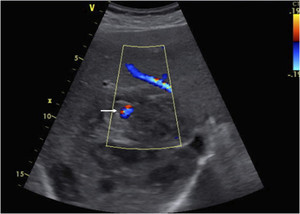 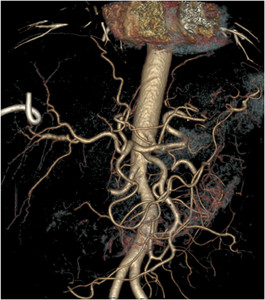 Intrahepatic pseudoaneurysm (IHPA) is generally iatrogenic, and it warrants urgent management because of its reportedly significant risk of rupture leading to considerable mortality. Intrahepatic pseudoaneurysm caused by amebic liver abscess (ALA) is exceedingly rare with fewer than seven published reports. All reported symptomatic cases have been treated with hepatic artery embolization; therefore, little is known about its natural course and effect of abscess drainage on its outcome. We report the first case of symptomatic intracavitary IHPA caused by ALA in which ultrasound-guided percutaneous catheter drainage of the abscess resulted in the spontaneous resolution of the IHPA.

Intrahepatic pseudoaneurysm (IHPA) is rare, accounting for less than 5% of all hepatic artery aneurysms and is mostly iatrogenic, resulting from hepatobiliary interventions.1–4 It usually causes hemobilia, and the patient typically presents with melena or hematemesis, which is considered a life-threatening condition. Because of the reported risk of rupture as high as 76% and mortality approaching 20%, it is recommended that all symptomatic IHPAs be treated early.4

Intrahepatic pseudoaneurysm caused by amebic liver abscess (ALA) is even rarer with few published case reports.5–9 Under the assumption that it ruptures just as iatrogenic cases if not appropriately treated early, all reported symptomatic IHPAs caused by ALA have been managed with hepatic artery embolization. The natural course of such aneurysm, however, is unknown. It also remains uncertain whether the abscess with intracavitary aneurysm should be drained because of fear of rupture following percutaneous drainage (PCD). We report the first case of a symptomatic intracavitary IHPA caused by ALA in which ultrasound (US)-guided PCD of the abscess resulted in the spontaneous resolution of the IHPA.

A 52-year-old man was admitted to our hospital with a 20-day history of fever and severe pain in the right hypochondrium. He had multiple episodes of melena for 2 weeks. One week before this admission, the patient was seen by a gastroenterologist at another hospital and was diagnosed for ALA for which oral antiamebic was initiated. Upper gastrointestinal endoscopy performed at the same hospital had revealed blood clots at the papilla of Vater, confirming the hemobilia. There was no history of prior percutaneous liver procedures. He had been an alcohol abuser for many years. Laboratory tests on admission at our institute showed a white blood cell count of 21,900/μL, hemoglobin of 7.1 g/dL, total bilirubin of 1.3 mg/dL, serum albumin of 1.9 g/dL, aspartate aminotransferase of 189 U/L, alanine aminotransferase of 262 U/L, and alkaline phosphatase of 409 U/L. Amebic serology by ELISA was positive. The US showed three abscess cavities with partially liquefied necrotic tissues and debris in the right lobe of the liver; the largest was 560 mL in volume (Figure 1). A small hypoechoic cystic lesion showing arterial blood flow suggestive of aneurysm was noted within the largest cavity. Computed tomography (CT) angiogram confirmed the presence of an aneurysm of 10-mm size arising from the right hepatic artery and located peripherally within the abscess cavity. The cavity also showed evidence of blood clots and an ill-defined breach in the cavity superiorly with approximately 50-mL fluid collection in the subphrenic region, suggesting a contained rupture (Figure 2).

The patient was hemodynamically stable on admission. We performed US-guided PCD for the largest abscess and scheduled the hepatic artery embolization to treat the aneurysm for the next day. Approximately 300-mL anchovy sauce–like fluid–containing pus flakes and blood clots were drained with a 10F catheter. The fluid sample was found to be bacteriologically sterile on culture. Most of the symptoms including fever, pain, and melena resolved within 1 day after the procedure. On follow-up US after 2 days, the aneurysm was found to be partially thrombosed, with echogenic thrombus replacing the aneurysm. During the 7-day hospital stay, the patient remained clinically asymptomatic and hemodynamically stable. A repeat CT angiogram (Figure 3) after 1 week did not depict the aneurysm or its feeding artery. The bilious drain output, however, remained as high as 100 mL per day, suggesting an abscess–biliary communication. The patient was discharged with a catheter in situ, which was removed on the 20th post-procedural day after the drain output ceased almost completely.

Amebic liver abscess, a parasitic infection caused by Entamoeba histolytica, is a common health problem in developing countries where amebiasis is endemic. The amebic abscess consists principally of liquefied necrotic liver tissue resulting from lysis and destruction of the hepatic parenchyma by the amebic trophozoites.10 On rare occasion, the destruction of the arterial wall may cause formation of an IHPA.

Unlike the iatrogenic aneurysm that usually directly erodes with the biliary tree causing life-threatening hemobilia and high mortality, an IHPA from abscess may decompress into the abscess cavity, which in turn may communicate with biliary ducts causing hemobilia.3 This explains the abscess-related IHPA causing mild to moderate hemobilia and less severe hemodynamic instability compared with the iatrogenic cases.

The liver has a remarkable capacity to regenerate. It has been observed that communication between intrahepatic biliary ducts and amebic abscess almost always heals spontaneously as the abscess is treated effectively by PCD.11 Similarly, a small aneurysm from amebic abscess tends to resolve as the abscess is promptly treated. Tacconi et al.9 reported an IHPA of 1.5-cm size secondary to ALA which remained asymptomatic during treatment and resolved spontaneously when the abscess was managed with combined medical therapy and needle aspiration. Because the presence of necrotic material, bile, and blood clots prevents healing of the abscess cavity, draining these materials with the catheter allows the cavity to resolve quickly.3

Although medical treatment with antiamebic is highly effective in managing ALA, the ruptured abscesses often require US-guided PCD, which can be a challenging task for an interventional radiologist in the presence of an intracavitary aneurysm. It follows logically that decompression of the abscess cavity and removal of blood clot by PCD may reduce its tamponading effect and trigger rupture of the aneurysm, but our case does not support this argument. In this case, not only the aneurysm but also the entire segment of the feeding artery thrombosed when the abscess was drained using a percutaneous catheter. The small size of the pseudoaneurysm may be an important factor that contributed to the spontaneous resolution of the lesion. The mean size of previously reported hepatic pseudoaneurysm is approximately 20 mm compared with 10 mm reported herein.4

The treatment options for hepatic artery pseudoaneurysm include surgical resection, endovascular embolization, and careful observation. Because surgical treatment often involves resection of affected segments of the liver causing substantial morbidity, endovascular embolization has now become the first line of treatment for intrahepatic aneurysm. However, it involves considerable cost of treatment, risk of liver ischemia, and possibility of technical failure with overall morbidity approaching 25%.2 Although some authors have recommended that small (< 20 mm) hepatic artery aneurysm be observed, most still believe that intrahepatic aneurysms of any size may rupture and, therefore, should be treated early, regardless of their size.2,4,12 Because of the rarity and limited information available on this entity, a clear consensus about its optimal management has not yet been formed.

In this context, the presented case provides a valuable insight into the understanding of the natural course of IHPAs secondary to ALA and the effect of medical treatment assisted by catheter drainage on its outcome. Based on this case, certain parameters that seem to predict which patient would respond to conservative approach are as follows: size and location of the aneurysm, clinical status and hemodynamic stability of the patient, and clinical and radiological response to therapy. The aneurysm size is the key parameter that influences its spontaneous resolution; an IHPA smaller than 2 cm arising from the peripheral branch of the hepatic artery is more likely to resolve spontaneously. Hemodynamic stability of the patient at presentation and during treatment is another factor favoring the conservative approach; in this case, none of the prior episodes of bleeding were life-threatening. Last, Doppler sonographic demonstration of progressive thrombosis of IHPAs and resolution of the abscess provide a rational basis for electing and adhering to this approach.