Directions for handwashing provided to participants in both rounds of laboratory testing.

Mean log10 reduction factor of Escherichia coli after volunteers washed their hands with either the SuperTowel prototypes or the reference product (non-medicated soap). (Left side, phase 1 experiment, *P = 0.018. Right side, phase 2 experiment, **P < 0.005). 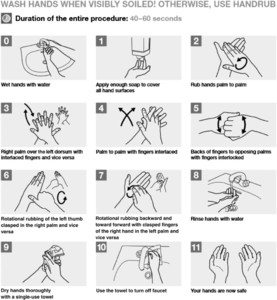 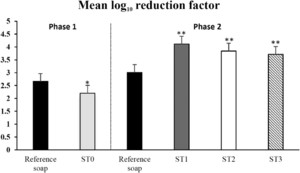 Efficacy of the SuperTowel®: An Alternative Hand-washing Product for Humanitarian Emergencies

Handwashing with soap reduces the transmission of diarrheal pathogens, but access to hand-washing facilities, water, and soap in humanitarian emergencies is limited. The SuperTowel® (ST) is a fabric treated with permanent antimicrobial bonding and has been designed as a soap alternative in emergency situations. The aim of this study was to test the efficacy of the ST as a hand-cleaning product. Two sets of laboratory tests, with 16 volunteers in each, were conducted to test the efficacy of different prototypes of the ST. Volunteers pre-contaminated their hands with nonpathogenic Escherichia coli. Comparisons were made between hand cleaning with the ST and handwashing with the reference soap, using a crossover design. Participants also completed a questionnaire about product perceptions. Three of the prototypes of the ST were more efficacious at removing E. coli from pre-contaminated hands than handwashing with soap (mean log10 reduction of 4.11 ± 0.47 for ST1, 3.84 ± 0.61 for ST2, and 3.71 ± 0.67 for ST3 versus 3.01 ± 0.63 for soap [P < 0.001, P = 0.002, and P = 0.005, respectively]). The ST prototypes used less water than handwashing with soap, were well accepted, and were considered preferable in communal settings. The ST has the potential to be a suitable complementary hand-cleaning product for humanitarian emergencies.