Full-genome maximum clade credibility tree of the chikungunya virus East, Central, and South African lineage. Estimated location origin is marked in colored tree background, according to the legend. Taxa in red text represent genomes containing the Aedes albopictus–adaptive E1:A226V mutation, whereas all other taxa contain the wild type. Taxa in blue (light blue for Kenya) represent genomes with the E1:K211E and E2:V264A mutations, previously associated with increased fitness in Aedes aegypti. Most important node supports are shown, as well as the estimated times of the most recent common ancestors (TMRCAs) for nodes of interest. Ancestral amino acid states (A and V) at position E1:226 are plotted on the nodes to illustrate evolutionary paths of the Aedes albopictus and Ae. aegypti mutation variants. 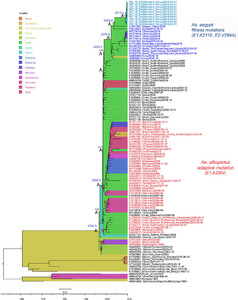 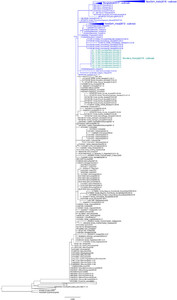 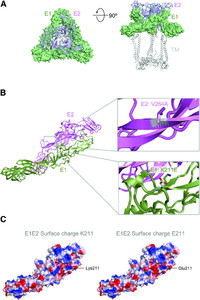 Global Outbreaks and Origins of a Chikungunya Virus Variant Carrying Mutations Which May Increase Fitness for Aedes aegypti: Revelations from the 2016 Mandera, Kenya Outbreak

In 2016, a chikungunya virus (CHIKV) outbreak was reported in Mandera, Kenya. This was the first major CHIKV outbreak in the country since the global reemergence of this virus in Kenya in 2004. We collected samples and sequenced viral genomes from this outbreak. All Kenyan genomes contained two mutations, E1:K211E and E2:V264A, recently reported to have an association with increased infectivity, dissemination, and transmission in the Aedes aegypti vector. Phylogeographic inference of temporal and spatial virus relationships showed that this variant emerged within the East, Central, and South African lineage between 2005 and 2008, most probably in India. It was also in India where the first large outbreak caused by this virus appeared, in New Delhi, 2010. More importantly, our results also showed that this variant is no longer contained to India. We found it present in several major outbreaks, including the 2016 outbreaks in Pakistan and Kenya, and the 2017 outbreak in Bangladesh. Thus, this variant may have a capability of driving large CHIKV outbreaks in different regions of the world. Our results point to the importance of continued genomic-based surveillance and prompt urgent vector competence studies to assess the level of vector susceptibility and virus transmission, and the impact this might have on this variant’s epidemic potential and global spread.