Kyoto Encyclopedia of Genes and Genomes (KEGG) analysis of the top 25 pathways is shown. The x axis shows pathways from KEGG classification and the y axis shows the number of genes.

Heatmap analysis showing the expression pattern of differentially expressed genes in different strains. Log10 (reads per kilobase of exon model per million reads + 1) values are used for clustering. Intensity of color indicates expression levels, with genes of high expression in blue and low expression in red. 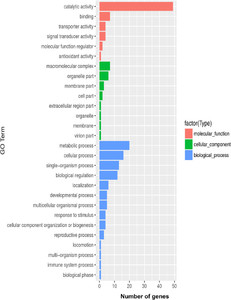 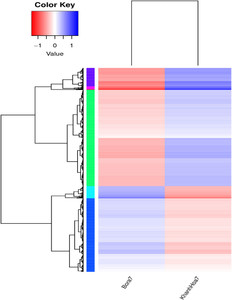 The mosquito Aedes aegypti is a transmission vector for dangerous epidemic diseases in humans. Insecticides have been used as the most general vector control method in the world. However, Ae. aegypti have developed many resistant mechanisms such as reduced neuronal sensitivity to insecticides (target-site resistance), enhanced insecticide metabolism (metabolic resistance), altered transport, sequestration, and other mechanisms. It has become a major problem for vector control programs. Transcriptome sequencing and bioinformatic analysis were used to compare transcription levels between a susceptible strain (Bora7) and a resistant strain (KhanhHoa7) collected from the field. A total of 161 million Illumina reads, including 66,076,678 reads from the Bora7 strain and 69,606,654 reads from the KhanhHoa7 strain, were generated and assembled into 11,174 genes. A comparison of the KhanhHoa7 transcriptome to that of Bora7 showed 672 upregulated genes and 488 downregulated genes. We identified the highly upregulated genes: cytochrome P450 4C1, 4C3, 4C21, 4D1, 4D1 isoform X2, 4D2, 4D2 isoform X2, 4G15, 6A2, 6A8, 6D3, and 9E2; Glutathione S transferase (GST1), UGT1-3, 1-7, 2B15, and 2B37; binding cassette transporter (ABC) transporter F family member 4 and ABC transporter G family member 20. Interestingly, there was a significant increase in the expression of the genes such as CYP9E2 (8.3-fold), CYP6A8 (5.9-fold), CYP6D3 (5.4-fold), CYP4C21 (5.4-fold), CYP4G15 (5.2-fold), GST1 (3.5-fold), and ABC transporter 4 (2.1-fold). Our results suggested a potential relationship between the expression of the genes in metabolic processes and insecticide resistance in the studied strain. These results may contribute to the understanding of the mechanisms of insecticide resistance in Ae. aegypti.