(A) Viremia profile (mean and standard deviation) for West Nile virus (WNV) and St. Louis encephalitis virus (SLEV) detected in chicks subcutaneously inoculated. (B) Timeline for transmission experiments carried out on this research. The gray box shows that tick feeding occurred during the peak of viremia of the chicks. DPI = days postinoculation.

Diagram illustrating the sequence of experimental procedures with larvae, nymphs, and adults of each of the three species of ticks in the present study. SLEV = St. Louis encephalitis virus; WNV = West Nile virus. 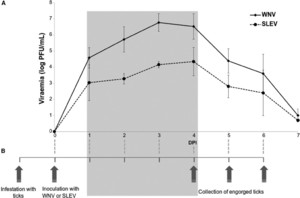 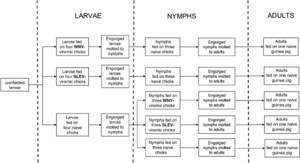 Many species of Amblyomma ticks are commonly found infesting wild birds in South America, where birds are important hosts for several arboviruses, such as West Nile virus (WNV) and St. Louis encephalitis virus (SLEV). In this study, WNV and SLEV transmission experiments were performed to evaluate the vector competence of three South American tick species: Amblyomma ovale, Amblyomma tigrinum, and Amblyomma tonelliae. Larval and nymphal ticks of each species were allowed to feed on chicks needle inoculated with WNV or SLEV. All three Amblyomma species acquired either WNV or SLEV through larval feeding, with infection rates varying from 3.1% to 100% for WNV and from 0% to 35.7% for SLEV in engorged larvae. Transstadial perpetuation of the viruses was demonstrated in the molted nymphs, with WNV infection rates varying from 0% to 33.7% and SLEV infection rates from 13.6% to 23.8%. Although nymphal ticks also acquired either virus through feeding, transstadial perpetuation to adult ticks was lower, with virus detection in only 3.2% of A. tigrinum and 11.5% of A. tonelliae unfed adult ticks. On the other hand, vector competence for nymphs (exposed to WNV or SLEV through larval feeding) and adult ticks (exposed to WNV or SLEV through larval or nymphal feeding) was null in all cases. Although our results indicate transstadial perpetuation of WNV or SLEV in the three tick species, the ticks were not competent to transmit these agents to susceptible hosts. The role of these ixodid tick species in the epidemiology of WNV and SLEV might be insignificant, even though at least A. ovale and A. tigrinum are frequent bird ticks in Latin America, so the virus could survive winter in the fed larvae. However, future studies are required to determine the implications that this could have, as well as analyze the vector competence of other common bird tick species in South America.