Comparing reported and surveyed coverage by year in 60 districts of Cameroon (2004–2011).

Comparing reported and surveyed coverage by year in 38 districts of Uganda (2003–2011). 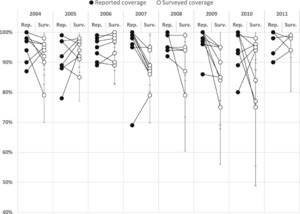 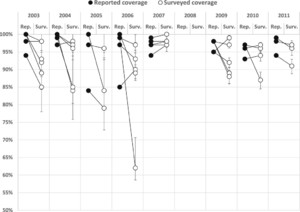 Mass drug administration (MDA) with ivermectin must reach a high treatment coverage (90% of the eligible population) if onchocerciasis is to be eliminated. Questions have been raised as to whether reported treatment figures reaching such high coverage are reliable. Sample surveys are proposed as the method of choice for “validating” reported coverage figures. The purpose of this study was to compare the district-level MDA coverage reported by programs with contemporaneous surveys of randomly selected respondents living in those same districts. Over an 8-year period, 19,219 households were selected using multistage random sampling; 38,433 adult male and female heads of those households were asked about their recent ivermectin MDA treatment experience. District coverage reports were considered “accurate” if they fell within the 95% CIs determined by the corresponding district’s survey. Ninety-eight treatment rounds were evaluated over an 8-year period. Overall, the reported coverage of 96.5% (range: 68–100%) was significantly higher than the 92.5% surveyed coverage (range: 62.1–99.6%, 95% CI: 91.9–93.2%). However, only 20% of districts reported significantly higher coverage than surveys, 68% of district program reports were judged as accurate, and 12% of districts reported significantly lower coverage figures than their corresponding surveys. Eighty-eight percent of districts reported coverage ≥ 90% threshold for success, compared with 97% of surveys that included 90% in their 95% CIs. We conclude that when analyzed statistically at the district level, most surveys verified the reported coverage.