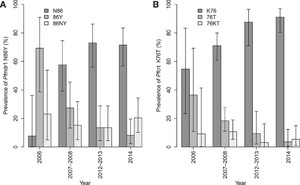 Artemisinin-based combination therapy (ACT) is the mainstay treatment for uncomplicated Plasmodium falciparum malaria globally.1 Artemisinin-based combination therapy consists of fast-acting artemisinin derivatives and a long-acting partner drug with a different mode of action. Initially, artemisinin rapidly clears a large number of asexual parasites before the long-acting partner drug eliminates the residual parasitemia.2 For artemisinin-sensitive P. falciparum parasites, microscopy-determined parasite clearance usually occurs within 48 hours in most of the patients treated with ACT.3 Artemisinin-resistant P. falciparum parasites, on the other hand, are phenotypically characterized by a slow clearance rate.4 Microscopy-based P. falciparum positivity rate on day 3 after initiation of ACT treatment is considered an important determinant of delayed parasite clearance, and if the positivity rate exceeds 10%, this is considered an alert for artemisinin resistance.5 The resistance has been linked to polymorphisms in the Kelch gene located on chromosome 13 (k13) of P. falciparum parasites.6

Artemisinin resistance has been reported from four countries in the Mekong region, Southeast Asia.4,7,8 In Africa, despite recent case reports of suspected resistance,9,10 Pfk13 polymorphisms are rare and do not include those previously described and associated with delayed P. falciparum clearance in Southeast Asia.11,12 Artemisinin-based combination therapy has also remained highly efficacious in Africa, with rapid microscopy-determined clearance of the asexual parasites within 48 hours after initiation of treatment.13–15 However, few African studies have assessed the presence of residual polymerase chain reaction (PCR)-determined P. falciparum positivity on day 3 after initiation of ACT treatment,16,17 a phenomenon that may indicate reduced susceptibility of P. falciparum against artemisinin derivatives and thereby a potential early warning marker of artemisinin resistance.16

Nonetheless, several pretreatment host and parasite characteristics including initial parasite density, age of the patient, and hemoglobin level influence parasite clearance after treatment with ACT.18–20 Higher initial microscopy-determined asexual parasitemia (≥ 100,000 parasites/µL of blood) and anemia, that is hemoglobin < 10 g/dL, are associated with slow parasite clearance.19,21 Conversely, in high malaria-endemic areas, malaria immunity increases with age, whereby children aged < 5 years have low acquired immunity against P. falciparum infection and are, therefore, prone to slower parasite clearance than older individuals.18 However, it is not well understood whether these factors are responsible for the previously observed day 3 PCR-determined P. falciparum positivity in Africa, rather than reduced parasite susceptibility against artemisinins.16,17

Therefore, the aim of this study was to evaluate the prevalence of, and risk factors associated with, PCR-determined P. falciparum positivity on day 3 after artemether–lumefantrine treatment initiation in clinical trials conducted between 2006 and 2014, covering pre-implementation and 8 years post-implementation of artemether–lumefantrine as first-line treatment for uncomplicated P. falciparum malaria in Bagamoyo district, Tanzania.

The blood samples used for PCR analyses in this report originated from four clinical trials conducted in Fukayosi and Yombo dispensaries in Bagamoyo district, Tanzania, between 2006 and 2014.22–24 The district has a tropical climatic condition, with annual rainfall averaging 1,100 mm. Malaria transmission is high and stable throughout the year, with a slight variation between rainfall and dry season.25 Plasmodium falciparum is the predominant malaria species and Anopheles gambiae sensu stricto is the main vector.26 Artemether–lumefantrine was adopted in Tanzania as a first-line treatment for uncomplicated P. falciparum malaria in November 2006. The use of long-lasting insecticide-treated mosquito nets is the major vector control method in the study area.27

The study subjects were recruited from patients with symptoms and signs compatible with acute uncomplicated P. falciparum malaria attending the dispensaries as previously described.22–24 Patients with microscopically confirmed P. falciparum mono-infection and who fulfilled all the inclusion criteria and none of the exclusion criteria were enrolled and treated under supervision with standard weight-based six-dose artemether–lumefantrine regimen according to the national treatment guidelines in Tanzania. For patients allocated with artemether–lumefantrine plus primaquine treatment, an additional single 0.25 mg/kg bodyweight primaquine dose was administered concomitantly with the first artemether–lumefantrine dose.24 Patients were observed for 30 minutes after the intake of each drug dose; and treatment was readministered in case of vomiting within this period. Patients with fever greater than 38.5°C were treated with paracetamol.

Laboratory assessment involved collection of a finger-prick blood sample from patients in all four studies for hemoglobin quantification, thick blood films for the microscopical determination of the presence of P. falciparum, and parasite density thin films for the species identification for the 2012–2013 and 2014 cohorts, and 100 µL of blood on a filter paper (3MM Whatman, Sigma-Aldrich Chemie Gmbh, Munich, Germany) for molecular genotyping of asexual parasites.

Genomic DNA was extracted from dried blood spots collected on a filter paper on days 0, 3, and, when applicable, on the day of microscopy-determined recurrent P. falciparum infection during follow-up using ABI PRISM® 6100 Nucleic Acid Prep Station (Applied Biosystems, Fresno, CA) for 2006, and on day 0 and the day of recurrent infection for 2007–2008 samples, whereas, a 10% chelex-100 (Bio-Rad Laboratories Ltd., Hertfordshire, United Kingdom) method was used for the day 3 samples for 2007–2008 trial, and days 0, 3, and the day of recurrent infection samples for the 2012–2013 and 2014 trials.22,30 The detection limit of the ABI PRISM 6100 extraction method has been estimated to be 200 parasites/μL and that of the chelex-100 method to be 2 parasites/μL.31

The amplicons were loaded, respectively, on GelRed™ (Biotium, Inc., Hayward, CA) stained agarose, separated by electrophoresis, and visualized under Ultra Violet transillumination (Gel Doc™ System; Bio-Rad, Hercules, CA) using Image Lab™ software (Bio-Rad). For merozoite surface protein (msp) 1 1, 2, and glurp, alleles in each family were considered the same if fragments’ size was within 20 base pair intervals. Patients with microscopy-determined recurrent P. falciparum infection, but with negative PCR results, were considered to have uncertain PCR-adjusted outcome and were consequently excluded from the final analysis. Recrudescence was defined as the presence of at least one matching allelic band, and reinfection was defined as the absence of any matching allelic band at baseline and on the day of parasite recurrence.34

Good Clinical Practice, Declaration of Helsinki, and applicable regulatory requirements in Tanzania were adhered to during the conduct of the trials. Approvals to conduct the respective trials were obtained from the Ethics Committees of the Muhimbili University of Health and Allied Sciences, National Institute for Medical Research, Tanzania Food and Drug Authority, and the Regional Ethics Committee, Stockholm, Sweden. Written informed consent was obtained from all patients and parents/guardians of patients aged < 18 years, before enrollment. The trials are registered with numbers: NCT00336375, ISRCTN69189899, NCT01998295, and NCT02090036.

Data were double entered and analyzed using R version 3.2.3 (R Foundation, Vienna, Austria). Independent proportions were compared using chi-squared test, whereas paired proportions were compared using McNemar chi-squared test. Age was negatively skewed and was, therefore, transformed using log. Trend of change in proportion of day 3 PCR-determined P. falciparum positivity, Pfmdr1 N86Y, and Pfcrt K76T across years was assessed using logistic regression model. Univariate and multivariate logistic regression models were used to assess the association of pretreatment risk factors with both residual parasites and recurrent infection. The association between pretreatment characteristics and day 3 PCR-determined P. falciparum positivity was assessed both for each trial individually and when data from all trials were pooled. The 2006 trial had a follow-up of 3 days only, and hence excluded in the analysis to assess the association of day 3 PCR-determined P. falciparum positivity and recurrent infection, including both crude microscopy-based recurrent infection and PCR-adjusted recrudescence, during follow-up after artemether–lumefantrine treatment. Mean differences between groups were compared using the analysis of variance. Data were censored at the time of withdrawal in case of patient lost to follow-up, withdrawal of consent, and PCR-adjusted reinfection or uncertain PCR outcome. A statistical significance level was set at P ≤ 0.05.

Characteristics of the study participants.

A total of 584 patients were screened for PCR-determined P. falciparum positivity on day 3, in which, 256 (43.8%) were PCR positive. Of the PCR-positive patients, only two (0.3%) had microscopy-determined asexual parasites on day 3. Pretreatment characteristics of the study participants are presented in Table 1. Participants in 2007–2008 were the youngest, had the lowest mean hemoglobin, and the highest microscopy-determined asexual mean parasite density, whereas in 2014 study, participants had the highest median age and hemoglobin levels, and the lowest mean parasite density. However, when a separate analysis was performed for children aged < 5 years, there was a slight change in the parameters, whereby children in 2006 had slightly lower mean age and hemoglobin concentration, whereas those in 2012–2013 had the highest microscopy-determined asexual parasite density (Table 1).

Pretreatment characteristics of the study participants

Prevalence of PCR-determined P. falciparum positivity on day 3 across years

Changes of Pfmdr1 N86Y and Pfcrt K76T between pretreatment and on day 3 across years of study.

After data were pooled, higher initial microscopy-determined asexual parasitemia (≥ 100,000/µL of blood), hemoglobin < 10 g/dL, age < 5 years, body temperature ≥ 37.5°C, and the year of study were found to be associated with the presence of PCR-determined P. falciparum positivity on day 3. However, when the respective trials were analyzed separately, the same factors were significantly associated with PCR positivity on day 3 in some trials, but not in others. Contrary to our findings, a study in Kenya did not observe any association of pretreatment characteristics with qPCR-determined parasite positivity on day 3.16 However, previous studies have shown pretreatment characteristics of both the host and parasite, including existing immunity, pretreatment parasitemia, parasite strains, parasite developmental stage, and parasite drug susceptibility, to affect microscopy-determined parasite clearance time.17,18,21,38,39

The strength of this study is that it included four studies conducted over different years, before and up to 8 years after implementation of artemether–lumefantrine as first-line treatment of uncomplicated malaria in Bagamoyo district. However, study limitations include, for example, that no blood sampling was performed to assess whether the PCR-determined P. falciparum parasites were cleared during follow-up between days 4 and 7. Moreover, neither was any evaluation of in vitro responsiveness to artemether–lumefantrine carried out nor assessment of day 7 lumefantrine concentration levels.

Day 3 PCR-determined P. falciparum positivity remained common in patients treated with artemether–lumefantrine before and after implementation of ACT as policy in Bagamoyo district, Tanzania. However, its presence was associated with pretreatment characteristics including high pretreatment asexual parasitemia (≥ 100,000/µL of blood), anemia (hemoglobin < 10g/dL), age < 5 years, documented fever at enrollment, and the year of study.