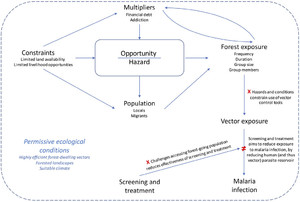 Forest Goers and Multidrug-Resistant Malaria in Cambodia: An Ethnographic Study

Multidrug-resistant Plasmodium falciparum malaria on the Cambodia–Thailand border is associated with working in forested areas. Beyond broad recognition of “forest-going” as a risk factor for malaria, little is known about different forest-going populations in this region. In Oddar Meanchey Province in northwestern Cambodia, qualitative ethnographic research was conducted to gain an in-depth understanding of how different populations, mobility and livelihood patterns, and activities within the forest intersect with potentiate malaria risk and impact on the effectiveness of malaria control and elimination strategies. We found that most forest-going in this area is associated with obtaining precious woods, particularly Siamese rosewood. In the past, at-risk populations included large groups of temporary migrants. As timber supplies have declined, so have these large migrant groups. However, groups of local residents continue to go to the forest and are staying for longer. Most forest-goers had experienced multiple episodes of malaria and were well informed about malaria risk. However, economic realities mean that local residents continue to pursue forest-based livelihoods. Severe constraints of available vector control methods mean that forest-goers have limited capacity to prevent vector exposure. As forest-goers access the forest using many different entry and exit points, border screening and treatment interventions will not be feasible. Once in the forest, groups often converge in the same areas; therefore, interventions targeting the mosquito population may have a potential role. Ultimately, a multisectoral approach as well as innovative and flexible malaria control strategies will be required if malaria elimination efforts are to be successful.