(A) Splenomegaly with a diameter of approximately 2 cm (top) was observed in the mice infected with the patient’s blood. For comparison, a normal mouse spleen with a diameter of 1.5 cm diameter is also shown (bottom). (B) Immunofluorescence antibody assay results of Orientia tsutsugamushi–infected cells. 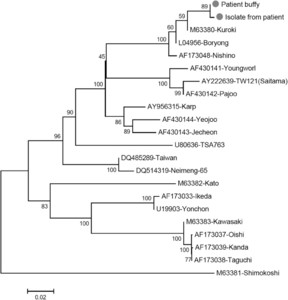 A 56-year-old female goat herder had scrub typhus that persisted after receiving doxycycline for 5 days. Her symptoms continued, prompting us to perform further examinations that revealed coinfection of Q fever and scrub typhus via molecular and serological testing. We also isolated Orientia tsutsugamushi using BALB/c mice and L929 cells.

Q fever is a zoonotic infection caused by Coxiella burnetii. Although mammals, birds, and arthropods are all reservoirs of C. burnetii, ticks are known to be one of the main carriers.1 The most common source of human infections is farm animals, including cattle, goats, and sheep.2

After 5 days of oral doxycycline treatment, she continued to experience myalgia, which led her to visit our ED again (November 7, 2016). The ED doctor performed laboratory tests again, and the CBC test findings were as follows: hemoglobin level, 13.6 g/dL; WBC, 10,190/mm3; platelet count, 397,000/mm3; and AST/ALT, 134.9/109.6 U/L. The doctor at the ED thought that the patient had post–scrub typhus asthenia; briefly, the doctor determined that the scrub typhus had been cured but that general weakness had continued. Therefore, the doctor did not prescribe further antibiotics. Instead, analgesics were prescribed. She was discharged. A week later, however, she visited the outpatient clinic of the Division of Infectious Diseases (November 14, 2017), complaining of severe fatigue that prevented her from walking. The patient was a goat herder. Her goats never miscarried, and she had extensive exposure to grass. We suspected Q fever based on her occupation and tested for scrub typhus, Q fever, Lyme disease, leptospirosis, and Brucella using the blood sample that we had collected during her outpatient visit (November 14, 2017; Table 1).

To diagnose scrub typhus, positive results were obtained by nested polymerase chain reaction (PCR) targeting O. tsutsugamushi–specific 56-kDa outer membrane target (using Karp strain as a positive control).3 In addition, positive results were obtained for both nested and real-time PCR (qPCR) testing C. burnetii IS1111.5,6 However, negative results were observed for PCR tests against the cytidine triphosphate (CTP) synthase gene (pyrG) and outer surface protein A (ospA), which were conducted to diagnose Lyme disease.7,8 Reaction mixture with distilled water instead of template DNA was used as a negative control during each run of PCR. On sequencing, we confirmed the results as Boryong strain in the case of O. tsutsugamushi and C. burnetii in the case of Q fever.

Blood collected from the patient was later intraperitoneally injected into two BALB/c mice treated with cyclophosphamide (Sigma-Aldrich, St. Louis, MO). The mice were dissected on the 14th day after inoculation, and splenomegaly was observed in both mice (Figure 1). Enlarged spleens were collected, homogenized, and inoculated into confluent monolayers of L929 cells. Inoculated L929 cells were observed daily for 5 days and then passaged every 5–7 days to new monolayers of L929 cells. To identify O. tsutsugamushi infection, we performed 56-kDa nested PCR and immunofluorescent antibody (IFA) testing in every batch of passaged cells. We found more than 50% incidence of O. tsutsugamushi infection after five passages of inoculated L929 cells. Finally, we successfully isolated O. tsutsugamushi but could not isolate C. burnetii. A phylogenetic tree was constructed based on partial 56-kDa type-specific gene sequences of O. tsutsugamushi, using the patient’s blood (buffy coat) and culture isolate sequences, along with the reference sequences obtained from the GenBank (Figure 2).

There have been reports of scrub typhus patients who exhibit coinfection with Leptospira spp.9 It is noteworthy that worldwide there has been only one other report of Q fever and scrub typhus coinfection from Taiwan.4 However, the Taiwanese study confirmed the presence of coinfection based on serological diagnosis alone.

In the presented study, we have reported the C. burnetii coinfection using the molecular diagnostic method. In addition, an IFA test against Lyme disease yielded titers of 32 for both IgM and IgG, and Western blot results were also positive. Although the antibody titers increased to 128 at follow-up, the Western blot of the specimen from the follow-up was negative. Follow-up tests conducted in February and May of 2017 yielded an antibody titer of 16 for IgG and a titer below 16 for IgM (Table 1).

In Q fever, C. burnetii proliferates in macrophages, allowing prolonged bacteremia. Higher levels of antibodies and immune complex formation can also occur. It has been reported that a high level of anticardiolipin antibody is associated with a rapid progression of acute Q fever.10 In our study while testing for Lyme disease, the patient’s first serum showed a positive band on P100, P41 OspC against IgM but a negative band for IgG. However, any of the follow-up samples did not show positive results for IgG as well as IgM. Moreover, both PCR tests conducted to detect Borrelia spp. using an initial blood sample showed negative results (targeting the CTP synthase gene [pyrG] and outer surface protein A [ospA]). Because various nonspecific antibodies are known to be formed in Q fever patients, the patient’s increased Lyme disease antibody titer is unlikely to have resulted from the actual presence of the disease, suggesting that the positive IFA test result was likely a false-positive result.11

Coxiella burnetii can be isolated from at least nine different species of mites collected from rodents and birds, including Allodermanyssus sanguineus and Hirstionyssus criceti.12 Therefore, although the role of mites as an arthropod reservoir of C. burnetii is unclear, additional studies are needed to assess the possibility that C. burnetii and O. tsutsugamushi coinfection can result from mite bites.

It is known that most patients with scrub typhus exhibit defervescence within 48 hours of appropriate antibiotic treatment. Therefore, if fever has not relieved within 48 hours, other diseases, such as malaria or dengue fever, should be suspected.10 Moreover, antibiotic treatment (doxycycline) reduces the rate of positive PCR test results to 10% within 4 days.13 In a controlled trial, we confirmed a 97.8% cure rate of mild-to-moderate scrub typhus after 5 days of doxycycline treatment.14 In this case, the patient’s follow-up blood was negative for O. tsutsugamushi but her condition did not improve with the provided treatment; hence, additional investigation was performed toward coinfection identification.

In any case, this study has several limitations that are important to mention. We failed to isolate C. burnetii from a mouse injected with the sample, and we did not obtain a definitive confirmation based on serology. Neither seroconversion nor a four-fold increase in IgG phase II titters in convalescence samples was documented. We could not exclude the possibility that the presence of IgG against C. burnetii was attributable to residual antibodies from a previous exposure. In addition, we could not exclude the possibility of C. burnetii DNA contamination during nested PCR.

In conclusion, this is the first study to identify scrub typhus and Q fever coinfection both molecularly and serologically. Moreover, we have the following suggestions for clinicians from regions in which scrub typhus and Q fever are endemic. Diagnosis should proceed carefully for a patient with eschar who is suspected of having scrub typhus. Attention should be paid to the possibility of coinfection with Q fever if the patient does not respond to doxycycline treatment, especially if he or she works in the livestock industry.