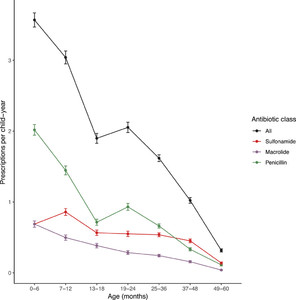 Increasing antibiotic consumption has been shown to lead to selection for resistant bacterial strains at the individual and community levels.1 In sub-Saharan Africa, pediatric antibiotic therapy is often guided by clinical symptoms because of lack of microbiologic diagnostic facilities in many regions.2 Such a strategy is thought to be sensitive but nonspecific because of viral or noninfectious illnesses being classified as bacterial infection,2 with sensitivity ranging from 80% to 95% and specificity ranging from 40% to 80% in young infants.3 This results in antibiotic treatment of infections or illnesses that are non-bacterial in nature. Furthermore, lack of susceptibility data to guide treatment decisions may result in inappropriate treatment, which can result in adverse clinical outcomes and mortality.4,5 Although the WHO recommends tailoring empiric therapy to local resistance patterns, in practice such a strategy is difficult in the absence of laboratory facilities. Understanding pediatric antibiotic use patterns may provide some evidence of which areas are at greater risk of selection for antibiotic resistance.

This study took place in 20 communities and six Centres de Santé et de Promotion Sociale (CSPSs) located in the rural Health and Demographic Surveillance Site (HDSS) of Nouna in northwest Burkina Faso serving a population of 3,401 children younger than 5 years.8 CSPSs are government primary health-care facilities in Burkina Faso that deliver preventive and curative care to a catchment area covering several villages. Health care for children younger than 5 years has been provided free of charge since 2016, and the median distance from communities to the CSPS is 8 km.8,9 Childhood vaccination coverage in the Nouna HDSS has increased over time, from 72% in 2012 to 81% in 2014.10 The HDSS conducts a triannual census, in which all members of all HDSS communities are enumerated.

Data collection for the study took place in July 2017, corresponding with the malaria season in this region of Burkina Faso.11 The data collection period for antibiotic prescriptions covered March through June, before the malaria season. The Institutional Review Boards at the University of California, San Francisco, and the Centre de Recherche en Santé de Nouna reviewed and approved all study procedures. Verbal informed consent was obtained from the caregivers of all children participating in the caregiver survey.

We collected antibiotic prescription data from the six participating CSPSs over a 3-month period from March 23 to June 23, 2017. At each CSPS in the country, pediatric prescription data are recorded on paper forms that are submitted to the government to cover expenses related to care for children younger than 5 years. On each form, the child’s age, gender, and village of residence are recorded, as well as the treatment prescribed, the dose, and duration of treatment.

We used the most recent census (March 2017) from the HDSS to generate a list of all children aged 6–59 months residing in each community. Caregivers were interviewed in July 2017. Fifteen children were randomly selected from each census list and a caregiver interviewer was administered for each randomly selected child. In one community (Biron Badala), only seven children were found from the list, and, therefore, children were oversampled from a neighboring community (Biron Bobo). Caregivers were asked if they had sought care for the child at a health-care facility in the past 30 days, and if so, the reason for the visit and treatment received (antibiotics, antimalarials, or antiparasitics). To aid caregivers in accurately reporting treatments, caregivers were shown photographs of commonly used antibiotics, antimalarials, and antiparasitics. Caregivers were also asked if their child had received any antibiotics in the past 3 months, and if so, where the child received the antibiotics, for how many days the child was treated, and how many weeks had elapsed since the antibiotic prescription.

Three hundred and one caregiver questionnaires were administered: The median age of the children was 37 months (IQR 24–49 months) and 50.2% were female. Caregivers of 82 children (27.3%) reported that their child had visited a health facility for a health problem in the previous month, mostly for malaria and fever (Table 2). Most who visited the health facility reported receiving antibiotics (84.1%). More than one-third (38.6%) of the caregivers reported that their child had received an antibiotic in the past 3 months. Only one caregiver reported that the antibiotic came from a source other than the CSPS or the dispensary associated with the CSPS.

We documented relatively high antibiotic consumption among children younger than 5 years compared with that in other geographic areas in a rural area of Burkina Faso during the hot, dry period immediately before the rainy season. Prescriptions were highest among the youngest children, and dropped steadily with increasing age. Previous estimates have shown that antibiotic consumption varies widely geographically among children below age 2 years, with the highest use in countries in South Asia (10 courses per child-year) and lowest use in Brazil and South Africa (one course per child-year).6 In the present study, our estimate of approximately two prescriptions per child-year was lower than all but two sites included in the previous report.6 Recent work has shown that although antibiotic consumption in Francophone West Africa, including Burkina Faso, is among the lowest in the world, antibiotic use is increasing.13

The most commonly prescribed antibiotic class was penicillin. Amoxicillin is recommended by the WHO for treatment of pneumonia.14 Malaria was the commonest reason for seeking care in this study. Malaria often presents with similar clinical symptoms as respiratory illness, including tachypnea and fever, and children receiving care for malaria were commonly given an antibiotic. In other community-based treatment settings in sub-Saharan Africa, the most common reasons for presentation include fever, upper respiratory infection, malaria, and diarrhea, and penicillins have been reported as the most commonly used antibiotic class.3,15–17 Antibiotic consumption data collection was primarily conducted in the dry season, during which time pneumococcal carriage and pneumonia have been shown to be increased relative to the rainy season.18,19 Extrapolating the results of this antibiotic survey to the entire calendar year requires the assumption that antibiotic prescription trends are constant over the year, which may not be true because of the seasonality of common childhood infections. Furthermore, establishing the causative agents of childhood infection was not possible in this study, as all treatments were presumptive based on symptoms. Future studies evaluating causative agents as well as duration of therapy and completion of antibiotic courses would be useful to better understand antibiotic use in rural communities.

We were only able to extract antibiotic prescriptions from the CSPS, and if children received antibiotics from other sources, we were not able to capture it. However, in this study caregiver report of antibiotic consumption indicated that obtaining antibiotics from sources other than the CSPS was uncommon. Adding this reported usage would have resulted in negligible differences in our effect estimates. Previous work had shown high concordance between mothers’ report of antibiotic use and antibiotic prescription.6 Most prescriptions in this setting likely came from the CSPS. However, we were unable to link children in the HDSS to the CSPS prescription data, and thus cannot validate caregiver report with CSPS records.

In this study of children in rural Burkina Faso, we demonstrated that antibiotic prescription is common, with children receiving an average of two prescriptions per year. This estimate is lower than what has been reported in high-income settings. Continued monitoring of antibiotic use in this and similar settings will be important to understand the potential for the emergence of antibiotic resistance and to develop rational antibiotic use programs.