Number of recurrences of acute rheumatic fever according to number of days at risk (days more than 28 days after the last benzathine penicillin G dose). 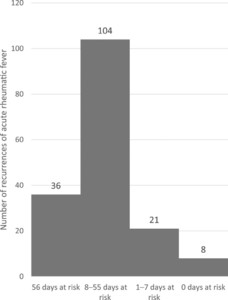 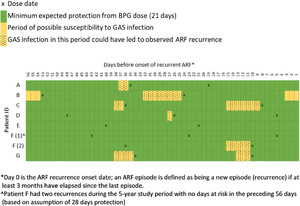 This study aimed to identify recurrent acute rheumatic fever (ARF) episodes which occurred despite adherence to prophylactic benzathine penicillin G (BPG). Data from Australia’s Northern Territory were analyzed; ARF recurrences between 2012 and 2017 diagnosed while the person was prescribed BPG were identified. Days at risk (DAR)—median and interquartile range—preceding ARF onset were calculated. The timing of BPG doses was examined for individuals with no DAR. One hundred sixty-nine ARF recurrences were analyzed; median DAR in the previous 8 weeks before ARF onset was 29. Most recurrences occurred following > 7 DAR (87%). Eight recurrences (5%) occurred despite no DAR; all were aged less than 16 years at the time of their recurrence/s. Recurrent ARF most commonly occurs after delayed BPG doses, but in some cases, receiving every prescribed BPG dose on time did not prevent recurrent ARF. A method to identify high-risk individuals before recurrent ARF is needed.