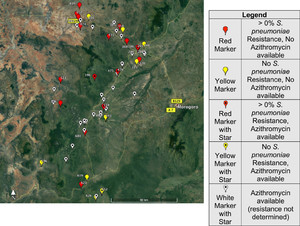 A Cross-Sectional Study of the Availability of Azithromycin in Local Pharmacies and Associated Antibiotic Resistance in Communities in Kilosa District, Tanzania

Mass drug administration (MDA) of azithromycin, whereby a single dose (20 mg/kg) is administered annually to all residents in a trachoma-endemic district until the prevalence in children aged 1–9 years falls below 5%, is central to trachoma control.1 Despite its established efficacy, there is concern for the development of antibiotic resistance, particularly in Streptococcus pneumoniae (Spn) and Escherichia coli (Ec).2,3

Although resistance of Chlamydia trachomatis to azithromycin in the context of trachoma control has not been reported,4 studies have found a greater than 2-fold rise in the proportion of children colonized with macrolide-resistant Spn 6 months following MDA.5 When azithromycin was used in multiple rounds of MDA in Ethiopia, prevalence of resistance was high in treated children and remained elevated (> 20% prevalence) for at least 2 years after MDA cessation.6

However, the contribution of freely available antibiotics in local pharmacies in these settings to the development of resistance has not been studied, and the availability of azithromycin in these pharmacies is relatively unknown.

This study was approved by the Johns Hopkins School of Medicine Institutional Review Board and the Tanzania National Institute for Medical Research. Written informed consent was provided to all participants, and the study was conducted according to the tenets of the Declaration of Helsinki.

There were 706 hamlets in Kilosa district, Tanzania, ranging in size from 1,000 to 2,000 residents. The hamlets were grouped into larger “villages” that ranged in population size from 3,000 to more than 10,000. Kilosa district had active trachoma and underwent 4 years of annual MDA, until the prevalence of trachoma decreased to less than 5% in 2010 and MDA was no longer deemed necessary. In June 2014, a trachoma surveillance study found that the prevalence of trachoma in children ages 1–9 years was 0.4%.

In November 2014, a complete census of all children between the ages of 1 month to 59.9 months was conducted in 644 randomly selected hamlets, preparatory to a clinical trial.8 In 30 randomly selected hamlets, a random sample of 60 children between the ages of 1 month to 59.9 months were invited to the baseline survey, or all children were invited if the total was less than 60. The baseline survey included testing for resistance to azithromycin in isolates of Ec from rectal swabs and isolates of Spn from nasopharyngeal swabs in randomly selected children. Nasopharyngeal and rectal specimens were collected and stored as previously described.7

Streptococcus pneumoniae was isolated from nasopharyngeal swabs with blood agar containing 5% sheep blood and 5 mg/L gentamicin (Becton Dickinson, Cockeysville, MD) and incubated at 37°C in 5% CO2 for 18–24 hours. The Spn isolates were tested for sensitivity to azithromycin (15 μg disk) using the Kirby–Bauer disk diffusion method on Mueller–Hinton media with 5% lysed sheep blood. The isolates were classified as “sensitive (> 17 ZD),” “intermediately resistant (≥ 14, ≤ 17 ZD),” or “resistant (< 14 ZD)” using inhibitory zone diameters based on the recommendations of the Clinical and Laboratory Standards Institute.9 The rectal swabs were cultured for Ec on MacConkey agar overnight at 37°C. Resistance was defined as a zone diameter < 10 mm.

All of the 644 hamlets were surveyed for the presence of a pharmacy or small shop that sells medications. The hamlets were categorized as to whether or not a pharmacy was present in the hamlet. If more than one pharmacy was present in the hamlet, a single pharmacy was selected at random for the survey. Data were collected by a trained interviewer who observed the availability of azithromycin tablets and/or liquid, as well as erythromycin tablets and/or liquid in each pharmacy. In the 30 randomly selected hamlets where the resistance study was undertaken, all pharmacies were queried about the availability of azithromycin and erythromycin. Of note, a prescription is not required to access antibiotics in the local pharmacies. As a quality check, a sample of five pharmacies were revisited to determine the presence or absence of azithromycin, and no discrepancies were found.

Using Samsung Galaxy 4 and Nexus 7 tablets (Samsung Electronics, Suwon, South Korea), latitude and longitude data were collected from the built-in global positioning system (GPS) transmitter and satellite-based systems for all households in each hamlet, and an average was used to characterize the location of each hamlet.

The percentage of hamlets in Kilosa district with a pharmacy was calculated, and the percentage of those pharmacies that had azithromycin or erythromycin determined. These were geo-positioned on a map using Google Earth.

Availability of azithromycin and erythromycin in all 171 pharmacies surveyed, by distance to a main road

Using GPS to locate the closest pharmacy to every hamlet, 30.8% and 89.1% of the 644 hamlets had access to a pharmacy with azithromycin or erythromycin available, respectively, even if the pharmacy was not within the hamlet itself. The randomly selected hamlets had comparable levels of access as the rest of the hamlets to azithromycin (23.3% versus 31.1%) and erythromycin (90.0% versus 89.1%) (Table 2).

The contribution of azithromycin availability in local pharmacies to the finding of ongoing resistance after cessation of MDA 4 years prior appears to be small. First, the availability of a pharmacy at all in the local hamlets was relatively small; only 27% of hamlets had pharmacies. Second, the number of pharmacies in which azithromycin was present was even fewer, 28% of the 171 pharmacies. Even after allowing for access to pharmacies in nearby hamlets, less than a third of the hamlets had access to a pharmacy that carried azithromycin. Finally, the findings suggested that the few hamlets with access to a pharmacy with azithromycin were more likely to have isolates with resistant strains of Spn or Ec, but the finding was not statistically significant. All the pharmacies in the study were geo-mapped in the district according to whether they had azithromycin or not, and the spatial relationship to the hamlets with isolates resistant to azithromycin, but again no pattern was observed.

There are a variety of possible reasons as to why antimicrobial resistance is present in the index hamlets. Following multiple rounds of MDA, investigators have found a slow decline in resistance 4 years after MDA for trachoma control had ended.6 The fact that Kilosa district had undergone multiple rounds of MDA in the past is the most likely contributor to ongoing resistance in these communities. In addition, erythromycin was readily available in the pharmacies. Cross-resistance between erythromycin and azithromycin can develop and contribute to resistance.10 It is also possible that the observed resistance developed from a transfer of resistance and housekeeping genes from related pneumococci and/or other species.11 The contribution of any one of these mechanisms to the level of resistance in the district is uncertain.

The availability of azithromycin and erythromycin in local pharmacies suggests nonprescription use of antibiotics is present in the district. The cost of a course of azithromycin was $5,000 TSH (∼$2 USD at time of writing), whereas a course of erythromycin was even less. The technician on duty was not queried to find out the indications for which azithromycin or erythromycin would be provided to a customer, but when asked to see them, the technicians provided them freely. As the hamlets grow and more pharmacies open, the practice of nonprescription use of antibiotics will likely increase.

There is evidence showing that the use of antibiotics, including macrolides, in food animals plays a role in the colonization of antibiotic-resistant bacteria, such as E. coli, in humans through exposure or consumption.12 In northern Tanzania, antimicrobial use in animals is relatively common, especially among agropastoral groups where there may be little regulation or involvement of veterinary professionals. In addition, the continued consumption of meat and milk from animals during and shortly after antimicrobial treatment is common among certain Tanzanian ethnic groups.13 However, widespread antibiotic use in animals in Kilosa district is unlikely given that the population is socioeconomically marginalized. Nevertheless, purchase of animals and migration of herds is very common and could lead to the spread of resistant isolates. Improper handling and cooking of animal products, as well as poor infection control and unsanitary conditions can lead to the spread of antimicrobial resistance.14

The study had limitations. First, it did not consider the availability of azithromycin in every pharmacy in Kilosa district; as the sample included 644 hamlets of the 706, and there were a few hamlets where there was more than one pharmacy, data were collected from one randomly selected pharmacy. Nonetheless, the sample is representative and large relative to the district, so the relative scarcity of azithromycin is likely a reasonable conclusion. In the random sample of 30 pharmacies, only two hamlets had more than one pharmacy and complete data were collected from all of them. For the resistance component, the status of the hamlet pharmacy is known for those hamlets.

Second, because each pharmacy was visited on only one occasion, it is possible that a pharmacy could have run out of its supply of azithromycin when the survey was conducted. The interviewer asked to see the tablets and liquid to verify that they were present. Based on the packaging, it was apparent that none of the azithromycin was diverted from the National Trachoma Control program functioning elsewhere in the country. However, it is possible that the pharmacies that denied having azithromycin did so to avoid drawing attention, if the drug had been obtained from a non-authorized source.

Third, the estimation of proximity of each pharmacy to a hamlet was based on straight line distance. Although terrain was considered, many households were dispersed in a hamlet and a lack of clearly defined roads limited our estimation of each hamlet’s closest pharmacy; however, the proximity was confirmed by checking with the field staff in the event of uncertainty. Finally, with 30 hamlets contributing to the resistance data, and few hamlets with access to pharmacies that had azithromycin, we were limited in our power to detect an association between resistance and local azithromycin availability.

In conclusion, this study suggests there was likely limited impact of the availability of azithromycin in pharmacies on the prevalence of azithromycin-resistant bacteria in Kilosa district.