Flow of cases from hospital admission to household investigation.

Epidemic curve in the Kathmandu Valley, Nepal, 2016. Confirmed cholera cases shown in bars, defined as all individuals who are positive for Vibrio cholerae by culture (n = 169).

Geographic distribution of cholera cases in the Kathmandu Valley, 2016. Points indicate the location of the case. Triangles show the location of hospital sentinel surveillance sites.

Comprehensive targeted intervention surveillance and response performance. (A–C) Box plots of each segment of the response activities, mean response time is represented by a colored diamond. (D) Each bar represents a study participant. The bars indicate the time from hospital admission of the index case to initiation of a water, sanitation, and hygiene (WASH) intervention in the neighborhood of that case. Colors correspond to individual segments of time and apply across plots as follows: time from hospital admission to result of laboratory culture (blue), time from laboratory result to household investigation, and time from household investigation to WASH intervention. Data are only shown for cases in which complete date information is available for at least one segment of the response activities (n = 165). 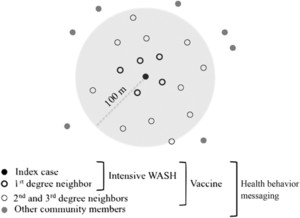 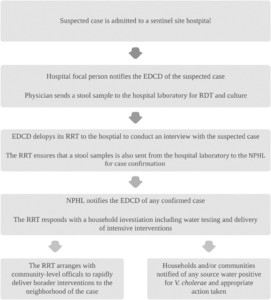 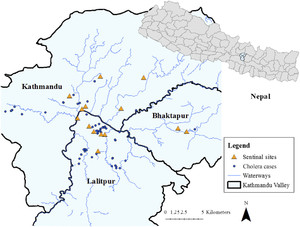 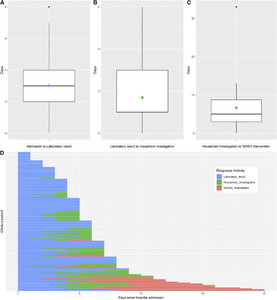 Feasibility of a Comprehensive Targeted Cholera Intervention in The Kathmandu Valley, Nepal

A comprehensive targeted intervention (CTI) was designed and deployed in the neighborhoods of cholera cases in the Kathmandu Valley with the intent of reducing rates among the neighbors of the case. This was a feasibility study to determine whether clinical centers, laboratories, and field teams were able to mount a rapid, community-based response to a case within 2 days of hospital admission. Daily line listings were requested from 15 participating hospitals during the monsoon season, and a single case initiated the CTI. A standard case definition was used: acute watery diarrhea, with or without vomiting, in a patient aged 1 year or older. Rapid diagnostic tests and bacterial culture were used for confirmation. The strategy included household investigation of cases; water testing; water, sanitation, and hygiene (WASH) intervention; and health education. A CTI coverage survey was conducted 8 months postintervention. From June to December of 2016, 169 cases of Vibrio cholerae O1 were confirmed by bacterial culture. Average time to culture result was 3 days. On average, the CTI Rapid Response Team (RRT) was able to visit households 1.7 days after the culture result was received from the hospital (3.9 days from hospital admission). Coverage of WASH and health behavior messaging campaigns were 30.2% in the target areas. Recipients of the intervention were more likely to have knowledge of cholera symptoms, treatment, and prevention than non-recipients. Although the RRT were able to investigate cases at the household within 2 days of a positive culture result, the study identified several constraints that limited a truly rapid response.