Change in platelet count during intensive care admission for patients with septic shock in the Darwin Prospective Melioidosis Study, grouped according to survival. 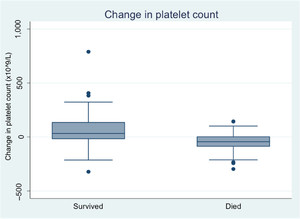 Clinical Utility of Platelet Count as a Prognostic Marker for Melioidosis

The role of platelets in the complex pathophysiology of sepsis remains to be fully elucidated, but thrombocytopenia is commonly seen in severe sepsis.1,2 In Thailand, thrombocytopenia was common in diabetic patients with severe melioidosis and correlated with mortality.3 Further studies from Thailand have now confirmed that thrombocytopenia was present in 31% of all melioidosis patients and predicted mortality.4 In addition, in a murine experimental model of melioidosis, platelets were suggested to have a protective role in both innate immunity and vascular integrity.4 The implications of these studies for both clinical assessment and potential future adjunctive therapies in melioidosis remain unclear.

The Darwin Prospective Melioidosis Study (DPMS) from tropical northern Australia commenced in 1989, and an earlier analysis of outcomes showed a number of variables that were independently predictive of mortality; pneumonia at primary presentation, diabetes, hazardous alcohol intake, renal impairment, age at admission, lymphocyte count, serum urea, serum bilirubin, and serum bicarbonate.5 Platelet count was not included in that analysis, and we have now analyzed platelet counts in the Darwin cohort, with additional data analyzed from a cohort of melioidosis patients from Cairns in tropical North Queensland.

Statistical tests were performed using STATA15 for Windows (StataCorp LP, College Station, TX). Platelet counts were compared across subgroups of patients based on clinical outcomes: bacteremia, septic shock, and death. The two-sample Wilcoxon rank–sum test was used to determine statistical significance. Box plots were generated to compare the distribution of platelet counts between subgroups. The proportion of patients with thrombocytopenia (platelet count less than 150 × 109/L) in each subgroup was also calculated. For patients who developed septic shock, the change in platelet count between admission and intensive care discharge or death was compared between patients who recovered and those who died from their illness.

Logistic regression analysis was carried out for potential predictors of mortality. Clinical parameters previously shown to be independently associated with mortality5 (diabetes, hazardous alcohol intake, renal impairment, age at admission, lymphocyte count, serum urea, serum bilirubin, and serum bicarbonate) were extracted from the DPMS database. Bivariate logistic regression analysis was conducted for each of these variables in addition to admission platelet count. Variables found to be significant (using a significance level of 0.05) on bivariate analysis were confirmed on multivariate analysis by stepwise exclusion of nonsignificant variables from the multivariate model.

In the bivariate model, the following factors were significantly associated with mortality; platelets, age, hazardous alcohol use, serum bilirubin, serum urea (log transformation), and serum bicarbonate (data not shown). Using stepwise removal of variables, platelets, age, bilirubin, urea, and bicarbonate were each independently associated with mortality in the multivariate model (data not shown). The multivariate model indicated that reduced platelet count is an independent predictor of mortality in melioidosis patients, with a 50 × 109/L increase in platelet count associated with a reduction in mortality by a factor of 22%.

The results from this large number of patients confirm that admission platelet count is an independent predictor of severity of and mortality due to melioidosis in Australia, as previously shown in Thailand. Furthermore, in patients critically ill with melioidosis, an increasing platelet count after admission is associated with a significantly greater chance of survival. Nevertheless, there is substantial overlap in the range of platelet counts shown for each illness severity cohort (Figure 1). For instance, of the fatal cases, 41/66 (62%) in Darwin and 20/30 (67%) in Cairns had a normal platelet count at presentation. This cautions against using platelet counts to predict severity or outcomes in patients with melioidosis. This is similar to a prior analysis of C-reactive protein (CRP) from the DPMS, which found that the admission CRP levels may be normal or only mildly elevated in patients with severe sepsis and in subsequently fatal cases.8

The development of thrombocytopenia in sepsis is secondary to various mechanisms that result in platelet activation, sequestration, and destruction.9 The pathogenesis of melioidosis includes extensive abnormalities in the coagulation system such as excess Von Willebrand factor and deficiency of ADAMTS13 (A Disintegrin And Metalloprotease with a ThromboSpondin type 1 motif, member 13).3 These findings have been described in other patients with severe sepsis.10 However, correlation analysis suggested that these two markers of endothelial stimulation were not the primary drivers of thrombocytopenia in the melioidosis patients in Thailand.3 Other possible causes of the thrombocytopenia in melioidosis include disseminated intravascular coagulation (DIC) and hemophagocytosis.11 Although these possibilities have not been systematically studied in the DPMS, DIC was not found to be overtly evident in the Thai cohort.3

Understanding of the role of platelets in the host response against bacterial pathogens in general and against B. pseudomallei specifically is evolving, in particular the interactions of platelets with neutrophils and the innate immune system.12,13 The murine model of melioidosis showed that mice depleted of platelets had decreased survival and increased bacterial numbers in the lungs.4 However, in that study, platelet depletion did not directly influence growth of B. pseudomallei, but did impair early neutrophil recruitment to the lungs, with the conclusion that platelets play a protective role in both innate immunity and in vascular integrity. Taken together, data from the cohorts from Australia and Thailand show that thrombocytopenia is associated with a more disturbed host response in melioidosis. Nevertheless, although the animal studies suggest that reduced platelet counts may lead directly to adverse outcomes per se, it remains possible that the thrombocytopenia seen in severe melioidosis in humans is predominantly secondary to and a reflection of the severity of disease.