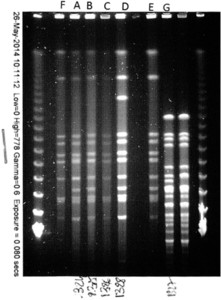 High Prevalence of Leptospira spp. in Rodents in an Urban Setting in Madagascar

Leptospirosis is a neglected zoonotic bacterial disease caused by pathogenic Leptospira spp. Only limited studies have been conducted on the presence of Leptospira spp. in rats in Antananarivo, the capital city of Madagascar. We assessed Leptospira prevalence in small mammals in urban areas of Antananarivo where sanitation is inadequate and there is risk of flooding during the rainy season. We captured rodents and shrews at two sites and examined kidney samples from 114 animals using culture and a real-time polymerase chain reaction (PCR) assay specific to pathogenic Leptospira spp. We identified 23 positive samples containing Leptospira interrogans and Leptospira borgpetersenii, with a high prevalence in Rattus norvegicus (44.9%). Our results indicate that small mammals, in particular R. norvegicus, present a major public health risk for acquiring leptospirosis in Antananarivo.

Leptospirosis is a zoonotic disease with a worldwide distribution but is more common in the tropics where conditions for its transmission are favorable.1 Rattus norvegicus (brown rat) and Rattus rattus (black rat) are two species of rodents commonly associated with leptospiral infection. Leptospira spp. persist in the kidneys of their hosts and are excreted into the environment via urine, where they can survive for several months, especially with favorable humid and warm conditions. Outbreaks of leptospirosis are associated with heavy seasonal rainfall.1 Humans are infected via contaminated food, soil, or water. Because of the expansion of urban slum populations, leptospirosis is considered an increasing urban health problem.2,3

Few cases of leptospirosis are recorded in Madagascar because of unawareness and difficulties in diagnosing the disease in both humans and animals. Thus, the incidence of leptospirosis in humans in Madagascar is largely unknown and data on carriage rates in small mammals are scarce. There is recent evidence of human cases associated with presence of rats in and surrounding homes,4 likewise, serological surveys of human populations in rural areas revealed prevalence rates ranging to 3%.5 That said, Leptospira interrogans was previously detected in Rattus spp. in coastal and rural areas,6 and L. borgpetersenii, Leptospira mayottensis, and Leptospira kirschneri were detected in endemic small mammals,7 and bats.8 However, little is known about leptospirosis in urban areas of Madagascar, even though socioeconomic environments in these areas are favorable for a high incidence of this disease. Thus, understanding the prevalence of Leptospira spp. in urban small mammal reservoirs is crucial for effectively controlling this zoonotic disease.9 The aims of this study were to assess small mammal Leptospira carriage rates in Antananarivo, the capital city of Madagascar, and identify circulating serovars, with the goal of better informing control and prevention measures.

Small mammal surveys were conducted in two urban areas of Antananarivo from September to December 2014 during the rainy season. Antananarivo is located in the central highlands of Madagascar and has a cold dry season from May to September and a hot rainy season from October to April. The two sites, Andohatapenaka and Ampefiloha Ambodirano, are separated by approximately 2 km and are both characterized by inadequate sanitation and high-density human populations.

At both sites, traps were distributed inside 20 houses located close to irrigated rice fields and standing water. Aluminum Sherman traps (for mice and shrews) and wire mesh traps (for rats), both baited with dried fish and onion, were used for trapping periods consisting of three consecutive nights.

Captured animals were collected and transported to the Institut Pasteur de Madagascar, where they were euthanized with carbon dioxide and handled according to the European Union Legislation Directive 2010/63/EU. Following euthanization, the animals were weighed and identified based on morphological measurements, such as lengths of head, body, tail, ear, and hind foot. Kidneys were removed from all animals and stored in 95% ethanol for subsequent molecular analysis, and kidneys from 23 adult rats, mice, and shrews were inoculated into liquid Ellinghaussen McCullough Johnson and Harris (EMJH) medium with antibiotics rifampicine and five 5-fluorouracil.6 Incubation was performed at 28°C in the dark for up to 3 months.

DNA was extracted from kidneys using DNeasy Blood and Tissue Kit (QIAGEN, Valencia, CA) following the manufacturer’s instructions, and the resulting extracts were screened for the presence of DNA from pathogenic Leptospira using a Taqman real-time PCR assay that amplifies a portion of the 16S rRNA gene, as previously described.10 DNA extracts positive for Leptospira, as well as all obtained Leptospira isolates, were identified to the serovar level at Institut Pasteur Paris via pulsed-field gel electrophoresis using NotI restriction enzyme.11

A total of 114 rodents and shrews from four species were trapped during the study (Table 1): Mus musculus (n = 59), R. norvegicus (n = 49), Suncus murinus (n = 4), and R. rattus (n = 2). DNA extracts from the kidneys of all 114 animals were screened with real-time PCR and 23 (20.2%) R. norvegicus and M. musculus, were positive for the presence of Leptospira spp. DNA. At both sites, highest prevalence rates were found in R. norvegicus: 50% in Andohatapenaka and 42.4% in Ambodirano. Three to four months after culture in EMJH medium, six isolates (each from a different culture) were obtained from the 23 cultures (26.1%); all six isolates were obtained from R. norvegicus (Table 1). Five of these isolates were sent to the Institut Pasteur Paris for identification to the serovar level, which assigned four isolates to L. interrogans serogroup Canicola serovar Kuwait and one isolate to L. borgpetersenii serogroup Ballum serovar Arborea (Figure 1). The 6th isolate was not sent because of technical reasons.

NA = not applicable as this species was not collected at this site; qPCR = Taqman real-time PCR.

Rodents are known to be the most important transmission sources of leptospirosis to humans.6,12,13 At our two study sites in Antananarivo city, M. musculus was the most common commensal rodent living in human habitations, followed closely by R. norvegicus. By contrast, both R. rattus and S. murinus were much less abundant and, together, represented only 5.3% (6/114) of all of the captured small mammals; neither species was trapped at the Andohatapenaka site. Our findings are consistent with previous studies of rats in Madagascar,14–16 that found that R. norvegicus is better able to adapt to urban environmental conditions, whereas R. rattus is more common in rural areas. Despite M. musculus being the most abundant rodent captured in our study, R. norvegicus is a more likely source of Leptospira infections in humans as the overall prevalance of infected R. norvegicus is quite high (22/49; 44.9) and only one M. musculus was positive for Leptospira infection (Table 1). Although no infected R. rattus and S. murinus were found at any of the two sites, they were identified as a potential reservoirs hosts and they have the ability to shed viable leptospires in their urine.6

Leptospirosis risk is high in these sites because of the presence of infected rats that shed leptospirosis in the environment. Behavioral risks have been noted; living in proximity to sewage and garbage where rodents frequent, lack of sanitation, etc. Exposure to flooded water during heavy rainy season can also be considered as one of the main risk factors. Rice farming is the predominant occupation in these study areas and humans live very close to the rice field. Thus, the presence of multiple mammals such as dogs, cattle, and pigs that coexist with human beings in these poor urban settings may be important in the epidemiology of human leptospirosis. In conclusion, this study confirms that one important reservoir of leptospirosis in urban areas within Antananarivo is R. norvegicus and suggests that the high population density of R. norvegicus is the main factor facilitating transmission of leptospirosis to humans in this city. It also provides better characterization of Leptospira spp. diversity, including identification of the pathogenic species and serovars circulating among the urban rat population, and serves to highlight the epidemiology of this disease in an urban city such as Antananarivo where rodents live in close proximity to humans because of unsanitary conditions and polluted water. Rodent control and sensitized on household hygiene and sanitation should be implemented to prevent human leptospirosis.