Summary of the selection process and reasons for study exclusion. 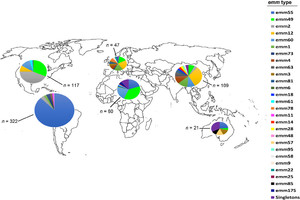 Acute post-streptococcal glomerulonephritis (APSGN) is a postinfectious immune-mediated kidney disease associated with group A Streptococcus (GAS). The prevalence of APSGN varies within and between countries and is influenced by socioeconomic, host, and bacterial factors. The disease is more prevalent in developing countries and resource-poor settings of developed countries, such as the Indigenous populations residing in tropical Australia. The M-protein is a universally present GAS surface antigen that is the focus of molecular typing and vaccine research. Early reports suggested that some M-proteins (emm types) are more likely to cause APSGN than others. Here, we present the first systematic review of the global distribution of APSGN-associated GAS emm types. There were 46 emm types among the 676 cases described in 15 reviewed articles. Only 43% APSGN cases would have had theoretical coverage from the experimental M protein-based GAS vaccine. Vaccine coverage was higher in regions such as North America (97%) and the United Kingdom (98%) than Africa (67%) and Australia (38%). Variable vaccine coverage against APSGN- associated emm types highlights the need for further research into this disease, particularly in settings of poverty, where APSGN prevalence is higher. Three GAS emm types (emm49, emm60, and emm55) consistently occur in APSGN cases around the world. Future studies would therefore benefit from examining the genomic epidemiology of these emm types to unravel potential markers of APSGN.