Procedures for sample collection and processing. 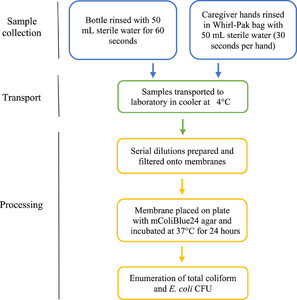 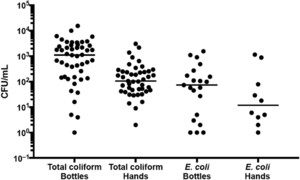 Feeding of infant formula using contaminated bottles may be an important transmission pathway of enteric pathogens during early life. Determinants of suboptimal bottle hygiene and the feasibility and acceptability of intervention strategies have not been well assessed. We evaluated the extent of bottle contamination, its contributing factors, and options for promoting improved bottle hygiene in a Peruvian shantytown. During Phase 1, we sampled from bottles and caregiver hands (n = 48) and processed for enumeration of total coliform and Escherichia coli colony-forming units. A semi-structured questionnaire captured bottle use and hygiene practices. Phase 2 involved the identification of candidate practices to recommend to caregivers. Phase 3 consisted of a behavioral trial in which 14 caregivers were educated about improved practices for bottle disinfection and later reported on their experiences implementing them. Fecal bacteria were detected in 43.8% of bottles sampled during Phase 1 and in 21.7% of hands. Caregivers overall did not use effective methods for disinfecting bottles, displayed misunderstandings surrounding hygienic practices, and few had ever discussed bottle hygiene with a health provider. Findings from the behavioral trial indicated that the improved practice of brushing the bottle with dish detergent for 30 seconds after every use is preferable to boiling the bottle for several minutes daily as caregivers reported that the brush was simple to use, efficient, and practical. The promotion of a bottle brush and detergent is a feasible and acceptable intervention strategy in peri-urban settings, and future research should evaluate its long-term effectiveness for reducing bottle contamination.