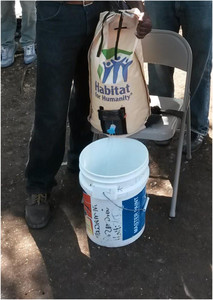 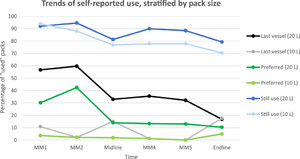 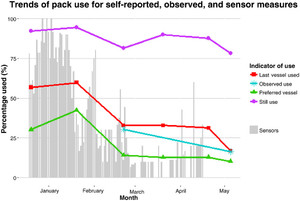 Alternative Water Transport and Storage Containers: Assessing Sustained Use of the PackH2O in Rural Haiti

The PackH2O water backpack carrier was developed to provide safe storage and relieve stress of head-loading during water transport with traditional containers such as buckets and jerry cans. We conducted an evaluation to assess both self-reported and observed use over a 6-month period between November 2014 and May 2015. A total of 866 packs were distributed to 618 households in six communities in rural Haiti, and 431 and 441 households were surveyed at midline and end line, respectively. We performed linear regression to assess change of self-reported use over time. Although 79.3% of respondents reported continued use of the 20-L pack after 6 months, other measures of self-reported use were low, with only 16.8% reporting to have used the pack the last time they collected water and 10.3% preferring the pack over other water collection containers. In addition, only 10.2% of all people collecting water at community sources were observed using packs and 12.0% of all households surveyed had water in the pack at the time of visit. Pack use varied by community and demographics. Although women were targeted during distribution, men preferred the pack and were more commonly observed using it at the community water sources. In conclusion, the use of the PackH2O was not widely adopted in rural Haiti; however, further research is needed to assess the pack acceptance in areas where back-loading is more common and in emergency settings.