Success of antituberculosis (TB) treatment in homeless and non-homeless patients (HIV+ and HIV−) according to new or previously treated TB case.

Success of antituberculosis (TB) treatment in homeless and non-homeless patients (HIV+ and HIV−) according to whether diagnosis of TB was made in inpatient or outpatient setting. 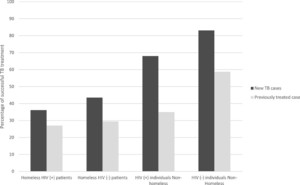 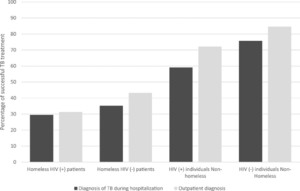 Homelessness and HIV: A Combination Predictive of Poor Tuberculosis Treatment Outcomes and in Need of Innovative Strategies to Improve Treatment Completion

Antioquia Department is the state with the highest burden of tuberculosis (TB) in Colombia. Our aim was to determine the risk factors associated with unsuccessful TB treatment in HIV-seropositive and homeless persons, compared with non–HIV-infected and non-homeless persons with TB. We conducted a retrospective cohort study using observational, routinely collected health data from all drug-susceptible TB cases in homeless and/or HIV-seropositive individuals in Antioquia from 2014 to 2016. Unsuccessful TB treatment was defined as individuals having been lost to follow-up, having died, or treatment failure occurrence during the study period. Successful treatment was defined as cure of TB or treatment completion according to the WHO definitions. We identified 544 homeless persons with TB (432 HIV− and 112 HIV+), 835 HIV+ persons with TB and non-homeless, and 5,086 HIV−/non-homeless people with TB. Unsuccessful treatment rates were 19.3% in HIV−/non-homeless persons, 37.4% in non-homeless HIV+ patients, 61.5% in homeless HIV− patients, and 70.3% in homeless HIV+ patients; all rates fall below End TB strategy targets. More than 50% of homeless patients were lost to follow-up. Risk factors associated with unsuccessful treatment were HIV seropositivity, homelessness, male gender, age ≥ 25 years, noncontributory-type health insurance, TB diagnosis made during hospitalization, and previous treatment for TB. These results highlight the challenge of treating TB in the homeless population. These findings should put an onus on TB programs, governments, clinicians, and others involved in the collaborative care of TB patients to pursue innovative strategies to improve treatment success in this population.